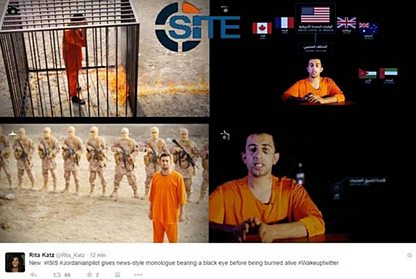 I had to take Dymphna to the dentist today, and was gone all afternoon. A little while before we left email tips started coming in about the immolation by the Islamic State of the captured Jordanian pilot Mouath al-Kasaesbeh. I only had time to grab them and add them to tonight’s news feed dataset just before we left.

Coming on the heels of the story about Maria P. in Berlin, we may conclude that Islam has a thing about burning people alive.

I’m glad I posted the Israeli satire of an ISIS beheading video before the latest news broke. Otherwise I would have been reluctant to inject humor into such a horrific moment.

However, I can’t agree with those who maintain that it’s in poor taste to engage in mockery while the Great Jihad is still being waged against us, before the war is clearly won. I maintain that humor is an absolute necessity at times like these.

A case in point is Spike Jones’ classic send-up of the Nazis in “Der Fuehrer’s Face”. It was released in 1942, before it was at all obvious that the Allies (and especially the British) were going to be victorious over Hitler:

Maybe it isn’t a European tradition to make fun of your enemies during wartime, or at the moment when it seems that all hope may be lost. But it sure as heck is an American tradition, especially among Celtic Americans.

And it seems to be an Israeli one, too.

Below are excerpts from news reports about the execution of Mouath al-Kasaesbeh (with several variant spellings of his name).

(Reuters) – Islamic State militants released a video on Tuesday appearing to show a captured Jordanian pilot being burnt alive in a cage, a killing that shocked the world and prompted Jordan to promise an “earth-shaking” response.

A Jordanian official said the authorities would swiftly execute several militants in retaliation, including an Iraqi woman whom Amman had sought to swap for the pilot taken captive after his plane crashed in Syria in December.

Reuters could not immediately confirm the content of the video, which showed a man resembling airman Mouath al-Kasaesbeh standing in a small black cage before being set ablaze.

The furious reaction of the Jordanian authorities made clear they treated it as genuine.

(ANSAmed) – ROME, FEBRUARY – Jordan announced that the pilot shown being burnt alive by the Islamic State (ISIS) in a video released on Tuesday had actually been killed on January 3.

It added that this was why ISIS had refused to provide proof that he was alive, the BBC quoted Jordanian television as saying.

The Islamic State has released a video, purportedly showing Moath al-Kasasbeh, the Jordanian pilot captured in December, being burned alive. The Jordanian government had pleaded to release the hostage in exchange for a captured terrorist.

Jordan says that he was killed on January 3

(ANSAmed) – AMMAN – A video released on Tuesday by the Islamic State (ISIS) and posted on the website of Site Intelligence Group reportedly shows the Jordanian pilot held hostage by the jihadists as he is burnt alive. SITE director Rita Katz reported the news on Twitter. The footage starts out with a close-up of the hostage in an orange jumpsuit and bruised under his right eye as he makes a statement. There is a black backdrop with flags from countries taking part in the anti-ISIS coalition, including Canada, France, the US, the UK, the UAE and Jordan. In the second part, the Jordanian pilot is standing in front of a group of armed militants dressed in camouflage with their faces covered. In the final part the hostage is seen in a cage as fire approaches and surrounds him.

Jordan announced that the pilot shown being burnt alive by the Islamic State (ISIS) in a video released on Tuesday had actually been killed on January 3.

Minutes after the news broke out, the government reportedly sent a number of salafi convicts to Swaqa prison, were executions often take place. The king could be poised to make a statement and order execution of Sajeda al Rishawee, the failed al Qaida bomber in Amman whose release was demanded by Isis in exchange for the Japanese journalist Kinje Koto.

After ISIS releases video of Maaz al-Kassasbeh’s execution, official says female suicide bomber, 4 others, to be killed in response.

Just hours after a video surfaced showing the ISIS terrorist group executing a captive Jordanian pilot by burning him alive, Jordan is preparing to execute five terrorist prisoners in revenge, according to a report.

Speaking to Sky News Arabic under condition of anonymity, a Jordanian security official claimed Sajida al-Rishawi – a failed female suicide-bomber whose release ISIS had demanded in a previous video in exchange for Japanese hostage Kenji Goto – would have her execution sentence expedited along with four other Islamist terrorists, in response to the horrific execution of pilot Maaz al-Kassasbeh.

The five convicted terrorists would be executed “within hours” the source claimed.

“The military forces announce that the hero pilot, Muath al-Kaseasbeh, has fallen as a martyr, and ask God to accept him with the martyrs,” Mamdouh al-Ameri said in a statement, translated by the Associated Press.

“While the military forces mourn the martyr, they emphasize his blood will not be shed in vain. Our punishment and revenge will be as huge as the loss of the Jordanians,” he added.

Meanwhile, US President Barack Obama issued a response to the gruesome execution video Tuesday, saying that if it was authenticated it just shows the organization’s “barbarity”, and would strengthen the resolve of the international coalition mobilized against it.

“Should in fact this video be authentic, it’s just one more indication of the viciousness (and) barbarity of this organization,” Obama said, adding it would “redouble the vigilance and determination on the part of the global coalition to make sure” ISIS is “ultimately defeated.”

Meanwhile, Jordanian state TV reported that al-Kassasbeh was in fact executed as early as January 3rd.

ISIS had previously offered to free Japanese hostage Kenji Goto in return for Sajida al-Rishawi, but the deal stalled after the jihadists inexplicably balked at Jordan’s demand for proof that al-Kassasbeh was alive.

If reports he was in fact executed as far back as a month ago are true, it would mean he was already dead when the offer of a prisoner swap was made.

25 thoughts on “The Incendiary Nature of Islam”