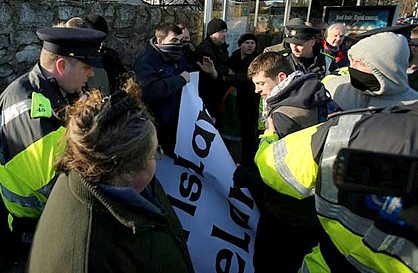 Anti-Islamization activists stage a demonstration at the Clonskeagh Mosque (a.k.a. the Islamic Cultural Centre of Ireland) in Dublin yesterday. Those in attendance included people interested in starting an Irish chapter of PEGIDA.

The demonstrators were attacked by a larger group of “anti-fascists”, and had it not been for the presence of sufficient numbers of Gardaí, the anti-Islamists might have suffered bodily harm. As it was, the AFA paramilitaries managed to rip up one of the demonstrators’ banners (see the video below the jump).

Mark Humphrys has an informative page on the Clonskeagh mosque:

There’s much more detail about the Ikhwan connections at that page, for readers who are interested.

A demonstrator who was present at the Clonskeagh Mosque yesterday sends this report:

I must say first that the protest was not a PEGIDA protest, but an Anti-Islam Ireland protest. I was there to see what would happen and how it would happen.

Only about eleven people turned up out of the fifty or so who said they would.

At the start only four of us were there. After this four others came. As that group was coming to meet us they were attacked by AFA members (anti fascist alliance [Antifa]). The AFA had about forty-five members there. This will be the most they will get there, more or less, because they thought we were having over fifty coming.

The police were in front of us, but allowed the AFA to come behind. With this the AFA people ripped up a banner. However, this was good for us, because RTÉ [Raidió Teilifís Éireann, Radio Television Ireland, the state broadcaster] saw the whole thing. There were other media people there, and photos were taken of the way the AFA was acting.

The Muslims came out with tea and dates for us, but we were all very polite and said, “No, thank you.”

After the protest was over I made sure the police gave us all a safe passage to our cars. The police were aware that these AFA people are the same ones that are making all the trouble in the water meter protest in Ireland.

Once we got into our cars, we went to a meeting place, and I think PEGIDA Ireland now has a few members.

I’m happy with the way the protest turned out, because it showed us in a good light, even if the numbers were low. I also think there is no need for another Anti-Islam Ireland protest right now. Rather, we need to have more meetings to attempt a bigger protest.

Below is a media report on the protest. Notice the softball question lobbed at the spokeswoman for the mosque (a native Irish convert?) by the reporter.

Many thanks to Vlad for uploading the above video.

Media news reports on yesterday’s protest at the Clonskeagh mosque:

18 thoughts on “PEGIDA Comes to the Clonskeagh Mosque in Dublin”