Long-time readers are familiar with the work of the Danish psychologist Nicolai Sennels, who recently started a Danish branch of PEGIDA. Mr. Sennels has now been threatened with the loss of his job. Below is a report on the TV debate about the issue from our Danish correspondent Liberty DK. 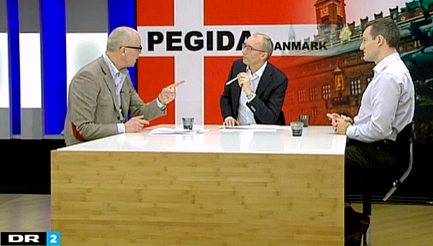 Debate on Danish TV between Rasmus Jarlov (Conservative) and Jan Hoby (Socialist) re Nicolai Sennels, leader of the Danish branch of PEGIDA

The program aired yesterday evening (with a rerun this morning) on Danish TV, on one of our most trusted news channels, DR2. The debate was between Rasmus Jarlov, one of our Conservative leaders and left-winger Über Socialist Jan Hoby from (LFS) the National Association of Social Pedagogues on the topic of Nicolai Sennels and why he should (or should not) lose his job as a psychologist in the public service. An action almost singlehandedly instigated by Jan Hoby, and which has now become quite a public kerfuffle.

In the debate Jan Hoby was virtually frothing at the mouth from repressed rage, stabbing his finger in the air, stuttering with indignation and practically vomiting bile about how inappropriate it is that Nicolai Sennels, a psychologist, should be working for the public service, given his views on humanity. In the debate he was throwing around a plethora of seriously libelous claims about how Nicolai Sennels was a “professional racist”, lumping him in with Nazis, racists, anti-Semites, Islamophobes as he in the very same breath proclaimed, in self-aggrandizing self-righteous tones, how WE the people (with himself at the helm of course) draw the line at THAT sort of thing and yada yada yada…

He furthermore pulled all sorts of below-the-belt stuff about how his fellow pedagogues had been suspicious and unhappy and made nervous by Nicolas for a long time. However, when Jarlov challenged this claim, Jan Hoby failed, in any manner, to verify any of said complaints made by anybody about Nicolai Sennels. No letters, no phone calls to so on and soon… nothing. Apparently just his “word”. His explanation of this rather incredible lack of evidence was that they had been afraid of incurring a veritable “s***storm against Muslims, thereby threatening their freedom of expression”…

Rasmus Jarlov was very cool, calm, collected, factual and well-spoken during the entirety of the debate. While he said that he didn’t always agree with Nicolai, he stuck to his guns and insisted that freedom of expression was a cornerstone of our society and must not be tampered with in order to promote a particular political agenda. He made a quite clear and concise point that it was very very obvious to him that Jan Hoby was merely out to wipe out a political competitor and put a gag on freedom of speech, and attempting to, as socialists are wont to do, stifle/kill public debate/opposition… Freedom of expression — as long as it is their views that are expressed, of course.

Then as the coup de grace, a photo was shown on the screen of Jan Hoby’s office with a bust of Ho Chi Minh and a framed picture of Lenin proudly and prominently displayed, after which the host of the debate Niels Krause-Kjaer confronted Hoby as to the appropriateness of a display in his office of these two questionable gentlemen whilst at the same time questioning Nicolai Sennels “view of humanity”? A clearly legitimate question which Hoby blithely and offhandedly dismissed with “it’s not the same thing”.

Of course it isn’t. It’s far worse, if you ask me.

It was a slam-dunk, an ignominious defeat of Jan Hoby, showing him in no uncertain terms as the loudmouth Communist clown that he is (in full rabid bloom), and Rasmus Jarlov as a CLEAR winner in the debate. It was an absolute pleasure to witness, and I would be sincerely shocked should Nicolai lose his job. Perhaps Denmark is really starting to shape up! Wouldn’t that be nice…

Sweden may be lost, but we aren’t yet.

12 thoughts on “Nicolai Sennels and PEGIDA in Denmark”