Update: Vlad has uploaded the missing video to LiveLeak, and I changed the embed. 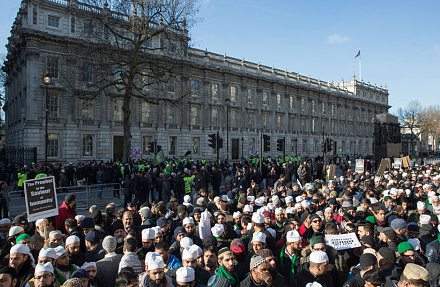 A large crowd of “Britons” gathered in Downing Street today to protest the cartoons of Mohammed published by the French magazine Charlie Hebdo, and against insulting the prophet in general. Estimates of numbers run from 1,000 (The Telegraph) to 10,000 (the organizers, and also Breitbart).

The event was organized by a group known as the Muslim Action Forum:

Shaykh Tauqir Ishaq, a senior spokesman for the Forum, said “Perpetual mistakes by extremists, either by cold-blooded killers or uncivilised expressionists, cannot be the way forward for a civilised society.

“The peace-loving majority of people must become vociferous in promoting global civility and responsible debate. At this time of heightened tension and emotion, it is crucial that both sides show restraint to prevent further incidents of this nature occurring.” [emphasis added]

In other words, “cold-blooded killers” and those who draw cartoons of Mohammed are “extremists” of the same magnitude. “Both sides” make “mistakes” and must practice restraint.

This is the sort of false equivalence of which Barack Hussein Obama might approve!

Actually, under Islamic law, the protesters are quite correct when they insist that the only way to achieve harmony among diverse communities is for everyone to refrain from insulting the prophet Mohammed. Shariah makes exactly this requirement, which applies to Muslims and non-Muslims alike. Those who do not heed it are guilty of Islamic slander (ghiba), the penalty for which is death.

This means that the assassins who carried out the Charlie Hebdo massacre were simply executing the prescribed sentence for ghiba in the time-honored, ad-hoc fashion as practiced so often in shariah-based societies.

Yes, harmony will indeed come to Britain as soon as parliament criminalizes insulting Mohammed and all the other violations of shariah that are now so rampant in British society.

The video below features one Abu Tahir speaking at today’s event:

Update: Whoops! By the time I got the post together, the video had been yanked. Too bad — if another version of it surfaces, I’ll use that.

Below are excerpts from a Breitbart article about today’s protest in London:

Ten thousand Muslims are protesting outside Downing Street and the Ministry of Defence against the publication of cartoons depicting Mohammed. The cartoons — which led to the brutal massacre at the French magazine Charlie Hebdo — were described by the group as a “violation of Islamic law”.

The crowd held banners saying “Charlie and the abuse factory” and “learn some manners” as they called for the world to observe Muslim blasphemy rules. The group taunted the grieving families and supporters of the murdered Charlie Hebdo journalists by using the “#JeSuisCharlie” hashtag to tweet pictures of the rally.

Men and women were divided within the protest as they waved a huge “Be Careful With The Prophet” banner close to the Cenotaph. The sign was widely taken as a direct threat to British military forces, whose lives are commemorated at the memorial.

The protest was organised by the Muslim Action Forum (MAF), which said that the Charlie Hebdo cartoons had helped “sow the seeds of hatred” and had damaged community relations.

British media refused to show the Charlie Hebdo cartoons, despite repeated requests from French journalists. This led Shaykh Noor Siddiqi, from the MAF to tell the rally: “The actions of the UK media in not publishing the cartoons is highly appreciated by British Muslims and we hope that this kind of self-restraint and mutual respect will ultimately lead to a harmonious society.”

There’s more at The Telegraph.

Hat tips: For the video, Vlad Tepes; for the Breitbart article, Gaia.

31 thoughts on ““Freedom of Speech Has Boundaries””