The following essay was adapted from comments I made the other night on Takuan’s post.

Counterjihad writers and commenters often describe the fate that awaits our current political leaders when their new Islamic masters — whose ascendancy they are enabling and encouraging — assume control of what used to be Western Civilization. Frequent reference is made, quite correctly, to their corrupt, mendacious, and treasonous behavior. They are said to face an unpleasant surprise when their feckless actions inevitably lead to their overthrow and subjugation, and possibly even their violent demise.

According to this analysis, our political elites — who expect to be spared the consequences of their pro-Islamic policies — will be in for a shock. However, I don’t think they are mistaken in their assumption that they will be spared when the hosts of Mohammed finally become their overlords.

The most frequently cited model for Islamic conquest is the siege of Constantinople in 1453. The invading Muslim horde surrounds a beleaguered infidel city, summons the civil and military authorities, and demands their surrender and submission to the will of Allah.

If they refuse, their city is attacked and overwhelmed. Their lives are forfeit, and the victorious troops are allowed a statutory three days of indiscriminate slaughter, rape, looting, and destruction. After that the plunder is gathered and divided according to the rules established by the sharia. Infidel men are systematically slaughtered, unless specifically spared by the military commanders. Women and children are sold into slavery. What remains of the city is organized as an Islamic vassal state under an appointed suzerain, and thereby incorporated into the Ummah.

If, on the other hand, the city fathers agree to surrender, their lives will be spared for the moment. The Muslim troops enter the city and disarm it. All infrastructure and property is ceded to the invaders, who will keep what they wish, with official title held by the waqf, or Islamic trust. The infidels who remain in the city will become inferiors with the status of dhimmi, protected by the “pact” of safety established by their submission. Their property and persons will in theory be safe, but in practice they may be robbed, assaulted, and killed with impunity, and their women and children taken as slaves, because the prescribed punishments for a Muslim who harms a dhimmi are light to non-existent.

Yet there is a third, lesser-known way that non-Muslim states may become Islamic. Mohammed instructed his followers that “war is deception”, and recommended that his armies take new territory without shedding the blood of Muslims, if possible. A targeted state might be conquered by stealth and subterfuge, rather than subdued by military conquest. By careful infiltration, by the use of bribery, and above all by the subornation of local political leaders, the state might be undermined and overthrown without ever drawing a scimitar against it.

In Mohammed and Charlemagne Revisited

, Emmet Scott presents compelling evidence that the pre-Islamic Persian state was Islamized from the top down. That is, members of the ruling class were threatened, bribed or otherwise suborned to force conversion to Islam. The existing apparatus of the state then imposed Islam on the rest of the populace, before the Arab invasions ever began.

The same model could very well be applied to our Islamic future. In countries whose leaders surrender peacefully to Islam, the elite dhimmis are allowed to retain many of their privileges and perks. They are employed as administrators, assigned to keep order and suppress any uprisings against the new regime by the dhimmi hoi polloi. This is a strategic necessity, because Muslims are usually in the minority for an extended period after their conquest of new territory. 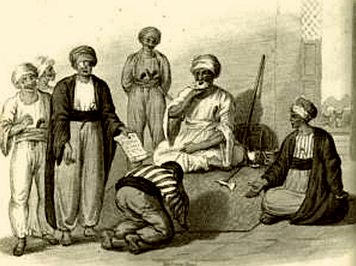 The old elites function as the new nomenklatura in the hybrid Islamic/infidel society that persists for a time after the conquest. Their haram behavior is ignored if it remains sufficiently quiet. They may continue in their accustomed voluptuous lifestyle, and their children will be spared the worst treatment by their new overlords.

It will of course become much easier for them if they formally convert to Islam. Then they can be fitted seamlessly into the new ruling caste, albeit as members having a lower status — they will be considered inferior to the Arabs or Deobandis of South Asia in perpetuity, no matter how many generations have been born Muslim.

Life will be quite comfortable for the highest layers of the old oligarchy, at least for a while.

It has become obvious in recent years that most of them are cynical opportunists, with no core beliefs in particular, never mind ethics. Many of them will probably just go through the forms and convert. Why not? It isn’t as if they are sincere, believing Christians (or Jews).

Those who want to attain high office in the United States traditionally join a church and sit in the pew every Sunday. It is simply a political necessity, like kissing babies and drinking coffee with the plebs at the local diner.

And that’s what reciting the shahada will be in the Brave New World Order: a key to unlock the door to power, wealth, and sybaritic pleasure under our new masters.

Ambitious self-serving Western politicians may do quite well under the Ummah. In three or four generations they will still be giving us orders, but only as well-fed trusties in our new Islamic prison — they won’t be eligible for the position of Warden.

Our supreme rulers in their gilded palaces will be the descendants of the Umayyads or the Gurkani. Our blue-eyed apple-cheeked politicians will live the good life as their vizirs, administering the various emirates formed out of the remnants of Western Civilization. Their daughters, if well-favored, will be prized in the harem (if infidels) or as wives (if Muslim) of the Emir, or even of the Caliph. But they themselves will be despised toadies, fit only to occupy minor palaces and collect the jizya from the dhimmis placed under their charge.

Oh, yes, it’s likely that our leaders will indeed go gentle into that good Islamic night. After all, it won’t be such a bad deal for them.

It’ll be pretty rough on the rest of us, however. But our welfare has never been of great concern to them in the past. Why should it be any different when the Ummah comes to town?

53 thoughts on “Ask Not For Whom The Muezzin Ululates”