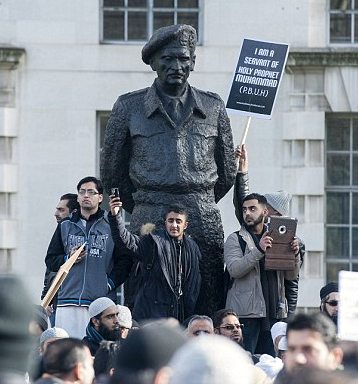 A Typical Week in Dhimmi Britain
by Paul Weston

It is amazing — in a rather horrifying way — to track the antics of the Religion of Peace in what was once Great Britain. News over the last few days serve only to reinforce my belief that British politicians and media journalists have already submitted before Allah, or have large off-shore bank accounts bulging with treacherous blood money as a reward for betraying their country.

If this sounds a bit far-fetched, consider the peculiar behaviour exhibited by our supposedly impartial journalists over the weekend. The EDL held a march in Dudley on Saturday, protesting about the building of yet another mega-mosque which the vast majority of local people are firmly against. Some 1,000 plus patriotic Brits turned out for the event. A peaceful march ensued and a number of speakers outlined why it was not really a good idea to add another propaganda centre for Islam in the town.

Around fifty delightful young chaps from David Cameron’s UAF friends and Antifa also turned out, all dressed in black with balaclavas thoughtfully covering their scowling and hate-contorted faces lest cameras catch their violent behaviour carried out in the name of “anti-racism” — which is something of a misnomer when one considers the virulent racial hatred they feel toward the native British.

Of these fifty upstanding examples of decency and compassion, thirty were arrested (see video) after they attacked the police. Curiously though, all the media headlines were along the lines of “Thirty arrested at EDL demonstration in Dudley”, leading the low-information reader to assume all those arrested were from the EDL. In point of fact, no EDL supporters were arrested at all.

The Birmingham Mail was guilty of blatant propaganda here, but rather foolishly allowed their comment board to remain open. Within a few hours hundreds of people pointed out their story was a tissue of lies and disinformation. Some questioned the ethics of modern day Birmingham Mail journalists and publicly mused as to whether the propaganda they pumped out was in line with the integrity one expects from those who purportedly exist to tell us the unvarnished truth.

Having been caught in-flagrante as it were, the Birmingham Mail took the only course of action available to such an honourable edifice of truth telling… and deleted all the comments whilst making no attempt whatsoever to edit the article in order to reflect truth and objectivity. The editor is a chap called David Brookes who may be contacted at David.Brookes@trinitymirror.com should readers wish to drop him a line…

On Sunday another demonstration occurred, this time held by thousands of Muslims outside Prime Minister David Cameron’s temporary London pied-a-terre in Downing Street. Some people have noticed how hard it is to get large numbers of Muslims onto British streets to state “Not In My Name” regarding paedophile rape gangs, beheaders of British soldiers or blowers-up of London tube trains, and sure enough this large gathering had nothing to say about such errant Muslim behaviour. They were more concerned about abolishing free speech you see, particularly with regard to free speech about lovely, peaceful old Mo by those rascals at Charlie Hebdo magazine.

Along with the black flag of ISIS they carried placards telling us to “Learn Some Manners” and other tactfully cohesive messages such as “Freedom of Speech=Hatred to Muslims.” They swarmed over the Cenotaph and a statue of Field Marshal Montgomery, although to be fair they probably had little idea who he was other than some dead white English oppressor. I don’t expect they know what the Cenotaph symbolises either; after all, they never turn out on Remembrance Sunday unless it is to Islamically demonstrate within earshot of the old soldiers paying their respects to fallen comrades.

And therein is a tale of two demonstrations. The British media are prepared to lie and mislead about the one supported by the English, and in the case of the BBC to totally ignore the one portraying Islam in a bad light. They claim this is done in order to promote Community Cohesion but I think all those who saw these arrogantly intolerant savages desecrating our war shrines will have little time for Community Cohesion anymore — just as they have little time in believing Lions and Antelopes can co-exist in a thoroughly modern, progressive, non-carnivorous sort of happy-clappy Utopia.

How can we tolerate the intolerant? And is there anything in the world more intolerant than Islam?

I rather doubt it. Their intolerance even goes beyond the grave, as in the case of the non-Muslim “Shady” Shadrack Smith who has been buried in a multi-faith cemetery in Burbage, Leicestershire, without taking into account the multicultural views of a Muslim family’s distaste about the proximity of their own deceased’s nearest and dearest to a nasty old infidel.

Having made their vociferous objections about this flagrant breach of multi-faith tolerance, Burbage Parish Council have contacted Mr Smith’s family asking them if they would mind awfully if they dug up poor old Shady and moved him to another location where he could then stop giving eternal offence to Islam. Or as Councillor Richard Flemming put it:

“Burbage Parish Council provides an award-winning cemetery for the benefit of the whole community…unfortunately the parish council has recently received representation from two families regarding the allocation of adjacent grave plots within Burbage Cemetery…the parish council is sympathetic to the feelings of both families concerned and is committed to working with the relatives and the wider community to reach an amicable and acceptable solution.”

Memo to Councillor Fleming — why don’t you just tell the Muslim family to naff off? It is, after all, a multi-faith cemetery serving the wider community… oh sorry, silly me. I almost forgot the way things work in Britain these days.

Other examples of Islamic intolerance over the last few days are as follows: Brustholm Ziamani was stopped by police on his way to behead another British soldier. Two young female cadets were threatened with a spot of casual beheading as they left an army reserve centre. Channel 4 newsreader Kathy Newman was escorted out of Streatham mosque after naively thinking a national open day for mosques was to be taken literally.

Undercover footage emerged of Muslims torturing sheep in a halal slaughterhouse. Tower Hamlet’s extremist Muslim Mayor has been accused of electoral fraud and of utilising intimidation and threats. He responded with the ubiquitous display of Muslim victimhood and branded his accusers as racists and Islamophobes. Zain Mohammed, a government employee, is being investigated by the police for stating his disappointment with Hitler for not wiping out the entire Jewish race. To date, however, no arrest has taken place. Meanwhile, Anti-Semitic attacks doubled in Britain in 2014.

British police have called for extra funding because they are now arresting multiple Muslims every day for terrorist activity. Perhaps they should allocate their money more wisely and desist from tracking down harmless old English women who had the anti-Islamic temerity to purchase Charlie Hebdo magazines from the local newsagent? The police should really work out which side they are on here, particularly so when they have been warned not to wear their uniform to work, thereby attracting the attention of cop-killing threats from the Religion of Peace.

Churchillian wannabe leader David Cameron bravely stated he was taking the fight against Islamic extremism to soaring new levels. He growled theatrically: “We have got to go after the hate preachers, we’ve got to go after the radicalisation” and then promptly let hate preacher Muhammad Salah into the UK where he could continue to call for murder and mayhem. Meanwhile, the ban on civil rights activists Robert Spencer and Pamela Geller was upheld by the Court of Appeal, so unlike Muhammad Salah they will not be allowed to enter Britain.

Other political news relates to the Labour Party’s Sadiq Khan, a friend of the convicted Al-Qaeda terrorist Babar Ahmad. Mr Khan wants to contest the election for Mayor of London and is progressing very well. He currently stands in second position in terms of voting support from his Labour chums.

The recriminations from the Rotherham gang rape obscenity continue with the Labour Party accused of deliberately covering up the Muslim rape in order to maintain the Muslim vote. The entire Labour council has resigned, but it now transpires many have gone on to lucrative jobs at other Labour councils — some in charge of safeguarding children. The disgraced former deputy council leader Jahangir Akhtar was asked if he wanted to apologise to the victims of sexual abuse. Mr Akhtar said no, he did not…

On a final note, the British government has noticed there are more British Muslims fighting for ISIS than there are British Muslims in the British army. In order to redress this “inequality” there is now a recruitment drive to swell the ranks with Islam. What could possibly go wrong? General Sir Nicholas Carter, chief of the general staff, thinks nothing could go wrong at all if we train Muslims in the use of firearms and explosives. He said: “Our recruitment from the black, Asian and minority ethnic communities has been improving over the years, but it is nowhere near where it needs to be. We have to do more.”

One of the most senior Muslims in the army, Imam Asim Hafiz, Islamic adviser to the chief of staff, said diversity was one of the UK’s strengths and this enhanced the military’s cultural understanding and helped them when deployed. “In my view, the values of the armed forces are fully compatible with the values of Islam as well as other faiths.” Isn’t that just marvellous? I do hope it won’t lead to incidents of “workplace violence” a la Fort Hood.

So all in all, not a bad week really. Not good for Britain of course, but jolly good for Islam. All things considered.

23 thoughts on “A Typical Week in Dhimmi Britain”