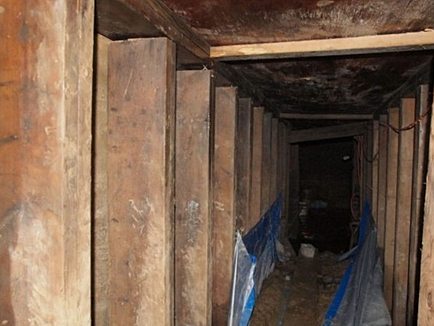 Back in January, after receiving a tip from a local resident, Toronto police discovered a mysterious tunnel in a wooded area in the middle of the city. It was situated in Black Creek Parkland, near York University’s Keele Campus, and a short distance from the Rexall Centre, one of the venues that will be used in this summer’s Pan Am Games. It was about thirty-three feet long, ten feet down, and high enough for a man to stand in.

The construction of the tunnel showed some engineering sophistication. The walls and ceiling were carefully braced and reinforced. A generator and wires provided electricity for water-resistant lighting, and for a sump pump to draw off the water that seeped into the lower end of the tunnel. At least two people were involved in the digging of the tunnel. There were indications that the unknown persons involved in the construction were trying to conceal their work: a separate hole equipped with sound-muffling foam was dug to contain the generator, excavated dirt was removed from the immediate vicinity of the holes, and both entrances were covered and camouflaged.

After the police completed their on-site investigation and sent off all the material for forensic examination, they filled in the hole and made the existence of the tunnel public. The first news about it was published by the CBC early last Tuesday (February 24). The Toronto Police held a press conference later that day to release relevant information about the public to the assembled media.

There’s something more than a little strange about that press conference. Watch for yourself what Deputy Chief Mark Saunders of the Toronto Police says about the tunnel next to the Rexall Centre, and pay particular attention to which items of evidence he chooses to reveal, and which ones he withholds:

It makes sense that the police declined to display all the items found at the site. As Deputy Chief Saunders said, the specifics of such evidence could be used to test the bona fides of any witnesses that come forward claiming knowledge about the tunnel. Their familiarity with the details of soft drink bottles, food wrappers, gloves, etc. might prove that they had really been familiar with the site.

Inexplicably, the only piece of such evidence that the police chose to reveal was also the most unusual and unexpected: a set of rosary beads with a Remembrance Day poppy attached, which they say had been hung on a nail hammered into a timber in the tunnel.

Why showcase that particular item? Surely a rosary and poppy would be much more likely to uniquely identify the excavation than a McDonald’s wrapper or a Pepsi bottle…?

The following photo accompanying the Reuters article on the tunnel is telling indeed: 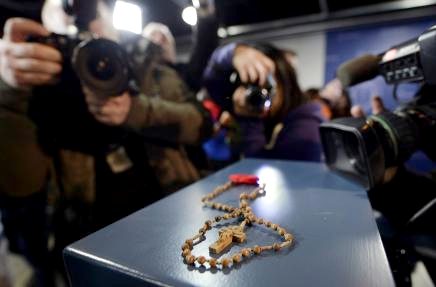 The only piece of actual physical evidence that was brought to the press conference was the string of rosary beads with the poppy medallion attached. Everything else was in big glossy photos or diagrams propped up on the easel.

The juxtaposition of the poppy and the rosary seemed unnatural and discordant, but I was raised a Protestant, so I asked Dymphna to look at the photo. Here’s what she said:

The uneasy conjunction of a poppy and rosary is passing strange, with the emphasis on “passing” — that is, they are echoes from previous generations and from groups of people who probably never had much to do with one another during their stay here. Is this some kind of cross-cultural contamination assembled by an outsider who understood the significance of neither image beyond the fact that they seemed important?

Poppies are Anglo commemorations of dead soldiers we are honor bound to remember so they will not have died in vain. Rosaries, on the other hand, are an ethnic Catholic (think Irish or Italian) veneration of the Blessed Virgin Mary, a religious practice dating back centuries but fading fast in the modern Church.

Yes, the poppy — which is common during Remembrance Day season in both Britain and Canada — is understood as a secular symbol of an important national event. It has a spiritual aspect, but it is not directly religious.

And it is not Roman Catholic. I would expect to see lots of Canadian Catholics wearing poppies on their lapels on Remembrance Day, but not attached to their rosary beads. There is something hinky about that rosary-and-poppy combination.

So what was really going on at that press conference?

As you can see from the photo, the people who staged the event deliberately made a media circus out of their sole piece of physical evidence, placing it on a tabletop of exactly the right diameter and height and then inviting the assembled photographers to push in close and take as many photos as they liked.

Now I’ll take a little walk out onto a paranoid limb: what we see on that table is a conjunction of symbols that could be interpreted as the paraphernalia of a patriotic right-wing Christian terrorist.

Lots of other things about that tunnel are not quite right. According to the police, it could not have made it all the way to the Rexall Centre. It was too shallow — it would have had to have been dug much deeper underground. As constructed, it would only have punched through the hill and come out the other side, still outside the perimeter fence.

Why be so competent and resourceful in the engineering and construction, while being so strategically foolish as to place the tunnel in such a way that it could never accomplish its purpose? Assuming, of course, that the purpose was to make something nasty happen at the Pan Am Games.

The operation was elaborate, technically sophisticated and cost quite of bit of money. Yet it was totally incompetent when it came to achieving its purported goal.

The only possible conclusion is that it was all for show. Dig a bit of tunnel, abandon it with the “clue” left behind, and wait for someone to find it. Or send one of your own people to “find” it. Then wait for the investigation to proceed, feeding in appropriate clues when required.

Someone shows up at police HQ and says he knows something. Police quiz him to see if he knows the secret details the public doesn’t know. When he does, they listen to him. He points them towards the poor deranged neo-Nazi schmoe who’s been set up to take the fall, and whose DNA is undoubtedly on shovel handles and whatnot at the site. And whose fingerprints are on the poppy.

When the story broke last Tuesday night, Vlad immediately said “Hamas”. That’s what a lot of people must have said to themselves when they first heard the news. So, when it turns out to be “radical right-wing Christian terrorists” instead, a whole new equivalence relation is formed in the public mind:

Yes, I know. All this is quite paranoid. But I’ll walk even farther out on this shaky limb and predict a possible future scenario:

The main perp who takes the fall will be a nut case loner Christian white supremacist. He will be a Canadian citizen, but affiliated with an American organization designated as a “hate” group by the Southern Poverty Law Center.

The shadowy group he is a member of will have no real footprint in the past. Just a rented office, maybe, with some file drawers full of SS memorabilia and copies of Mein Kampf. Good for more glossy prints on a display easel at a press conference — but this one south of the border.

One other person will be caught with him. This conspirator will be like the guy who made The Innocence of Muslims, a convicted criminal who agreed to arrange the set-up in order to obtain a lighter sentence. The other conspirators will remain at large and strangely elusive.

Is it a coincidence that the tunnel incident began to unfold so soon after the “Countering Violent Extremism Summit” at the White House?

And when will the capture and arraignment of the perp take place?

How about just before an attempt to implement UN Resolution 16/18 in the United States via executive order?

Nah, Baron, you say. Don’t be ridiculous — you’re just being paranoid again. Take your medication and go to bed.

Below are more recent news articles about the Toronto tunnel. They don’t provide any significant new information, but make for interesting reading:

I was struck by one quote from a forensic expert, who said that he would not expect that there were many opportunities to lift fingerprints from the tunnel, given all the dirt and dust that covered everything. However, that poppy looked nice and clean — I’ll bet it made a dandy surface for picking up the fingerprints of whoever was down in that tunnel, toiling away with pick and shovel.

23 thoughts on “A Tunnel to Nowhere”