Back in the Cold War, the rulers of the Soviet Union and the East Bloc were master propaganda artists who specialized in carefully staged “spontaneous” events. Last Sunday a Potemkin extravaganza of the same sort came to a Paris street, orchestrated in part by a savvy East Bloc veteran herself.

Rembrandt Clancy has translated a brief article on the topic, published yesterday at Politically Incorrect. 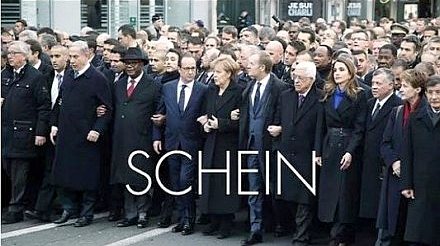 On Sunday in Paris a large solidarity event took place for the seventeen victims killed in the terrorist attack in France. In France’s capital alone, over a million people gathered together in the streets to express their condolences and to demonstrate against terrorism and for freedom of speech. In the first row of this impressive gathering of people walked France’s President Francois Hollande, FDJ Secretary* Chancellor Angela Merkel, Italy’s Prime Minister Matteo Renzi and dozens of other heads of state and government. In a symbolic gesture they locked arms and mixed together with the “common” folk, in order to demonstrate cohesion. Or so it appeared.

However, politicians and media have still not understood that in the age of the Internet one must exert a little more effort if one wants to be s***ting the people [das Volksverarschung] and deceive them. As can be seen in the photo below, they would not dream of mixing with the citizens, who are in any case contemptible; rather they staged a dissembling comedic farce which can only bring shame upon these people. 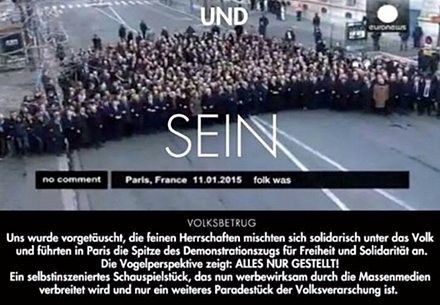 Deception of the People

It was feigned that the refined lordships mingle in solidarity with the people and form the vanguard of the demonstration for freedom and solidarity.

The bird’s eye perspective shows: EVERYTHING IS STAGED!

A self-staged pantomimed piece, which is now being spread in a promotionally effective manner by the mass media, and which is only another showpiece for s***ting the people [Volksverarschung].

Even the state-loyal Spiegel Online noticed this shabby staging:

The photos were not taken on the streets and squares on which hundreds of thousands were demonstrating, but on a secluded side street, as The Independent and Daily News reported. According to French media, the scene was filmed in the Place Léon Blum in the vicinity of Voltaire Metro Station. The place was chosen on account of the symbolic meaning of the name. The filming took place at 15:30. After just a short time the senior politicians got back into their vehicles and drove away, according to Le Monde. […] Photos which had been taken from a distance show that the state and government leaders formed their own group — surrounded by security personnel.

One really has to let this melt on one’s tongue, as the politicians and media, in chorus, reproach the tens of thousands of honest and peaceful demonstrators for exploiting the victims for political purposes, when it is the demonstrators who show their sympathy with real credibility; and a few days later, these politicians carry out exactly that same exploitation in a perverted, propagandistic mendacious show. In order to reclaim a few votes from people, whose contempt in any case is all that remains for this impudent band of liars — and that very rightly so — they feign compassion for the seventeen dead people and afterwards drive off to their hotel for coffee and cake, scratching their bellies with laughter. They did not take part in the demonstration in any way, yet for this they want to secure the laurels for themselves. At the same time, even though many people are in attendance and witness the staging, the propaganda broadcasters report that the exalted ladies and gentlemen lead the great demonstration march and, if possible, avoid photographs from angles which would cause the lie to burst.

Perverse! Shameless! Hypocritical! One can longer put into words how ice-cold and calculating this gang is. What was that again about the spark of decency little Heiko?*

* [Translator’s note: In the context of the pending PEGIDA demonstration for Monday,12 January, Heiko Maas, Federal Justice Minister, is quoted in Bild Zeitung (11 January 2015) as saying: “If the organisers had a spark of decency, they would simply call off this demonstration”.]

21 thoughts on “Who Exploited the Victims of Paris, Frau Merkel?”