The University of Alberta believes that a woman should have freedom of choice. She may choose the jilbab, the niqab, the abaya, the kerudung, the paranja, or the chador. If she wants to be really daring, she can even choose the burqa!

There are so many exciting possibilities!

That’s why the University of Alberta has made certain that its female students have access to complete information about all the sartorial modes available to them, so that they can enjoy their liberated undergraduate experience while still adhering to the enlightened code of modesty prescribed by the sharia: 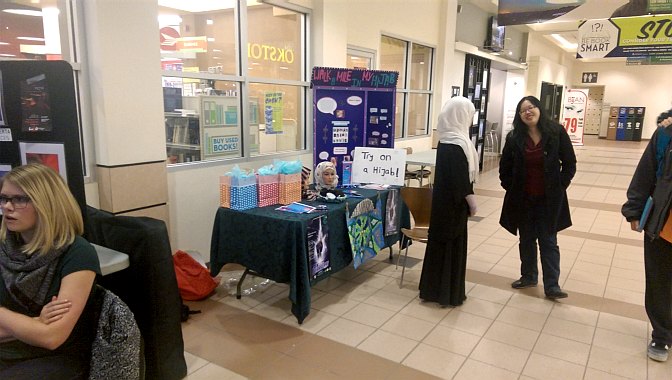 Try on a hijab at the University of Alberta! (Click to enlarge)

The above photo was sent to us by a student at the Modern Multicultural University of Alberta, along with this note:

I was blown away by something I saw on campus. Today in the students’ union building there was a table offering people the chance to ‘Try on a Hijab’. Unbelievable.

I immediately snapped a picture of it.

I will be filing a complaint later today.