Below is an excellent op-ed by Henryk Broder that was published on December 20 in Die Welt. Many thanks to JLH for the translation:

The German Festival of Madness

At the most recent protests, what does not belong together grows apart. On one side, politics which decree what a person here is allowed to think. On the other, the allegedly “stupid” people. 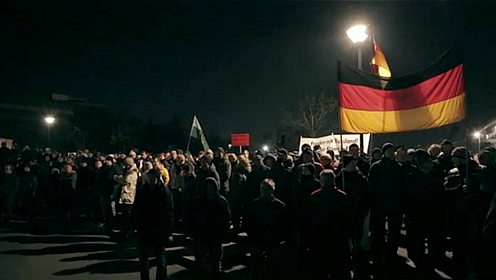 [Video caption: In Dresden, the PEGIDA alliance gathers for the 10th time. 10,000 demonstrators come — more than ever before. The alliance gives itself out as sophisticated. But their statements sound different. (Source: DIE WELT)]

Oh, how we puffed up and trembled with superiority when the election results came in from other countries. These Dutch with their Geert Wilders! The French with Marine Le Pen! Beppo Grillo in Italy, Pia Kjærsgaard in Denmark, Nigel Farage in Great Britain, the Sweden Democrats in Sweden, Vlaams Belang in Belgium. Golden Dawn in Greece — right populists moving into power everywhere in Europe. And we… we could not fathom it.

More — we were outraged, horrified, shocked and repulsed, And when the Swiss voted on a ban on minarets and a limitation on immigration, we called out to the Swiss across the Rhine Falls at Schaffhausen: That’s not the way, dear comrades; you are destroying your democracy.

We acted like a nun preaching morality to the whores on the Reeperbahn. We told them all how to act — like us! But now the bloom is off the rose. First the AfD, then PEGIDA. As if Godfrey of Bouillon were risen from the dead to lead his armies to Jerusalem.

“Of course there is a right to demonstrate in Germany. But there is no place for baiting and slandering people who come to us from other lands,” says the Chancellor. Everyone should “take care that he is not being used by the instigators of such an event.” The party leader of the SPD in the Bundestag, Thomas Oppermann, says “These are not patriots; they are nationalists and racists, who are fanning people’s fears and want to divide society.” The North Rhine-Westphalia interior minister, Ralf Jäger — also SPD — sees “Neo-Nazis in pinstripes” at work here.

That is to say: the chancellor will decide where the freedom to demonstrate ends and persecution and slander begin, just as she has already classified a certain book as “not very helpful.”[1] As for the SPD, who in their long history have been called “vagabonds without a country,” they have developed a litmus test to distinguish patriots from nationalists and racists. Anyone who fails this test is relegated to “Nazis in pinstripes.” They are, as Wolfgang Schäuble says, “a disgrace for Germany.”[2]

What we have been witnessing for several months in Germany is a festival of madness, whose protagonists are not crazed petit bourgeois, not nationalists or racists, not even Nazis in pinstripes, but serious, pillar-of-the-state politicians who are acting like feudal princes at the end of the 18th century, and do not want to share their power and privilege with anyone.

No Stupider Than Augstein and Todenhöfer[3]

The understanding of democracy they reveal is static, not dynamic. Democracy not as a “work in progress” but as finished, and to be preserved as-is. Not a workshop with its activity, with sparks flying, people hammering, sweating; rather a neat little boutique with its wares perfectly aligned on the shelves. And a sign on the door: “All prices as marked. If you wish to bargain, try somewhere else.”

We haven’t seen such paternalism for a long time. Not only are more and more projects declared indispensable[4] — the euro, the change in energy source, the climate — politicians are also competing for mottos: “pick up the people where they are”[5] as if they were invalids or convalescents who cannot walk on their own or are too stupid to get a train ticket out of a ticket machine. But if these people get up and walk on their own and demonstrate, then they are “panic merchants,” “nationalists,” “racists,” and “Nazis in pinstripes.

It doesn’t matter what they are going into the streets for or against, or whether their fears are real or imagined. The only thing that matters is that they are availing themselves of the right “to gather peacefully and unarmed, without prior notice or permission” as guaranteed in the constitution. And the mottos uttered by these “panic merchants” are also not illegal. So far no proceedings against rabble-rousing.

The opinions of the demonstrators may be considered silly, stupid and exaggerated. But they are no stupider than the views given by Jakob Augstein or Jürgen Todenhöfer at Illnjer and Plasberg.[6] Or by the followers of the peace movement in their processions. If only moderate and sensible and correct opinions were allowed, that would be the end of freedom of expression. Everything else is covered in the criminal statutes on verbal abuse, slander and defamation.

What so enrages the elite that they forget their duty to serve the people and instead demand obedience from them? It is the arrogance of the guardian toward the ward — a bottomless contempt for the “people out there in the country.” The people who are constantly exhorted to become engaged, but woe betide them if they do.

The people out there in the country are not stupid. They may never have seen a film by Steven Soderbergh or read a book by Richard David Precht, but they have an instinct for the false, the pathetic, the fraudulent. They sense that something is not right when they are told over and over again that there is no “poverty immigration” but they also hear and read daily that communities are still wrestling with their non-existent problems.

The same is true with Islamization, which is naturally characterized quite differently on the Altona Elbschaussee than the Neuköllner Sonnenallee.[7] Eventually, the willingness to sugarcoat reality, or to allow it to be sugarcoated, is exhausted. Those people out there in the country are not amused by being called “racists,” while a rapper who glorifies violence is being honored for his contributions to integration.

And so, what does not belong together grows apart. On one side politics, which is concerned with such important subjects as the quota of women on supervisory boards in enterprises listed on the stock market; on the other side, the “stupid” people, who demonstrate silently against their disempowerment and thus drive the politicians mad. That’s just crap, one of the pols is heard to say — only 4,000 Muslims live in all of Saxony, just one-tenth of a percent of the population. You can’t talk about “Islamization.”

Buschkowsky: Attempt at an Islamic Land-Grab

Berlin District Mayor Heinz Buschkowsky, SPD, has been speaking for years about what is happening in his district. 320,000 people live in Neukölln — equal to the population of Iceland. “140,000 of them have been swept together here from every corner of the world.” Especially in the schools, there is an “attempt at a gradual land-grab by fundamentalism, with the aim of creating a different social order from what we call Western democracy.”

And when he looks out the window of his mayor’s office “among the passers-by on Donau Strasse and Karl-Marx Strasse, classic, traditional Muslim dress dominates, i.e., “full concealment.” And, he writes in the Capitol City Letter of December 17, “no more than five years ago, it looked very different in Neukölln.”

Is the man a “panic merchant” or a “nationalist” or even a “Nazi in pinstripes?” Or just a realist who tells it like it is? In five years, when Dresden looks like Neukölln and Neukölln looks like Islamabad, we will know more.

14 thoughts on “The German Festival of Madness”