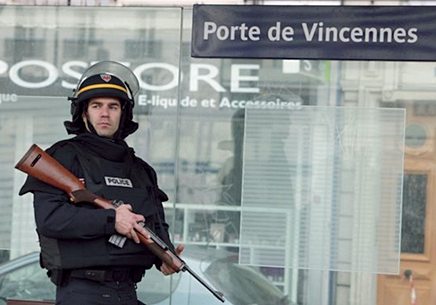 I woke this morning to news of another jihad-related crisis in France — or, more accurately, two crises, one in Dammartin-en-Goele, near the De Gaulle International Airport, and the other in the Porte de Vincennes neighborhood of Paris — and the story kept developing for most of the afternoon. Below is a snapshot of what happened as of about 4pm EST.

The two alleged gunmen still at large after the Charlie Hebdo massacre took a hostage this morning and holed up in a warehouse near the airport north of Paris. This afternoon they were killed in a gunfight with French security forces, and the hostage escaped unharmed.

At about the same time, another mujahid (possibly two) took hostages at a kosher supermarket in Paris. Just after the shootout near the airport, police stormed the market, killing the gunman. It’s possible that he had a female accomplice with him who escaped. Several hostages were also killed.

Below is a report from The Sacramento Bee (more recent reports say that four hostages died at the kosher market):

PARIS — Two al-Qaida-linked brothers suspected in the Charlie Hebdo massacre came out of their hideaway with guns blazing Friday and were killed in a clash with security forces, French police said. Moments later, another hostage-taker in Paris was killed in a separate clash, along with three of his hostages.

France has been high alert since the country’s worst terror attack in decades — the massacre Wednesday in Paris at the satirical newspaper Charlie Hebdo that left 12 people dead.

By Friday afternoon, explosions and gunshots rang out and white smoke rose up outside a printing plant in Dammartin-en-Goele, northeast of Paris, where brothers Cherif Kouachi, 32, and Said Kouachi, 34, had holed up with a hostage.

Audrey Taupenas, spokeswoman for the town near the Charles de Gaulle airport, said the brothers died in the clash. Their hostage was freed.

Another gunman who took at least five hostages Friday afternoon at a kosher grocery in Paris also died in a nearly simultaneous raid there, said Gael Fabiano of the UNSA police union.

The gunman, identified as Amedy Coulibaly, had earlier threatened to kill his hostages if French authorities launched an assault on the two brothers, a police official said. The two sets of hostage-takers know each other, said the official, who was not authorized to discuss the rapidly developing situation.

One other police officer said three hostages also died at the grocery. None could say what happened to the woman listed on a police bulletin as his accomplice.

Security forces stormed the Paris grocery near the Porte de Vincennes neighborhood minutes after news of clashes at the printing plant. Moments later, several people were seen being led out of the store. It was not clear exactly how many hostages had been inside or how many were freed.

Trying to fend off further attacks, the Paris mayor’s office shut down all shops along Rosiers Street in the city’s famed Marais neighborhood in the heart of the tourist district. Hours before the Jewish Sabbath, the street is usually crowded with shoppers — French Jews and tourists alike. The street is also only a kilometer (a half mile) away from Charlie Hebdo’s offices.

The gunman had burst shooting into the kosher store just a few hours before the Jewish Sabbath began, declaring “You know who I am,” the official recounted. The attack came before sundown when the store was crowded with shoppers. Several wounded people were able to flee, police said.

Paris police released photos of Coulibaly, also believed responsible for the roadside killing of a Paris policewoman, and one of a second suspect, a woman named Hayet Boumddiene, who they said was his accomplice.

From Voice of America:

PARIS— French authorities say the two suspects in Wednesday’s Charlie Hebdo attack have been killed during a police raid, and a separate raid in the capital killed another gunman holding multiple hostages at a kosher supermarket.

The two men, brothers Cherif and Said Kouachi, had taken a hostage and were cornered at a print shop in Dammartin-en-Goele, a town about 40 kilometers northeast of Paris.

A police official said the suspected gunman at the supermarket, 32-year-old Amedy Coulabaly, is believed to be the same man who shot and killed a policewoman south of Paris on Thursday. Authorities also are seeking a woman described as his accomplice, Hayet Boumeddiene.

Police sources had linked Coulabaly to the Kouachis, suspected of killing 12 people in the Charlie Hebdo attack.

No one will be surprised to learn that Muslims are afraid of a “backlash”.

45 thoughts on “The Continuing Crisis in France”