Our Swedish correspondent Alfred Fredriksson sends a report on the state of political affairs in Sweden since the recent terrorist atrocities in France. He includes a video that he translated and subtitled himself.

The Swedish Domestic Minister Anders Ygeman said during Folk och försvar (Swedish defense conference) today that it is possible that there will be terror attacks in Sweden. At the same time he strongly criticized opponents of mass immigration and compared them to terrorists. 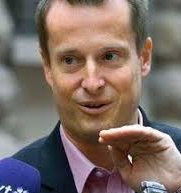 The domestic minister briefly addressed the terror attacks in Paris followed by a long description of Muslims in Europe and Sweden as an oppressed group. He compared critics of mass immigration with terrorists who murder people.

He chose to focus on Merabet because he was a Muslim, but he did not mention the fifteen other people who died in the gruesome attacks. That is not to say Merabet doesn’t deserve our respect and his family our condolences, but not even mentioning all the other people who died is blatantly disrespectful. Afterwards Ygeman focused on the fire at the mosque in Eskilstuna — a fire which after media speculation and a comprehensive police investigation turned out to be the result of an accident, not hate crime against Muslims.

“Dark forces on both sides are trying to make the struggle against terrorism into a war between religions,” he claimed.

Before discussing the likelihood of Sweden’s suffering a terrorist attack he also claimed that the “brothers in Paris were no warriors,” referring to Said and Chérif Koachi who shortly before the terrorist attacks were in the Middle East waging war on behalf of the Islamic State.

“We have to dare to think that this could happen in Sweden and take necessary steps to protect ourselves,” he said and continued, “It is extremely difficult to protect against perpetrators who are prepared to die to harm others. We can’t protect ourselves against everything.”

During the questions after his speech Ygeman admitted that it is easy for immigrants to get Swedish passports — passports often used for smuggling of illegal immigrants and by terrorists who travel to Syria and Iraq to participate in gruesome acts of violence.

“It shouldn’t be possible to obtain ten to fifteen passports; we have to tighten regulations,” he said.

As we can see our Domestic Minister is taking the terrorist threat very seriously. As is our beloved media, who instead of asking critical questions about mass immigration, Islamization and “Swedish” terrorists, are fully occupied proclaiming that they are Charlie.

Nothing could be further from the truth. The Swedish tabloid Expressen who in recent days have proclaimed their devotion to freedom of speech have not always taken the issue as seriously. Last year they hired a left-wing hacker group known as Researchgruppen, which consists of various violent convicted communists who call themselves “the Swedish Stasi.” Their task was to hack the comment system Disqus in an effort to expose ordinary Swedish citizens who write critical comments about Islam and mass immigration on the Internet. These citizens’ details were later published with picture and name, and depicted as racists in front of the entire country. Where was freedom of speech then? Worst of all this communist group was given the “Golden Spade”, a prestigious journalistic prize for their work in exposing the “hate.” 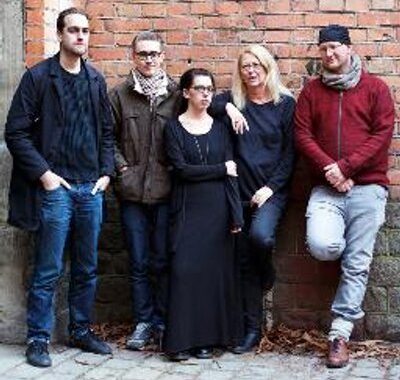 Where was freedom of expression when the provocative artist Dan Park was arbitrarily jailed and isolated for months until he was convicted of inciting hatred?

Dan Park had created various images related to immigration and Islam and was showing them at a gallery in Malmö. Police showed up, confiscated the artwork and arrested Dan Park. He was then jailed in isolation for months until he was convicted of “inciting hatred against minorities”. The entire establishment mass media were completely silent. No one proclaimed, “I am Dan Park!” 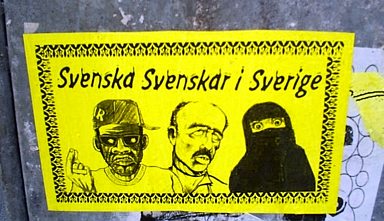 The fact of the matter is that if Charlie Hebdo was a Swedish magazine the publishers would have been jailed and convicted a long time ago, with Expressen and mass media’s silent consent.

Swedish state media slipped up directly after the attacks when their foreign correspondent said on the air that it was not “innocent” people who had been attacked.

The establishment and the media are one. They operate as a unit for mass immigration, for Islam, for the destruction of Western culture and society, oppressing dissent by whatever means necessary. Just as we saw in the forming of the December Junta, where the two political blocs agreed not to provide opposition against one another simply to isolate the patriotic Sweden Democrats and continue mass immigration.

The devotion to Islam and ensuring that the Swedish people are not protected from terrorist attacks became very clear a few nights ago on Swedish TV where the subject of Islamic extremism was discussed. In the video Richard Jomshof, a member of Parliament for the patriotic party the Sweden Democrats (Sverigedemokraterna) debates Mona Sahlin, former leader for the Social Democrats and now the National Coordinator against Violence-Inciting Extremism.

Mona Sahlin does not care enough about the Swedish people’s safety to consider revoking the citizenship of “Swedish” jihadis, as she does not see it having any effect, despite Richard Jomshof’s pointing out that the Charlie Hebdo attack could have been prevented with such a law. The reporter for Swedish state TV trivializes the issue by saying that the law would not have stopped Anders Behring Breivik. The establishment often uses Breivik, the lone wolf madman, to give the impression that terrorism is not an Islamic phenomenon.

The main priority of the Swedish establishment is not to protect Swedish citizens or Swedish interests but to ensure that the terror attacks do not increase “Islamophobia” or lead to “misunderstandings about the peaceful nature of Islam.” But most important is that the heightened risk of terror does not increase the support for the Sweden Democrats, who ironically have been the only party who has warned about increased terror and suggested clear and effective solutions to the problem.

The struggle against the “racists” and “xenophobes” and the continuation of mass immigration and destruction of Swedish culture and Swedish society is far more important than democracy, freedom of expression or even Swedish lives.

20 thoughts on “Sweden: A Democratic Joke”