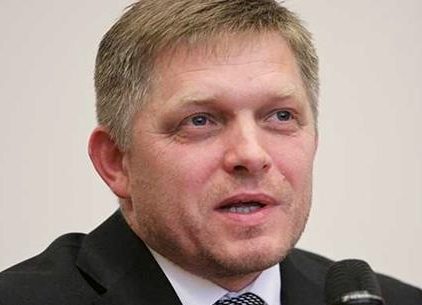 Our Czech correspondent Gemini sends his translation of an
online article that quotes Robert Fico, the prime minister of Slovakia, during his recent appearance on a TV talk show. The translator includes this introductory note:

PM Fico is a former member of the Communist party of Czechoslovakia, and currently a devoted socialist. I guess his fascination with the state and its power is too obvious, even from this article. He surprised everyone, though, with those remarks about Islam.

Prime Minister Fico: We cannot tolerate the arrival of Muslims and the building of mosques!

When it comes to the fight against terrorism, countries ought to be passing laws, enabling them to get private information of dangerous persons. This results from the statements Prime Minister Robert Fico made while taking part on the Saturday talk show called Sobotné dialógy broadcast nationally. The prime minister pointed out that some countries in the world are passing special laws concerning the fight against terrorism which give more leeway to police. “Maybe the world or events would (eventually) press on us to set different rules for some group when it comes to privacy, telephones or bank accounts,” said Fico. He emphasized that it would relate only to an obvious state of national emergency. “If the danger in Europe increases, I thnik that this would be the simplest way to react. I’m not in favour of any torture, though. I opt for the access to information,” the prime minister added. Meanwhile, unless proved guilty, presumption of innocence should apply to everyone, and offices in charge of criminal prosecution should treat everyone equally.

Terrorism relates also to us

Concerning terror attacks in Europe he said that Slovakia cannot act as if this problem is not our concern. Also this is why nowadays dangerous persons are monitored much more carefully. “There are groups, foreigners, but also sometimes maybe even our citizens on our territory that act irrationaly, oddly, acting in a way that suspicions arise that in the future they might do something harmful to the country. In case anything like that happened, we put everything together in order to make Slovakia more prepared,” Fico stated. Nowadays, the Slovak intelligence service focuses much more on effective international cooperation, information exchange mostly.

Fico agrees with Miroslav Lajčák, the Slovak foreign minister, that the project of multiculturalism has failed. He claims that even though every decent person from the world is welcomed to Slovakia, he should, to a certain extent, respect the environment, values and rules, which are dominant in Slovakia. “Given that Slovakia is a country where the Catholic Church dominates, and the second largest is the Lutheran Church, then perhaps we could not easily tolerate that 300 or 400 thousand arriving Muslims would start building mosques and changing the nature, culture and values of the state,” explained Fico.

19 thoughts on “No Mosques in Slovakia!”