The following essay by Ashraf Ramelah was originally published at The Voice of the Copts in a slightly different form. 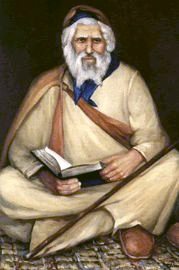 At the end of last month, the Egyptian courts of Alexandria delivered a verdict to ban annual visits to the historic mausoleum of Moroccan Rabbi Yacoub Abu Hasira (Yaakov Abuhatzeira) in the nearby village of Demto. After thirteen years in the court system, the Administrative Court of Alexandria issued a definitive verdict to abolish the annual celebrations of the Rabbi’s birth on the merit of evidence that Jewish visitors “violate public order and morality and use the opportunity to desecrate the land of Egypt.” In response to the verdict, Israelis requested to have the tomb of Abu Hasira transferred to East Jerusalem. Egyptian authorities denied their request.

The Jewish tradition to journey to the Demto Abu Hasira tomb began in 1907. Jews from around the world — in particular, France, Morocco and Tunisia — made the week-long pilgrimage each year to the Demto tomb to celebrate the Rabbi’s birth (December 26 through January 2). The new ruling now forbids this. Until now, Egypt has always allowed foreign Jews (except for Israeli Jews) to visit the Jewish historical landmark, despite the fact that virtually all Jewish-Egyptian citizens have been expelled from Egypt since the Nasser regime — only twenty Jews reside in Egypt today.

Israeli Jews were only allowed visits into Egypt after the signing of the 1979 peace treaty between Israel and Egypt. Special permission was sought from the Sadat government to allow the organizing of celebration tours (pilgrimages) to the Abu Hasira mausoleum and shrine. This current ruling has put an end to these tours.

Who was Yacoub Abu Hasira, and why is his birthday celebrated? His original name was Jacob Ben Massoud, and he was born in 1805 in southern Morocco. The Jewish narrative depicts him as an aged rabbi leaving Morocco by ship on a journey to the Holy Land. During his trip the ship sank, and he clung to a mat (hasira) until he safely reached the shores of Syria. Upon his return from the Holy Land he chose to travel by land. While transiting through Egypt he died, but the miracle of his journey to the Holy Land has been kept alive.

Critically, last month’s court ruling also includes an order for Egypt’s Minister of Antiquities to remove the Rabbi Yacoub Abu Hasira mausoleum from the records of Egyptian Antiquities, where it is officially designated a historic monument. The tomb’s physical conversion into a mausoleum and simultaneous entry into the records of Egyptian Antiquities can only be considered a second miracle in the Abu Hasira story. Egypt, with its climate of relentless racial bias and paranoia against Jews, is more likely to disavow Jewish-Egyptian history than to embrace it.

But the reason for the tomb’s designation has more to do with a political decision made by the ambitious former Egyptian Minister of Culture, Farouk Hosni, in preparing for his bid for the head of UNESCO and the favor he sought for that upcoming election. This occurred shortly before Egyptians and their courts began to stir up the issue of prohibiting visitors to the Abu Hasira tomb. Today, Hosni denies that the tomb conversion and upgrade in 2001 was his doing, citing a committee’s responsibility for it.

However, as Culture Minister, committee decisions came through him, and now his response to distance himself from his efforts to seal Egypt’s Jewish heritage only serves to highlight his bigotry. At the time, advocating for the rabbi’s tomb had been politically useful for Hosni in mitigating the impact of one of his previous ideas, publicly declared, to burn all Hebrew books found on the shelves of Egyptian libraries. He was widely known for this anti-Semitic initiative (never materialized) both inside and outside of Egypt which ultimately deprived him of the UNESCO position.

Grievances from Egyptians concerning the Abu Hasira mausoleum and Jewish celebrants began as early as Sadat’s 1977 visit to Israel as a form of indirect opposition to Sadat’s show of friendliness toward the Jewish state. Years later, during Mubarak’s presidency, a heated debate began in 2001. Poor villagers expressed gratitude for the increase in local business during the week-long visits. Although they claimed the Jews were harmless, and no harm would come to them by allowing the festivities, the opposition expressed the standard complaint that Jews in Egypt were a national security problem.

Brainwashed by mosque indoctrination and the public school system, Egyptians tend to believe that Jews coming to Egypt from Israel are spies for the Israeli government. Townspeople backed by Muslim Brotherhood members in the Egyptian Parliament began a case in the Alexandria courts and won an injunction against the Jewish celebrants. A ruling was issued prohibiting the pilgrimage. But this verdict was appealed and reversed within the same year.

The warfare against Abu Hasira continued. In 2010, Jews around the world were warned by Israeli authorities and the Egyptian embassies that attending the pilgrimage might be dangerous in view of the Muslim Brotherhood’s rise to power and anti-Jewish graffiti smeared on the mausoleum walls. A national television talk show videotaped the Jewish Abu Hasira festivities and saw nothing wrong, but bystanders claimed they saw vicious acts. One witness recalled seeing “slaughtering of pigs in the streets.” A reporter from the Egyptian press described “hysteria and half-naked dancers, unethical behavior.” Chancellor Jaber Qasim, Deputy General of Sufis, ranted that, “the pilgrims are a plot and plan of Zionism to rape the nation by claiming that Jews have roots in Egypt …”

This frenzy — fabrications and hysteria — was the “evidence” used by the courts to decide last month’s verdict — ignorance and prejudice once again leading to the discrimination against minorities. This court ruling now sets a precedent whereby every non-Muslim religious monument, artifact and sacred place in the historic registry becomes vulnerable to the whims of Egypt’s biased courts. In the first place, Egypt’s courts do not have jurisdiction over the status of antiquities or the registry of monuments in the Ministry of Culture where its protection act has the absolute authority. It is not the job of the courts, but rather for panels of experts to decide. Moreover, this case sets a precedent which directly contradicts Egypt’s constitution — Part 1, Article 4 and Chapter 3, Article 47-50, 64 — which declares freedom of religion and respect for all religions. Israeli authorities have now launched a complaint with UNESCO, where the Abu Hasira mausoleum is recorded as a historic Egyptian monument.