PEGIDA has added some things to their statement on Facebook. They ask people not to call for spontaneous rallies themselves but to put candles or flags in the windows. This happened since I sent my translation to you; I had translated the announcement they published earlier tonight. 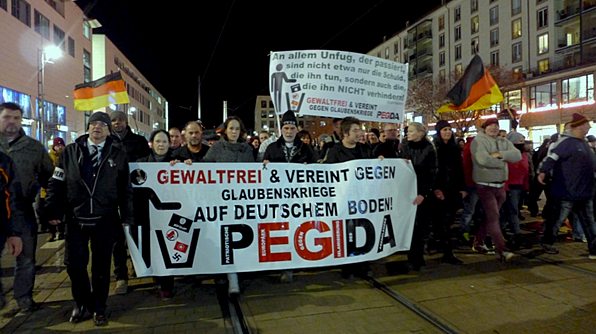 Sign texts from PEGIDA march in Dresden, January 12, as translated by Carpe Diem:

Top: a quote from the German author Erich Kaestner, who fled from the Nazis and remained in Germany during Nazi times, but whose books were burnt: All the mischief that happens is the fault not only of those who commit it, but also of those who do not prevent it.

Bottom: Peaceful and united against religious wars on German soil [the PEGIDA slogan]

Tomorrow night’s march by PEGIDA in Dresden has been cancelled. Below is the translation of the group’s Facebook post. Many thanks to Carpe Diem for the translation:

Unfortunately we have to cancel our 13th meeting for security reasons. The “abstract threat”, according to police technical jargon, has changed into a concrete “death threat” against a member of our organization’s team. His execution has been ordered by IS terrorists. As “collateral damage” had to be expected in such an assault, and we regard it as our special responsibility to guarantee the safety of our protestors, in consultation with State Protection and State Police Headquarters, we are compelled to take this step. It is a serious setback for freedom of speech when it is possible for terrorist forces to erode our guaranteed confessional right, but your safety has priority. We will announce more background information in a press conference on Monday.

(Translator’s note: according to DPA, there have been death threats against PEGIDA founder Lutz Bachmann. They say that there have been warnings by foreign intelligence agencies. All demonstrations are prohibited for next Monday in Dresden by the police because of possible terrorist attacks.)