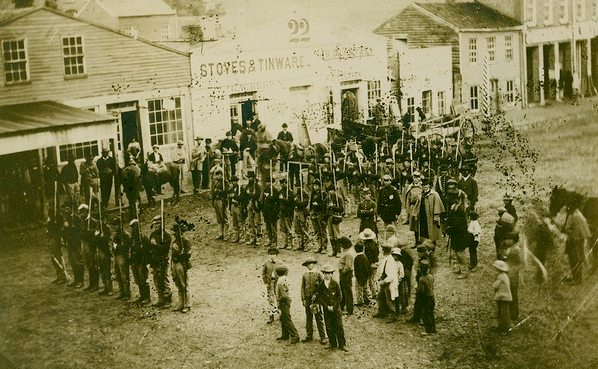 We’re moving into the third day of our quarterly fundraising week, and things are hectic. But they’ve been hectic for a while — for a couple of months, at least, and really hectic for the past two weeks.

I mentioned on Monday that we’ve seen a lot of new readers here since Muslim assassins gunned down staff members at Charlie Hebdo in Paris on January 7. Our traffic more than doubled for a few days, and then gradually subsided. But it’s still at a considerably higher level than normal, which is why I know the crisis is ongoing.

There’s no particular source for this new traffic — the usual links, the same referrers, Google and Yahoo searches, peoples’ bookmarks, etc. I deduce that ordinary citizens have simply become more aware of the Islamic threat, and are looking around on the Web to acquire new information and read opinions on the subject.

Increased traffic may mean it’s easier for us to fundraise, but I’d prefer the situation were otherwise. I’d rather see Islam would just shrivel up and blow away. Wouldn’t it be nice if Gates of Vienna were no longer necessary? I could shut the website down, save the hosting fees, and take up more gainful employment, maybe run a cash register at the Food Lion or greet customers at Walmart.

Imagine there’s no Islam. It’s easy if you try…

Alas, nothing like that will be happening for at least two generations. I’m going to be rolling the stone up this hill for the rest of my time — until senility sets in and the future Baron carts me off to a home, anyway.

And that means we’ll be pounding at our readers for one week every three months, trying to lure enough money into the tip jar to keep going for another quarter.

The theme of this week’s fundraiser is “Friends and Neighbors” — that is, our pals here on the World Wide Web.

I don’t have much time for extracurricular reading. Not only does my eye condition (macular degeneration) limit my time at the screen, but the routine work of Gates of Vienna absorbs so many hours a day that I mostly just read email and skype, and open a few websites when required by circumstances.

I take in a lot of information that way. Fjordman and “the Italians” (Insubria and C. Cantoni) send so many articles or article excerpts every day that I generally stay abreast of all the important news stories that lie within the mission of this website.

However, there are a few other topics that interest me. One of them is the Second Amendment and the III Percent movement.

The right to keep and bear arms isn’t directly related to what we do in the Counterjihad. It’s not like we need to post snipers on all the main roads at the edge of town here in East Boondocks to pick off the mujahideen when they try to sneak in.

However, our ability to defend ourselves here in the USA depends on our constitutional right to arm ourselves. We can look to Europe to see what happens when citizens surrender their God-given right to defend their liberty. When the State decides to side with the immigrant replacement population and repress any dissent, ordinary citizens have nothing but rocks and clubs to use against police wearing helmets and body armor while carrying automatic weapons and wielding fire hoses.

The advantages conferred by firearms are even greater when armed citizens combine in an orderly, trained, and disciplined group — the “well regulated militia” referred to by the Founders in the Second Amendment of the United States Constitution.

The federal behemoth — and especially the current administration — would prefer to disarm Americans and render them as helpless as most Europeans. Unfortunately for the tyrants, taking firearms out of the hands of determined patriots is far harder than keeping them out of the hands of those who have already been disarmed.

That doesn’t stop Eric Holder, the Justice Department, and the alphabet soup of federal law enforcement agencies from trying. Ditto the states — at least the blue ones. But these would-be tyrants keep running into the nasty little problem of ornery, determined Americans who own firearms and know how to use them.

Americans have made massive purchases of guns and ammo since Barack Obama was sworn in as president in 2009. What does that tell you?

There is a concerted effort on the part of the federal government to deny citizens their Second Amendment rights. Some state governments — notably those of Connecticut, Maryland, New York, and Washington — have the same mindset. New laws are repeatedly proposed and passed to nibble away at the edges of citizens’ gun rights.

When I want to keep current on these and related issues, I visit Western Rifle Shooters Association and Sipsey Street Irregulars, normally every day. They cover the relevant topics (and many others) in full detail.

Each site has its own focus. WRSA is more of an aggregator — if there is a trend or topic related to the Second Amendment, you can find the relevant links there, and often entire articles and essays.

Matt Bracken, the author of Enemies Foreign and Domestic, is featured at WRSA. He is one of the most respected Second Amendment writers, and regular GoV readers will have noticed that he sometimes comments here.

WRSA is also valuable for its informative posts on logistics, communications, different types of weaponry, and various other topics relevant to gun owners and shooters’ organizations.

Sipsey Street is the blog operated by Mike Vanderboegh, one of the two people who broke the “Fast and Furious” story and thereby guaranteed that he would live the rest of his life under constant federal scrutiny. He is active in the gun-control resistance movement, most recently in the “I Will Not Comply” campaign in Washington State. Go to his site and scroll through the archives looking for “I-594” posts. The ones I find particularly inspiring are those that have photos and articles about the citizens of Washington State who defied the new law and occupied the gallery of the state legislature while carrying firearms, both open and concealed.

Up until now, no state authority has dared to try to stop these armed patriots from exercising their constitutional rights in the face of illegitimate legislation. The Powers That Be must be aware that the price that they would pay for doing so would be quite high. However, the time may come when they foolishly decide that they must execute the “laws” and disarm their citizens.

That’s when the well regulated militia will swing into action.

Many thanks to all of you. The response has been gratifying.

16 thoughts on “A Well Regulated Militia”