This time last year we reported on the march for solidarity with persecuted Christians, organized by Christian Solidarity International in Vienna. This year’s reprise of the march occurred yesterday, December 10. Henrik Ræder Clausen was on hand, and sends the following report.

A subtitled video will be available later. 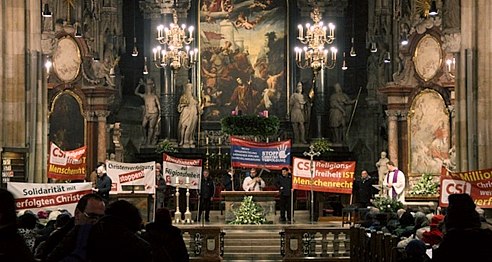 Vienna protests the persecution of Christians
By Henrik Ræder Clausen

On December 10th, the United Nations Human Rights Day, more than twenty Christian organisations in Austria took to the street protesting the sharply increasing persecution of Christians throughout the world. In the morning, a press conference about the situation was organized, and at nightfall there was a torch- and banner-bearing march through the heart of Vienna. The march went from the famous Opera House to the equally famous St. Stephen’s Cathedral, which hosted a prayer mass for the persecuted Christians. 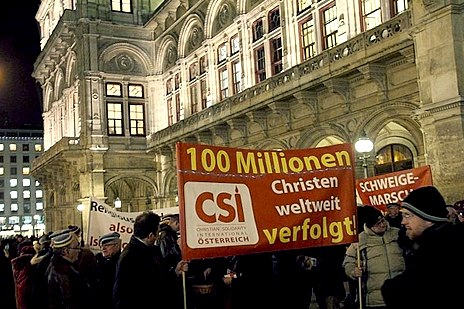 The key organizer Christian Solidarity International (CSI) was the host of the press conference in the morning. Here Dr. Elmar Kuhn (CSI), Kurt Igler (Open Doors), Johann Marte (Pro Oriente), Herbert Rechberger (Kirche in Note) and Martin Kugler (OIDAC) explained the plight of Christians in various countries. For obvious reasons the newly Islamic State and its systematic cleansing of Christians from the Middle East was in focus, but the panelists also discussed the situation in North Korea, as well as other challenging trends for Christians these days. 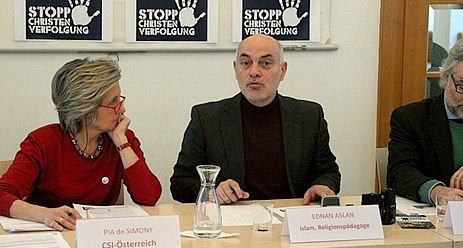 After the interventions about the sufferings of the Christians, CSI expressed their great joy in having a Muslim on the panel, specifically Dr. Ednan Aslan, a well known professor of Turkish origin. Dr. Aslan spoke in great detail about various Islamic topics, and stressed that what Islamic State does in Syria and Iraq is a perfect match with the teachings given by Saudi-sponsored imams and mosques. There is no significant ideological difference between IS and the Saudi interpretation of Islam.

He went on to reject the idea of the Koran as being literally a perfect, divine scripture, and said that the complicated origins of the book in Arabia mean that it contains omissions and mistakes, and that while it is inspired by Allah, it remains the creation of humans. It is precisely this, according to Dr. Aslan, that provides a source of hope: By investing sufficient resources in new Islamic organisations, it is possible that the Koran and the other Islamic scripture (the Bukhari hadith collection was mentioned as an example) can be reinterpreted to fit into modern, liberal societies. But when questioned by the CSI about it, he could give no actual suggestions on how to reinterpret words such as ‘decapitate’, not to mention how to give any such new interpretations of clear and literal words real authority. He was also not able to explain why scripture with such obvious contents should be permitted in religious organisations.

A march with clear messages 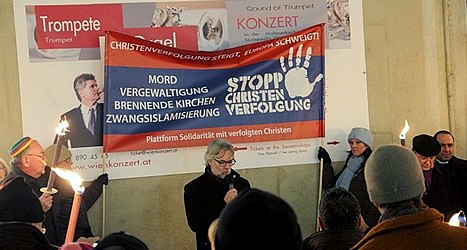 However, the somewhat confusing messages from the press conference were washed away by the evening march from the Opera House to St. Stephen’s Cathedral. More than a thousand participants carried touches and banners through the Christmas-decorated streets of Vienna, with messages such as “Freedom of Religion is a Human Right”, “100 millions Christians suffer persecution”, “Stop the Genocide against Christians”, and not least the leading banner with the text “Murder — Rapes — Burning churches — Forced Islamization”, a clear protest against Islamist behaviour in many countries. The march was led by a priest holding a large crucifix, while Dr. Elmar Kuhn of CSI gave a speech while walking. The Maltese Church, which is located in the middle of the march, was rang its bells in support. 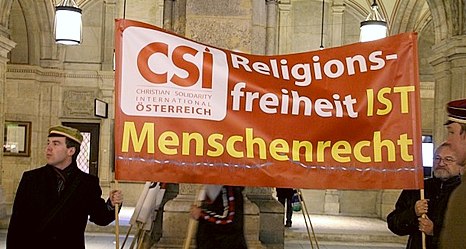 In addition to the usual flyers with information about the situation, the organizers also distributed buttons with the Arabic letter ‘N’. This is the sign that Islamic State and other Islamists paint on the walls of homes and other property belonging to Christians, marking them as targets of attacks, abductions, killing and destruction — a sign now used extensively in the formerly Christian country of Syria. This practice strongly resembles the methods used by German national socialists during the 1930’s to mark up Jewish property. This is a cause of reflection in times where Christians even in the West frequently need police protection due to their conversion from Islam, or due to being too clear and outspoken in their criticism of Islamic ideology. 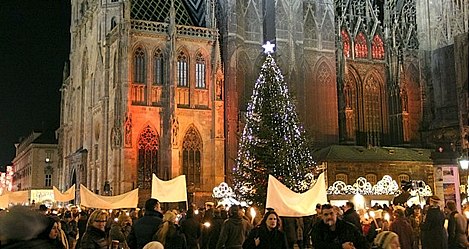 After the sombre march through the streets of Vienna, past Christmas markets and trees, participants entered the Gothic St. Stephen’s Cathedral. All of the banners were carried into the cathedral and displayed prominently there, a powerful gesture of support from the Church of Austria. The ancient cathedral, which opened more than 850 years ago, added a quiet historical perspective to the sufferings that Christians all over the world face even in current times. But for all the protests, there was still a lack of practical proposals for what politicians and others may do to really protect Christians, and to counter the ideologies used to justify the persecutions.

6 thoughts on “Vienna Protests the Persecution of Christians”