Imagine a country where the Prime Minister announces that new elections are needed, just a few months after the previous general elections were held. Then suddenly, the PM changes his mind a couple of weeks later and states that no new elections are needed, after all. Surely, this must be a banana republic? Well, the country in question is Sweden. The Prime Minister’s name is Stefan Löfven, a Social Democrat. Some outside observers may wonder whether Sweden during December 2014 took a major leap towards banana republic status. Or perhaps we should say banana monarchy, since Swedes still have a king.

At the same time, a 15-year-old boy was arrested after an explosion rocked Malmö, Sweden’s third-largest city, on Christmas Eve. The blast was the fourth in the area within a short period. “If you’re 15 years old then you don’t have the know how to make explosives. So we assume he wasn’t alone,” police spokesperson Ewa-Gun Westford told the news agency TT. Residents of the immigrant-dominated area of Rosengård in Malmö, the most Islamic city in Scandinavia, say that living there is a “disaster.” Burning cars, bombs and attacks with hand grenades have become commonplace. People are scared to go outside after dark. Many want to move. 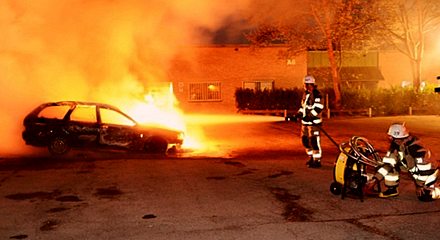 After several bomb attacks in Malmö, the road by the local police station in Davidshall has been sealed off. “It isn’t about a specific threat, rather a general precaution to increase safety,” police spokesperson Stephan Söderholm told local radio. As far away as India, newspaper readers can read about car bombs in Sweden.

On December 27 2014, Sweden’s government announced that it has scrapped plans to hold a snap election in early 2015. Crisis talks were held between Prime Minister Stefan Löfven and the center-right Alliance parties to ensure that a minority government can govern. The so-called “December agreement” is valid until 2022. The Sweden Democrats, who won nearly 13 percent of the vote in the September 2014 elections, triggered a political crisis by voting against the Social Democrat/Green coalition’s budget as a protest against the government’s immigration policies. The new deal implies that no other party will cooperate with the Sweden Democrats. Everybody else treats them and their voters like pariahs, including the mass media.

Mattias Karlsson, the acting party leader of the SD, blasted PM Löfven and the Alliance parties and commented that the Sweden Democrats are now the main opposition party in the country. He called for a vote of no confidence in the current Prime Minister. “He doesn’t deserve to govern Sweden,” Karlsson stated.

In theory, there are eight different parties represented in the Swedish Parliament (Riksdagen). In reality, there are only two parties: The United Front for National Suicide vs. the Sweden Democrats. The other parties may have their differences here and there. However, when it comes to continued mass immigration and dismantling the Swedish nation state, they act like a hydra with seven heads.

Per capita, Sweden currently accepts the highest number of asylum seekers of any European country. When foreigners can read in their newspapers about car bombs in Sweden’s immigrant ghettos, perhaps it would be a good idea to at least slow down the current pace of immigration, if not halt mass immigration completely. The Swedish political establishment will have none of it, however. They want more mass immigration, no matter how little money and how many car bombs, gang rapes or public shoot-outs they have.

With the December agreement, the Swedish ruling establishment have created a kind of political cartel, joined together by a mutual suicide pact. They indicate that they will not cooperate with the Sweden Democrats under any circumstances, even if the SD should get 20-25% of the vote next time.

Whether the other parties will be able to stick to this policy as long as the SD keep growing is uncertain. However, the fact that they are openly trying to stigmatize and isolate a large number of Swedish voters sends out some dangerous signals. A growing number of Swedes now view the Sweden Democrats as the only viable peaceful and democratic alternative to the ongoing destruction of their nation. It is unwise to block the only peaceful alternative still left to frustrated Swedes. Such a move will heighten tensions even further. The polarization of Swedish society will probably continue to grow, and perhaps reach unhealthy levels.

If Sweden decides to commit national suicide, this is deeply regrettable. However, they have no right to drag their neighbors down with them. The Scandinavian and Nordic countries are today members of the Schengen Agreement. I am strongly opposed to this agreement and think all European countries should pull out of it. I have been on the record for years as stating that the European Union (EU) in its present form should be dismantled. Yet the Nordic countries have other agreements that predate any made with the EU.

The Nordic Passport Union dates back to the 1950s. It allows citizens of Denmark, Sweden, Norway, Finland and Iceland to travel and reside in other Nordic countries without a passport or a residence permit. Nordic citizens are to some extent treated like local citizens in other Nordic countries. This arrangement worked well in the past. Most people in Denmark, Norway or Finland will not mind if a few Swedes come to work and settle in their countries. The problem is this: a rapidly increasing number of people carrying a Swedish passport are no longer ethnic Swedes, or even Europeans. The hordes of Arabs, Somalis, Pakistanis and others which Sweden is now foolishly allowing into the country may not always remain in Sweden. If or when the money runs out to finance this heavy economic burden, these immigrants may look for other countries to loot.

Sweden’s suicidal madness has now reached a level where it must be treated as a security threat to neighboring countries. The authorities in Denmark, Norway and Finland should publicly declare that if Sweden maintains its current levels of immigration, other Nordic countries have no choice but to suspend the Nordic Passport Union and reestablish effective national border controls. Unfortunately, Danish, Norwegian and Finnish authorities are probably not ready to do this yet. However, if the situation in Sweden continues to deteriorate, its neighbors will be left with no choice but to protect themselves against Sweden’s self-inflicted problems as best as they can.