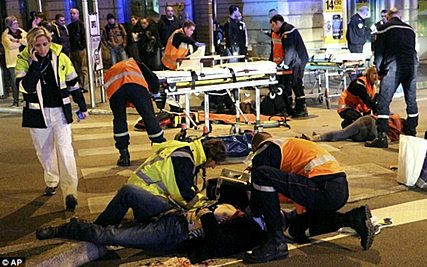 This evening, in the city of Nantes in western France, an unnamed man drove his truck into a crowd of pedestrians at a Christmas market, injuring eleven people.

Regardless of its Mohammed Coefficient, we can all be certain that this tragic incident had nothing to do with Islam.

An extensive report appeared this evening in Ouest-France. Many thanks to mOSXquito for the translated highlights, with interpolated commentary:

Monday evening a light truck plowed in the dense crowd at the Place Royale Christmas market in Nantes.

The police were immediately alerted by around 90 calls.

Eleven people were wounded, five very seriously and one is in critical condition. All the injured are in the CHU (hospital).

NB: I have a earlier version of this page (as a screenshot, attached to this e-mail) that says that several witnesses heard the attacker scream “Allahu Akhbar”.

This has changed on the actual page. They now say that : “some people say that they heard the attacker screaming ”Allahu Akhbar”…

Brigitte Lamy (prosecutor) says that nothing they know shows it was a terror attack (she lies…). Pierre-Henry Brandet (interior ministry spokesman) said that the ”Allahu Akhbar” scream is only a rumor and that nothing links this event to yesterday’s attack in Dijon.

Brigitte Lamy emphasized that this was “an isolated event”.

The attacker, a 40-year-old man from the Charentes maritimes (no name yet…), tried but failed to commit suicide by stabbing himself several times after the attack. He’s in intensive care.

5 thoughts on “Jihad by Truck in Nantes”