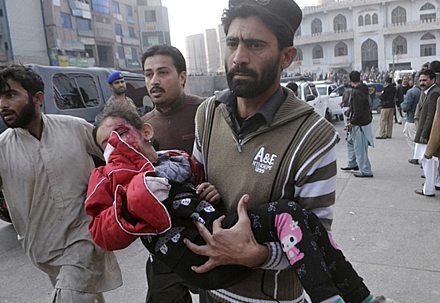 Pakistan has just suffered its version of Beslan: at least 130 people, most of them children, were killed in a jihad attack on a school in Peshawar carried out by a branch of the Taliban.

In the wake of the hostage-taking in Sydney, this horrific event is a reminder that Islamic terror attacks are not mounted solely against non-Muslims, but also target Muslims who are not Islamic enough. Statistically, takfiri-denounced Muslims and/or innocent Islamic bystanders are far more likely than kuffar to be killed by mujahideen.

One reason for the widespread slaughter of Muslims by Muslims is that it is much easier for a jihad group to mount a successful attack in a pest-hole like Pakistan than in a civilized Western country. There is a larger population of potential jihad recruits, the security forces are less sophisticated in their ability to monitor and interdict a terrorist conspiracy, and the government, the army, and the police are more extensively infiltrated by terror-minded zealots who can help a plot succeed.

The incident in Peshawar was billed by the attackers as a retaliation for recent military operations against the Taliban. The fact that the location was an army-run school was considered sufficient justification under sharia to make it a lawful target. The attackers were ordered to “ordered to shoot the older students but not the children”. Evidently ten-year-olds are not considered “children” in northwestern Pakistan, because some of the victims were that young.

One interesting aspect of the story is this quote from a witness: “The attackers had long beards, wore shalwar kameez and spoke Arabic.” Shalwar kameez is the standard form of dress for both men and women in much of Pakistan and also (mostly for men) in parts of Afghanistan, a combination of trousers and long shirt. So were the invading mujahideen Arabs who had adopted the local costume as a disguise? Or have the Taliban taken up speaking Arabic?

Below are excerpts from the report in The Hindustan Times:

At least 130 people, most of them children, were killed on Tuesday when about six Taliban gunmen stormed an army-run school in northwest Pakistan, in one of the bloodiest terror attacks in the country in years.

The bloody Taliban raid on the school in Peshawar ended after almost eight hours, police said, with all six attackers dead.

“The combat operation is over, the security personnel are carrying out clearance operation and hopefully they will clear the building in a while,” police official Abdullah Khan told AFP.

“Dead bodies of six terrorists have been found in the building.”

Senior police official Shafqat Malik confirmed the combat phase of the response had ended, while chief army spokesperson General Asim Bajwa said on Twitter that the operation was “closing up”.

Bajwa said explosive devices planted in school buildings by the militants were slowing clearance efforts. Special forces soldiers had rescued more than a dozen staff and students, he added.

The attack that also left more than 120 injured began around 11.30am (India time) after the group of militants entered the Army Public School when about 500 students and teachers were believed to be inside.

A student who managed to escape the carnage said, “An army doctor was teaching us about first aid when attackers came from behind our school and started firing.”

“Our teachers locked the door and we ducked on the floor, but they broke down the door. Initially they fired in the air and later started killing the students, but left the hall suddenly. The attackers had long beards, wore shalwar kameez and spoke Arabic.”

Another student who survived the attack said soldiers came to the rescue during a lull in the firing. “When we were coming out of the class we saw bodies of our friends lying in the corridors. They were bleeding. Some were shot three times, some four times.”

The hard-line Tehreek-e-Taliban Pakistan (TTP), fighting to topple the government and set up a strict Islamic state, claimed responsibility for the attack as retaliation for a major military offensive in pro-Taliban tribal strongholds of Khyber-Pakhtunkhwa.

TTP spokesperson Muhammad Khorasani told AFP the six attackers “include target killers and suicide attackers”. “They have been ordered to shoot the older students but not the children.”

“It’s a revenge attack for the army offensive in North Waziristan,” he said, referring to the anti-Taliban military offensive that began in June.

“We selected the army school for the attack because the government is targeting our families and females,” said Khorasani. “We want them to feel the pain.”

More than 1,600 militants have been killed since the launch of Zarb-e-Azb in June, according to data compiled by AFP from regular military statements.

A hospital, where the dead and wounded were rushed to after the attack on the school, said most of the victims were aged between 10 and 20.

It was not clear whether the children were killed by gunmen, suicide bombs or in the ensuing battle with Pakistani security forces trying to gain control of the building.

Irshadah Bibi, 40, whose 12-year-old son was among the dead, beat her face in grief, throwing herself against an ambulance. “What is the sin of my child and all these children?”

The school on Peshawar’s Warsak Road is for children of military personnel and civilians. Army wives often teach in them.

Mudassar Abbas, a physics laboratory assistant at the school, said some students were celebrating at a party when the attack began.

“I saw six or seven people walking class-to-class and opening fire on children,” he said. One student said soldiers came to the rescue them during a lull in the firing.

“When we were coming out of the class we saw dead bodies of our friends lying in the corridors. They were bleeding. Some were shot three times, some four times,” the student said.

“The men entered the rooms one by one and started indiscriminate firing at the staff and students. Several students escaped through the back gate. One of students who escaped told Dunya TV that fourth period was in progress when they heard firing.

“First we didn’t know what has happened. But later an army officer told us to escape through back gate,” he said.