A prominent “German” mujahid is no more. To paraphrase Monty Python, he has rung down the curtain and joined the choir invisible.

The name of the late jihad fighter was Reda Seyam. At the time of his death in Mosul on December 6 he was known as Dhul Qaranain, and served as the “education minister” for the Islamic State.

Rembrandt Clancy has translated an article about Mr. Seyam by Michael Stürzenberger, and has subtitled an accompanying video showing the mujahid in all his glory back in 2012, roughing up a Spiegel cameraman. 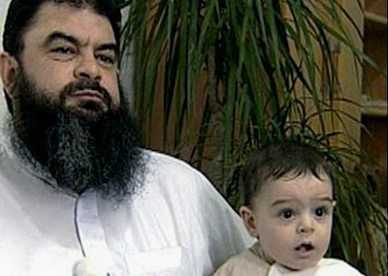 In Berlin, Reda Seyam was a very diligent Mohammedan: As welfare recipient he sired one child after another (after all, the unbelievers paid out plenty of booty for them); and on top of that, he then named one of the children “Jihad”, or “holy war” (photo above). As well, the completely idiotic Berlin Superior Court awarded him the right to do it. Wonderful, so he is allowed quite officially to raise fighters who will later be obliged to wage war against us and subjugate us. But Reda Seyam will no longer bring Jihadists into the world, for now he has ridden off to the 72 virgins.

In Berlin Seyam had palmed €2,000 for his six children from the kafir-city, inclusive of social welfare and Hartz IV. When the lawsuit over giving the child the first name of “Jihad” was in progress, he brazenly lied that he had “nothing to do” with Osama bin Laden and al Qaida (where have we heard that maxim before?). At the same time he was considered to be a close confidant of the terrorist prince and was also supposed to have been deeply embroiled in the Bali attacks which took the lives of 202 people. In a consistent manner he then attacked a Spiegel TV film crew who wanted to film him; and while beating up on them, he demolished their camera, giving rise to damages in the amount of several thousand euros.

In 2013 the peace religionist moved to the Islamic State and made a career as “Minister of Education”, in which capacity he was the highest-ranking German there. According to FOCUS, he immediately provided Islamically correct directives for the un-“education” of the unfortunate IS children.

“Documents available to the Research Co-operative prove that Dhul Qaranain [his battle name] had given directives to the IS controlled University of Mosul in Iraq as well as to schools controlled by the Islamic state. For example, he prohibited music, art, geography and social studies instruction.”

Unfortunately, his promising Islamic career came to an end precipitously on 6 December, on St. Nicholas’ Day no less. Was Knecht Ruprecht [Servant Ruprecht, companion of St. Nicholas] underway then?

“According to an Iraqi Internet news portal, one Dhul Qaranain, whom the NDR, WDR and SZ identified as Reda Seyam, is supposed to have been killed in fighting on the weekend of the 6th and 7th of December south of the Iraqi city of Mosul. In the meantime, the Iraqi government also confirmed the death of the “Minister of Education”, Dhul Qaranain.”

What a loss, for he culturally enriched us to no end over the past years.

“Reda Seyam had a decades-long career as a Jihadist behind him. In the early 1990s, the native Egyptian frequented the so-called Multicultural House in Neu-Ulm [Bavaria]. The Islamic centre, which was closed in 2005 by the Bavarian authorities, achieved international recognition as a meeting place for terrorists.

“Among the visitors to the centre were Mohammed Atta, the assassin of 11 September 2001, and Said Bahaji, chief logistics expert of the 9/11 attacks. Other prominent terrorist suspects who frequented the centre in Neu-Ulm were Mamdouh Mahmud Salim, who functioned temporarily as Osama bin Laden’s finance chief and is said to share responsibility for the attacks on the US embassies in Nairobi and Dar es Salaam, which resulted in hundreds of deaths. In addition, there was Fritz Gelowicz, member of the so-called Sauerland cell, which planned a bombing attack on US soldiers in Germany. […]

“[Dennis] Cuspert* and Reda Seyam had also participated in the Salafist demonstration in Bonn in May of 2012 during which 29 policemen were injured. Shortly thereafter Seyam migrated to the country of his birth, Egypt, which at that time was under Islamic rule. Later, according to security services, he is supposed to have resided in the Turkish district of Reyhanli. In August of 2013 the ARD Magazine, ‘Report Mainz’, reported that Seyam was in Syria.”

[* Translator’s note: Dennis Cuspert, with whom Reda Seyam maintained close contact, was known as “Gangsta Rapper”, then under the name of Deso Dogg. He fought in Syria for the IS under the name of Abu Talha al Alkmani. Source: Online Focus]

It is good to know, however, how tolerant our security services were, so that he was able to perform his religious obligations in this country undisturbed. But now once and for all the hope has been lost that this valuable “specialist” will be in a position to enrich us again in the future. For sure, the Chairman of the Evangelical Church [Heinrich Bedford-Strohm] will now be plunged into deep mourning*; for a poor, unfortunate follower of the Islamic State bought it. The Interior Minister Maiziere is probably taking it hard as well, that “a son of our country” has been lost. Such a wailing! But from among the 230,000 expected asylum fraudsters seekers in the next year we certainly may be welcoming one or another recruit as a qualified jihad “specialist”.

* [in deep mourning:This link points to another article on Politically Incorrect by Michael Stürzenberger. It includes a photo of the former Bavarian Lutheran State-Bishop, Heinrich Bedford-Strohm, now president of the entire evangelical church in Germany, in “cosy togetherness” with Imam Idriz, who is a prominent figure behind the Qatar-financed Grand Mosque project in Munich (ZIE-M). Mr. Stürzenberger also refers to the Rheinsischen Post which quotes the bishop as saying: ‘We also have to love the IS-fighters”.]