This is the second in an occasional series of essays. Part 1 is here. 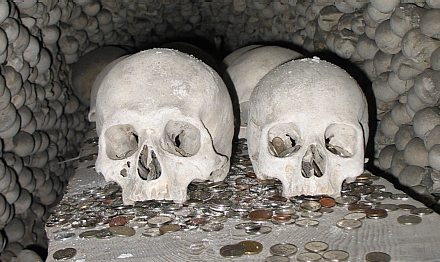 The Duty to Know

The first post in this series examined the way in which the West repeatedly attempts to obscure uncomfortable facts about Islamic violence by avoiding the use of Islamic names in media accounts and official references that deal with converts to Islam. This is just one way that non-Muslims delude themselves about the nature of Islam. Their efforts are deliberate — that is, for reasons that are difficult to understand, Westerners prefer to construct an edifice of comforting falsehoods about Islam rather than face up to the ghastly truth.

On Friday November 14, an “ecumenical” Islamic prayer service was held at the National Cathedral in Washington D.C. under the auspices of the Episcopal Church of the United States. Anyone who wants to understand the ongoing aggressive Islamization of the West should be interested in what was really going on in the cathedral. To the Episcopalian hierarchy and other Modern Multicultural Christians, the event was an opportunity for interfaith outreach, cultural understanding, the building of bridges, the elimination of stereotypes, etc. blah yak — yes, I know; we’ve heard it all before.

That’s how the infidels understood it. The parts they could understand, that is — much of the service was chanted in Arabic, and even the English-language parts were somewhat obscure, as verses translated from the Koran tend to be. The occasion was a sort of Rorschach test for post-modern progressives, allowing them to hear what they wanted to hear. 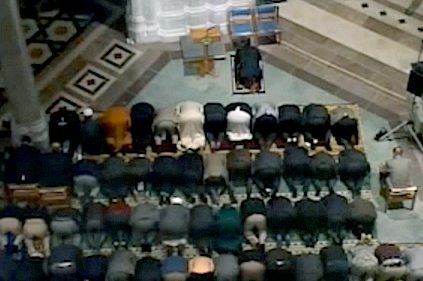 But what significance did those prayers have for Muslims?

Some eighty percent of the world’s Muslims do not understand Arabic, so many participants may have had to rely on the English portions of the service, just as we did. But all of those who had been trained in Islamic law — and there was at least one Al-Azhar scholar in the congregation, based on his headgear — would have understood the Koranic background to the chosen prayers, because those verses have been the subject of extensive commentary (tafsir) for more than a thousand years.

For example, one of the chanted verses was Koran 1:7: “The path of those upon whom You have bestowed favor, not of those who have evoked [Your] anger or of those who are astray.”

As Dr. Andrew Bostom pointed out, “those who have gone astray” are Christians, and “those who have evoked [Allah’s] anger” are the Jews. Such is the universally recognized meaning of the passage, as glossed by a consensus of Islamic scholars.

That is: prominent imams came to the National Cathedral and chanted a prayer that specifically anathematized their Christian hosts.

That’s some ecumenism, that Islamic ecumenism.

If Christian luminaries were faithful shepherds of their flocks, they would make it their business to be aware of such basic facts about Islam. They have a duty to know, but they have failed to perform that duty.

The same may be said of our political and military leaders: they have a duty to know, but they have not been dutiful.

The abandonment of professional standards

In the following summary I have once again drawn extensively on the invaluable research and analysis performed by Major (retd.) Stephen Coughlin, one of the foremost American experts on Islamic law.

Concerning Islamic terrorism, decision-makers at the highest levels of the American government have outsourced the definition of the enemy to agents or affiliates of the Muslim Brotherhood. This was true before 9-11, and the process has only accelerated in the years since. This negligence by our public officials constitutes one of the greatest betrayals in American history.

Civilian leaders, defense analysts, and military commanders have been explicitly enjoined from describing the ideological inspiration for jihad fighters in any terms except those approved by Muslim advisers who have been strategically placed in influential positions at the highest levels of the government and the Pentagon and among top legislative aides on Capitol Hill.

More than five years ago the words “Islam”, “Muslim”, and “jihad” were removed from all training materials used by federal law enforcement agencies and the U.S. military when describing the perpetrators of terrorist acts. The word “terrorism” itself was eventually excised, leaving us with “violent extremism” as the only acceptable phrase to identify what used to be called terror attacks. “Extreme” is obviously only a modifier, and requires some sort substantive to modify, but asking “extreme what?” has never elicited a coherent response.

These restrictions have left government employees and serving members of the military with no way to describe or analyze the ideology that motivates our “extremist” enemies. Any analyst who wants to gain an understanding of what drives an “extremist” to commit “workplace violence” is unable to acquire the tools to do so. He may conduct extramural research in order to delve into jihadist ideology and Islamic law, but his “racist” activities, if discovered, may put an end to his career.

Muslim Brotherhood operatives have racked up an impressive series of successes over the past twenty-five years of their infiltration. The Ikhwan, as most readers will recall, described their mission in the United States as a “civilization-jihadist process”[1]:

The Ikhwan must understand that their work in America is a kind of grand Jihad in eliminating and destroying the Western civilization from within and “sabotaging” its miserable house by their hands and the hands of the believers so that it is eliminated and God’s religion is made victorious over all other religions.

How could our leaders willingly outsource their knowledge of an enemy to agents of that same enemy? Theirs is a non-outsourceable assignment. They have taken a specific oath that requires them to know such information.

The failure to know constitutes a breach of their oath of office. Consider this excerpt from tort law as it applies to a standard of conduct that produces negligence:[2]

Knowledge has been defined as belief in the existence of a fact, which coincides with the truth. It rests upon perception of the actor’s surroundings, memory of what has gone before, and a power to correlate the two with previous experience.

He may, furthermore, be engaged in activity, or stand in a relation to others, which imposes upon him an obligation [duty] to investigate and find out, so that the person becomes liable not so much for being ignorant as for remaining ignorant; and this obligation [duty] may require a person to know at least enough to conduct an intelligent inquiry as to what he does not know.

An official cannot know everything. That is where the concept of due diligence applies: he has a constitutional duty to know or undertake a reasonable inquiry into who the enemy is. It is not through being ignorant, but through remaining ignorant, that negligence arises.

This is the minimum standard for all public officials. Does it seem like an excessive requirement? Is the bar set too high for our most senior leaders to jump?

Ignorance of these matters is evidence of organizational incompetence. The shutting down from on high of inquiry into the facts about jihad is evidence of the top-down subversion of the chain of command. It goes beyond mere negligence. To put it bluntly, our own leaders have betrayed us. In their incompetence they have willfully violated their oath of office.

Unfortunately, there is no longer any institution that is capable of holding these oath-breakers to account. All of them — the Pentagon, the Justice Department, Congress, the courts, the state legislatures — have been compromised. Meaningful enforcement has ceased to be a realistic option. The caretakers of these institutions may continue their treason indefinitely, without hindrance.

Thus the system will likely continue on its self-destructive course until complete Islamization causes it to collapse of its own weight. In the meantime, ordinary citizens must exercise their own duty to know. They must educate themselves about Islam, jihad, and sharia.

The information is available. None of it is hidden. All that is lacking is a widespread urge to understand it.

23 thoughts on “The Whited Sepulchre, Part 2”