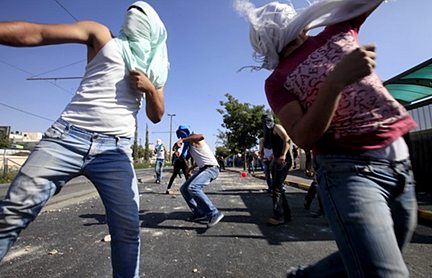 “The Road to Happiness” According to Federica Mogherini

Messianism of the new age: The road to universal happiness lies in the creation of the Palestinian State

Right after taking office, Federica Mogherini, the new EU foreign minister, said she “would be happy if by the end of my term, a Palestinian state existed”. Her words exactly — “would be happy”.

The solution of acute and painful conflict in Ukraine, the destruction of the ISIS, anarchy in Libya, hundreds of thousands of African migrants rushing to Italy (home of Mogherini, by the way), massacre in Syria, the exodus of Christians from Middle East, the stabilization of Lebanon, standing on the brink of chaos — all these are secondary. Her dream is the creation of a Palestinian state. She arrived to Jerusalem and Ramallah only a couple of days after entering the office to demonstrate her stance on the issue.

Mogherini knows that it is a chronic, local, 50-year-old conflict that in reality doesn’t have any impact on the situation in the region, and definitely in the world. She is aware of Kerry’s desperate efforts. Kerry was so confident that Palestine is a winning ticket, a pass to the cherished post-apocalyptic era. He even visited the Holy Land almost every week while forgetting about everything else. Despite all his efforts he suffered a complete fiasco.

Perhaps Mogherini has to consider the pressure from the outside? From the Arabs, for instance? In such a case it would be understandable, however; such conduct can be cowardly and have a sense of ominous associations with Munich. But this is not case. The Arab countries — Saudi Arabia, UAE, Egypt and Kuwait — nowadays do not even care about Israel. They need to survive, to resist Iran and “jihadists”. The last thing they want is another Hamastan at their borders.

Could it be American pressure? Perhaps. But this situation is unbeneficial for the Europeans. They will have to pay while USA gets all the dividends.

So what is behind Mogherini’s passionate desire and dream? It is neither politics nor interests. It’s the “pursuit of happiness”. It is the irrational religious ideology similar to those of Communist and Nazi. It is the messianic faith that it is possible to radically improve the world by overcoming the main obstacle on the road to happiness. And this obstacle is the “Palestinian problem”.

The messianic ideology of our time is known as Postmodernism, and as every religion, it has own dogmas of faith. They are the following:

Dogma I: Political Correctness. Explanation: White racism and chauvinism, or the Third World is always right

We know about “White savagery” and “White ferocity”*. We know that history of the white race has been an endless spiral of unspeakable horror** and the great European classics of recent centuries are “Dead White European Males” (DWEM).

There is only White racism. There are no such concepts as Black racism and Colored racism.

It is very “moral” to rob and humiliate the South African Boers, even to publicly sing the song “shoot the Boer with machine guns”, as South African President Zuma did. It is very decent to forcibly take away the land from whites as Mugabe has done. No one is interested in all that. Nor the fact that black and colored racism are directed against no other than … black and colored people, too.

In Congo, Pygmies are used as “pets.” In Mauritania the whole population is divided into castes: “White Berbers” — slaveholders, “Black Berbers” — the lower classes and Negros — slaves, who comprise about 600,000 people (about 20% of the population). Girls are married off at the age of 8 to 10 years.

In Zimbabwe, people of the Ndebele tribe suffer from discrimination much more so than whites in Mugabe’s hierarchical system.

In many Third World countries, the fate of women fate is to be sex slaves. Gays, lesbians and transsexuals are persecuted. They are doomed to beatings, stoning, to the most severe humiliations and mockery.

In Pakistan, according to Koranic laws (Hadd), a non-Muslim may testify in court only if the victim is also a non-Muslim. The testimony of women (Muslim or non-Muslim) is not admissible.

All this is irrelevant to the Political Correctness Dogma.

Dogma II: Multiculturalism. The idea of religion is a medieval relic, obscurantism and fanaticism only in regards to Judaism and Christianity

All other religions — Islam, paganism, voodoo, etc — are positive by definition because they are part of national traditions and cultural diversity. Pogroms of Copts by Salafis with the connivance of the Muslim Brotherhood in Egypt during Mohamed Morsi’s rule; the death penalty for converting to Christianity in Iran, Pakistan and Bangladesh; persecutions of the Ahmadiyya Muslim Community in Pakistan; the burning of Orthodox churches in Kosovo; the bullying of Zoroastrians and Baha’is in Iran; the killing of Mandaeans-Gnostics in Iraq by Islamists — these do not bother anyone.

Churches are forbidden in Saudi Arabia. Buddhist shrines are destroyed in Malaysia. All these are considered normal. It’s definitely not religious fanaticism — it is a part of cultural diversity.

Dogma III: “No” to the National State as long as we speak about the national state in the West only

No one demands it from Third World countries. Nobody requests the monarchies of Persian Gulf countries to grant equal rights to labor migrants from South-East Asia and Africa, who exist like semi-slaves within the sponsorship system. Qatar is a truly multicultural state: out of two million people only 300,000 are locals. The other 1,700,000 people have no rights.

No one insists that Bhutan stop discrimination against the Lhotshampa population, one-fifth of country’s entire population. Nobody brings up the issue of minorities’ rights — of the Hindi and the Chinese — in Malaysia.

Dogma IV: Islamophobia. Initially it was part of the Political Correctness Dogma, but it later became a particular area of sacred knowledge

Currently Muslims are the “Proletariat” of the 21st century, the vanguard of the oppressed population and the progressive class. They are victims of European oppression; “Noble savages” that stand up against the greedy and mercantile West. Edward Said is the Icon of the enlightened world.

“Islamophobes” are distinguished by their relationship to Edward Said. Mentioning the Muslim crimes and wretchedness in history and in our time — the status of “dhimmi”, doubtful Surahs in the Quran, call for the Caliphate, the legitimacy of slavery, pedophilia, female circumcision, etc. — is utterly prohibited.

Dogma V: Conflicts must be resolved immediately and permanently

Philosophers of the Enlightenment believed that by freeing people from the shackles of oppression and giving them wealth, one can stop wars, conflicts and miseries. This was unattainable, and history has proved it repeatedly. Such an illusion was justifiable three hundred years ago, but not today.

The Palestinians are the embodiment of all these Dogmas of faith. They are the personification of anti-colonialism, the virginal purity and righteousness of the Third World. They struggle with the “religious fanaticism” of Jews, who allow themselves to refer to Biblical texts and prophecies. They oppose Zionism — the idea of Jewish nationhood. Their future state is sacred, even if it becomes “Judenrein” and eventually leads to the elimination of Israel. The mere fact that the Palestinians are Muslims grants them holiness, righteousness and virtue. Finally, it is indeed one of the most long-lasting conflicts. The forever longed-for Palestinian state would solve all other conflicts, would provide universal peace, harmony and the triumph of the religion called “post-modernism”.

The road to hell is paved with good intentions.

5 thoughts on “The Messianic Ideology of Our Time”