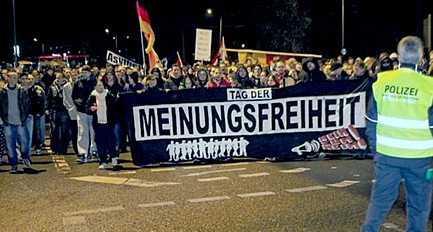 The following article from Kopp Online gives an account of a recent citizens’ demonstration against a refugee center in Berlin. According to some first-hand accounts, not only were leftist counter-demonstrators allowed (and encouraged) to attack the demonstrators, they were even provided with tactical intelligence by police units on the scene.

Berlin and the Spark to Civil War:

In the German capital city Berlin, a protest demonstration by residents against the building of refugee accommodations was attacked by left extremists. This escalated to the point that the previously peaceful participants skipped a step and turned directly into enraged citizens in popular anger mode. The impetus: women and children injured by stones and bottles from counter-demonstrators. The amateur descriptions of that leave little room for positive prognoses in this district.

Also, the Berlin “Civilian Movement of Marzahn” was founded to resist the building of a refugee accommodation in the form of a “container village,” one of such now arising in many parts of Germany because of the continuing stream of refugees. The residents here, as almost everywhere in Germany, feel overlooked by the political system and fear a negative development in their homeland.

Berlin can, unfortunately, show a number of examples, such as whole lengths of street, or parks degenerating to lawless space and becoming nearly unlivable, because of Green policy failures. For example, the region around the still occupied Gerhart Hauptmann school impressively models the continuing tug-of-war for space. And we may also mention at this point the “Great Kreuzberg Experiment in Devastation” — Görlitzer Park.

Needless to say, with this citizen movement, too, extreme groups are trying to infiltrate it and use it for their own political purposes. And the mainstream Left seizes upon that to brand this movement purely a protest by xenophobic rightists.

Since the one-sided reportage of the left-leaning MSM on the recent demonstrations by movements like PEGIDA (Patriotic Europeans against the Islamization of the West) in Dresden or the HoGeSa (Hooligans against Salafists) in Cologne and Hannover, we know that unadulterated Nazi parades look different. In this day and age, it is wise to inform yourself from a variety of sources. The internet is very useful for that.

A report was published on Facebook by participants in the Berlin demonstration — which unfortunately became violent — a report that, should it prove to be true, could have impact:

Toward 2:00 PM, according to police estimates, 800 citizens gathered at the meeting point on Raoul Wallenberg Street. That number seems small compared to the expected number of participants. However, our estimate is that ca. 1,000 residents did not come, scared off by the massive police presence and the attacks that were planned against participants.

We will not go into great detail, but will keep things short, factual and faithful to the truth. At no point did the police want us to move even a meter. After the success of the Monday demonstrations had been positively received by the public, there was apparently a desire to “make an example” and inhibit the political reaction to a failed policy of asylum. The reason for this suspicion is the completely blocked and fenced-off area around the entry point. According to some estimates, there were about 1,700 police present, who knew they were not capable of moving out blockades of 100 to 200 persons on a street that was 40 meters wide. The “Hamburg fences” were facing inwards, not — as assumed — to close off the counter protest, but so that the state could knowingly hinder and prevent our properly announced demonstration.

For periods of up to two hours at a time, the leaders of the demonstration received no information on what was going to happen and what the planning was. Only when we emphasized that we had announced a time frame until 11:59 PM and wanted to guarantee a safe departure for participants, by getting to the S-Bahn station, did it dawn on Mr. Rogge (Unit Leader) that now something must be done and we would at least have to go a couple of hundred meters on Raoul Wallenberg Street toward the station. Visibly nervous, he tried to use confused tactics to fool the counter-demonstration. While the officers needed 30 to 40 minutes to coordinate their people, our well-organized group was ready to go in a minute. The police intended to divert the counter-demonstrators and then move past them. Our leaders agreed, because there was no other option. And here is where the police SNAFU began.

They then allowed the Antifa to approach the tracks. This was followed by bottles and stones as well as firecrackers being thrown at our peaceful demonstrators. THE POLICE DID NOT INTERCEDE! The demo leader received numerous reports of people being injured. This was of interest to no one! A fourteen-year-old girl was hit in the face by a rock or bottle. This is not made up, it is the TRUTH!

The government is using LEFTIST EXTREMISTS as a WEAPON against its own PEOPLE!

In other descriptions and various emendations, further serious accusations are made against politicians and police. For instance, only minutes after discussing an evasive route with demonstration leaders, the police leadership is said to have passed the information to the counter-demonstrators. This accusation is supported in a Facebook entry.

There is no confirmation of wounded women and children from official sources. The police report states matter-of-factly how the violence came about.

When groups of leftists picked up stones from the area of the streetcar tracks and had to be stopped by officers, these persons attacked the police. The officers were bombarded with cherry bombs, so they had to employ pepper spray and batons to prevent further attacks. After the demonstrators moved out, they were accompanied by up to 100 counter demonstrators. Firecrackers, stones and bottles were thrown out of this group of partly masked counter-demonstrators at those who were withdrawing. Some of the demonstrators likewise threw stones at the counter-demonstrators. The situation settled down only after use of force by officers, and the column of demonstrators reached the station on Raoul Wallenberg Street. A total of 22 police officers were injured, of which three were unable to continue for the day.

The MSM are simply celebrating the latest successful blockade of a gathering of neo-Nazis. Similar murmurings are to be heard among the established parties, politicians and diverse unions. Little of it useful for constructing a value-neutral assessment.

The fact is that there is hate bubbling on all sides — too much hate!

It is easy to find in the countless discussions in various social networks or on YouTube. The many amateur videos on this demonstration do not bode well for the future in these districts.

The follow-on demonstrations in various cities are already planned or announced. Failed policy in many areas is bearing its fruit.