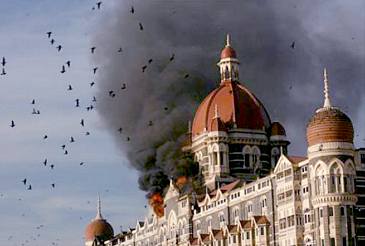 Today is the sixth anniversary of the beginning of the terrorist attacks that paralyzed Mumbai for three days and killed more than 160 people. So it’s interesting to see the following report pop up in The Daily Mail:

Police are taking to railway stations to tell passengers what to do in the event of a Mumbai-style terrorist attack at one of Britain’s busy terminals.

After government warnings that the threat to Britain from Islamist fanatics is ‘greater than ever’, officers handed out leaflets telling the public to ‘run, hide and tell’ if they are caught up in an attack.

How can this be? After all, Prime Minister David Cameron reassured the British public just a few weeks ago that

Islam is a religion observed peacefully and devoutly by over 1 billion people. It is a source of spiritual guidance which daily inspires millions to countless acts of kindness.

We know Mr. Cameron is an acknowledged expert on the Islamic faith. So Britons have nothing to fear from “terrorism”.

21 thoughts on “Mumbai on the Thames”