JLH has translated another op-ed by Oliver Jeges from Die Welt: 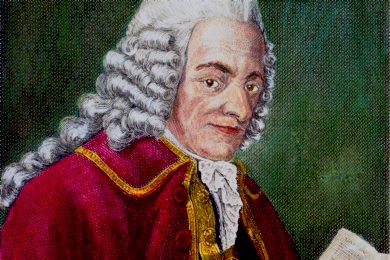 [Picture caption: “Definitely an ‘Islamophobe’: The French Enlightenment philosopher Voltaire had criticism and ridicule for Islam — but also for other religions.”]

Islamophobia? We Call It Enlightenment

It is not so-called Islamophobia that is the problem, but sentences such as “That has nothing to do with Islam.” Considering what is now happening in the name of this religion. concern is justified.

There is a good side and a bad side to all things. A wiener schnitzel tastes delicious, but is bad for the figure. With the invention of the internet, humanity gained unlimited access to both information and cat videos. Unfortunately, it also included trolls and cyber-mobbing. Social networks are good for spreading fashion and food blogs, as well as political propaganda.

Religion is no exception. Both good and bad things are done in the name of God. Just think of the Bible, which commands love of neighbor, but tolerates slavery. It is no different in the Vatican. One pope had an arrangement with the Nazis, another promoted the collapse of communism. There are two sides to every coin, whether its name is Pius XII or John Paul II.

There is and has been terrorism in some form in nearly all religions. There was Christian terrorism at the time of the Crusades, and there was Jewish terrorism by the underground organization, Irgun, at the time of the founding of the Israeli state. Believe it or not, there is Buddhist terrorism against the Islamic minority in Myanmar and Hindu terrorism, for instance the mass killing of Muslims in the Indian Gujarat in 2002. But, if you believe its apologists, there is only one religion with no such aspect: Islam.

Some time ago, I was a guest on Sandra Maischberger’s program. The subject was “Fear of holy warriors — Is this Islam threatening us too?” Seated next to me was Khola Maryam Hübsch, a German Muslim and prominent author. On the couch opposite sat Aiman Mazyek, chair of the Central Council of Muslims. It was only a few minutes before the use of one of the most popular rhetorical feats of legerdemain in the Islam debate. Khola Hübsch said: “When I look at ISIS, it is a fanatical ideology which has absolutely nothing to do with Islam.”

It is true that Aiman Mazyek forbore in this appearance his standard comment, always ready for any ordinary occasion and every international situation: “That has nothing to do with Islam.” But like a typical representative of Islam, he denied responsibility. Questioned about the radicalization of young people and whether it was not the duty of the respective communities to prevent the drift of youth toward fundamentalism, he replied that that was the task of the security services and the police, wriggling out of the subject almost effortlessly.

In her turn, the moderator Kristiane Becker, too — a convert to Islam as well as an apostate from MTV — used her third sentence to clarify: “What IS is doing has absolutely nothing to do with Islam.” It makes you wonder why Muslim women attend these talk shows, if all that has nothing to do with their religion.

“That has nothing to do with Islam.” What a convenient shield. This distancing reflex is what makes any sensible discourse about the dangers of Islam impossible. Instead, anyone who criticizes the conservative and radical excesses of Islam is characterized as suffering from a severe form of “Islamophobia.”

If, daily somewhere in the world, a passenger plane should crash, people would be justifiably afraid of flying. The fact that most fliers land safely would really assuage no one. When you were up over the clouds, fear of crashing would be a constant companion. An airplane a day! There would be the concern that it could happen anywhere and anytime. But that is just a mind game.

It is exactly the same with Islam. Nobody can say when or where it will strike next. Only a few weeks ago, we thought that countries like Australia and Canada were safe from Islamic terrorism. Until we learned better. In the meantime, every European city has witnessed its own Salafist scene.

Is it really impossible to criticize these things without each time incriminating the peaceful majority of Muslims? We don’t have to compliment airlines for being able to keep their jumbo jets in the air. Nor do we have to compliment Muslims for obeying the law. It is to be expected.

Modern society must, without limit, allow ideas and ideologies to be judged as bad and to be criticized. Communism or capitalism, vegetarianism or feminism, Christianity or Islam. For hundreds of years, our ancestors went through proverbial hell so that we could enjoy this right of free expression. And now we should revise it? Because Muslims feel insulted?

If you consider that the only true and legitimate criticism comes from those who are permanently branded as “Islamophobes,” it makes you want to be an “Islamophobe” too. If profound critics like the political scientist Hamed Abdel-Samed, the sociologist Necla Kelek, the politician Ayaan Hirsi Ali, and the neuroscientist Sam Harris are all supposed to be “Islamophobic”, as they are accused, then Voltaire, Bertrand Russell and Sigmund Freud were all “Christophobic”.

Every Feminist Should Be “Islamophobic”

If Ayatollah Khomeini once called uncovered women “Islamophobic” (zed-e eslam, Persian: against Islam), then, as enlightened humanists in the here-and-now, we must also be. Indeed, every feminist, every critic of totalitarianism and every anti-fascist should be. Every human rights advocate and peacenik, too.

Saying: Good Islam means peace, and there is no bad Islam — this exposes the representatives of and experts on Islam as impostors and deceivers. So long as the Islamic world is indecisive, ambiguous and hesitant about radical tendencies, so long as they will not admit that this is a pan-Islamic problem, that is how long we can mix up Islam and Islamism. Or, to paraphrase Aiman Mazyek: All that has nothing to do with Islamophobia. We call it Enlightenment!

16 thoughts on “Islamophobia? We Call It Enlightenment”