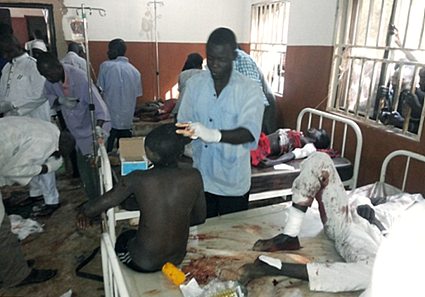 Early this morning a suicide bomber killed upwards of fifty people and wounded dozens more at a school in northeastern Nigeria. The bomb was in a backpack carried by a mujahid who had disguised himself as a student and entered the school assembly. No one has yet claimed responsibility for the attack, but Boko Haram is the obvious suspect. The jihad group is active in that part of Nigeria, and its name means “Infidel education is forbidden”.

If this technique — using fake schoolboys to blow up school gatherings — were to move beyond Nigeria, especially if it were to spread to the West, how would it affect standard educational procedures? Would schools and auditoriums become like airports? Would children have to take off their shoes and be x-rayed before they entered every event?

Below are excerpts from the CNN report (video at link):

Kano, Nigeria (CNN) — At least 47 people were killed and 79 were wounded Monday by a suicide bombing outside a school in northern Nigeria, police said.

The attacker was disguised as a student when he set off the explosion in a government boarding school in the town of Potiskum, police spokesman Emmanuel Ojukwu said.

“We suspect Boko Haram is behind the attack,” Ojukwu said.

The explosion took place at 7:50 a.m. local time outside the principal’s office, where students had gathered for a daily speech.

“We were waiting for our teachers to come and address us at the assembly ground when we heard a huge explosion,” student Adamu Ibrahim said.

It was not immediately clear how many of the casualties were students.

Although no one‎ has claimed responsibility for the attack, Boko Haram is the prime suspect.

Read more at The Sydney Morning Herald. More video at the BBC. More photos at The Daily Mail.