Sergei Bourachaga returns with an open letter he wrote to academics and journalists in Canada after the jihad attack in Ottawa last month.

A caveat: I have serious reservations about the use of “hate laws” to achieve any political ends, even those of the Counterjihad. Not only do such laws criminalize people on the basis of their thoughts, they also tend to be used selectively by Western governments against “right-wing extremists” in order to stifle domestic dissent.

However, I recognize that many people outside the United States, including a substantial number of Canadians, have different ideas about the wisdom of curbing our civil liberties. Thus I offer Mr. Bourachaga’s opinions here, but they do not necessarily coincide with the views of this blog’s owners.

After the tragic events that unfolded in Ottawa at the end of October 2014, I waged a massive campaign to reach the maximum number of Canadian journalists and academics to convince them that we cannot win the ideological war orchestrated by ISIS on the World Wide Web if we focus on online propaganda to radicalize Canadian Muslims, while disregarding the fact that many Canadians who died on the battlefields of Iraq and Syria were radicalized by Muslim Clerics in Mosques well known to the Canadian Intelligence community. Thus the need to silence those radical clerics under the “Hate Laws” of this country.

Two days ago a prominent Muslim thinker wrote an article supporting a position that I have been trying to convey since 2007: Islamic radicalism starts at the level of many mosques, where Muslims exposed to the venoms of hatred, promoted in the name of complying with the will of Allah, decide to betray Canada. Often their anger is unleashed on innocent victims, who are targeted simply because a cleric has designated them as infidels.

I sent the following text to more than one hundred Canadian journalists and academics, and hopefully with the new voice from the Canadian Muslim community in Toronto, politicians and law enforcement agencies will give our “Hate Laws” an additional momentum. 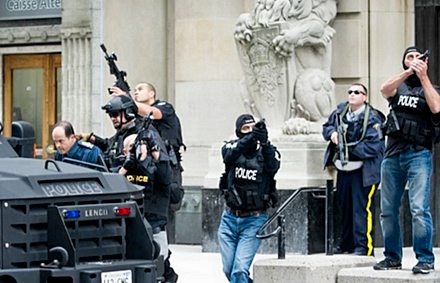 It is safe to assume that, like most Canadians, you followed very closely the violent events that shook the city of Ottawa at the end of October, and forced politicians, law enforcement agencies, academics, and anti-terrorism experts to ask again and again the following two questions: “How does a Canadian-born individual who seems to be well-adjusted to the Canadian way of life (democratic secularism) betray his country, and sink deeper and deeper into the abyss of religious fanaticism and kill innocent people he considers the enemies of his GOD/ALLAH? What can we do to stop or contain this radicalism, or to deradicalise those who have been victimized by extremist preachers?

Following the tragic events that claimed the life of Cpl. Nathan Cirillo, RCMP Supt. Martine Fontain pointed out to the media that “…it’s not a crime in Canada to have radical thoughts.” I respectfully disagree with her statement, especially if the radical thoughts carry venoms of hatred directed against well-identified groups who are dehumanized, demonized, and selected indiscriminately to perish in the fires of hell to reinforce the message that our government should stay away from the upheavals of the Middle East.

Below this text you will find an article I wrote back in 2007, published on several websites in a variety of modified forms, advocating the use of existing “Hate Laws” (Section 319.(1) Criminal Code) in Canada to reinforce the message that Canadian authorities will not tolerate the spread of hate messages, even if the radicals promoting them wave the false flags of freedom of religious worship, or freedom of expression.

I strongly believe that journalists and academics should encourage decision makers at the Federal and Provincial level, to use existing hate laws to silence religiously-motivated hatred exploited by local and visiting preachers as a tool to radicalize and recruit Canadian youngsters, and propel them into acts of violence (locally and in foreign lands such as Syria and Iraq), all in the name of establishing the reign of Allah on this planet.

Lately, prominent members of Canadian Islamic groups and associations have joined me in highlighting the need to use “Hate Laws” to silence radical clerics preaching hatred in their mosques. One such courageous figure is Mr. Tarek Fatah who published on November 26, 2014, and article entitled “The myth of ‘de-radicalization’ of Islamic radicals”, and pointed out that the struggle against Islamic radicalism in Canada will not be successful unless the following measures are adopted:

And finally I recommended that immigration from Pakistan, Somalia, Iran, Iraq and Syria must be suspended until Canada can be assured that security documents, identity papers and university degrees cannot be bought on the black market or from state agencies.

For previous posts by the author, see the Sergei Bourachaga Archives.

One thought on “An Open Letter to Canadian Journalists and Academics”