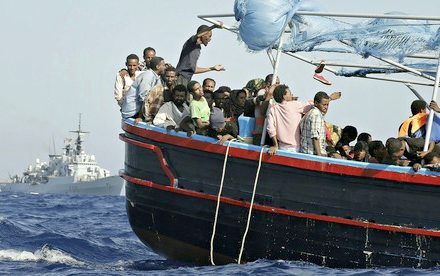 The following open letter was published today at Riposte Laique. Many thanks to C.B. Sashenka for the translation, which originally appeared at Vlad Tepes:

300 Italian physicians : African immigrants are the Trojan Horse of Ebola

An Open Letter of 300 Lombardi physicians to the Minister of Health:

As you know, the Ebola disease is currently spreading in certain African countries where, as the UN stated, the situation is totally out of control. This means that the epidemiological data relating to the geographical dissemination of the virus, the number of infected people, and the number of deaths are not credible and are probably underestimated.

You said that it’s not necessary to be alarmed, that we doctors should neither worry nor spread panic among our patients, even if, according to WHO (World Health Organization), it is “the most grave and serious health emergency of modern times.”

You have the duty to be preoccupied with it, and to put in place all possible measures to protect the health of the population.

The measures you have taken are the same as those put in place in other European countries, that is, to notify airport personnel to isolate any suspected cases. But the isolation of infected people can only be effective from the very beginning, that is, before these people come into contact with other individuals.

Patient Zero (American Thomas Eric Duncan in Dallas, Texas), and most recently Craig Spencer (American doctor in NYC) of the USA, were perfectly fine at the time of their arrival in the U.S., and were able to walk around peacefully for several days before the onset of fever, thereby infecting other people. This shows us that the steps taken do not guarantee the early identification of infected people in countries not equipped to perform checks at ports and airports.

Italy has, as additional and exclusive risk factors compared to other countries, a massive and continuous surge of migrants arriving from Africa; and each arrival poses the risk of being a Trojan horse that could spark a tragedy.

Probably nothing will occur from all this, but we can’t say with certainty that a tragedy won’t occur, unless this problem has been completely fabricated.

The only effective measure is to quarantine anyone arriving from an area at risk, as is the case with the states of New York, New Jersey and Illinois, and with the soldiers of the American base in Vicenza.

The arrival of thousands of Africans coming to our shores is not often known, and it only takes one infected person for the rest of the people on the same boat to become infected — even if the sick one is thrown into the sea, or even if, at boarding, all seem perfectly healthy, because the incubation can be more than 20 days.

Caution dictates that everyone be under observation for an adequate period of time. But a deadly mix of political demagoguery and irresponsibility practically impedes this solution; and some of the newcomers either disappear or are dispersed throughout various cities within the country, in areas with dense populations where a possible spread of the virus can be much easier and faster than in isolated areas.

Imagine what could happen in Italy (not now but in two months, for example), if Ebola cases were reported at the same time when the flu epidemic rages: if there are millions of people with fever, with congested airways, with gastrointestinal problems, symptoms that cannot be distinguished from the first symptom of Ebola fever, then how can differentiate between the flu and Ebola? Will doctors be able to leave all the patients together in the same waiting-room with the risk of the Ebola-infected people contaminating everyone, or will they have to do home-visits dressed like astronauts?

Will you, Mr. Minister, provide adequate protection to all Italian health care providers, or will you send them to the frontlines with a simple painting mask?

What will happen in the emergency centers?

Will all patients with suspicious symptoms (hundreds of thousands of people) be sent to the Sacco Hospital in Milan and the Spallanzani Hospital in Rome?

How many beds will be available at these specialized centers?

We must remind you that that even in specialized centers, 50% of infected patients die, and it will not be possible to hide the problem as is currently being done with tuberculosis: here we will see corpses on the roadside, and the responsible one for this tragedy will certainly not be the poor devil vector agent of the virus, but will be the one who gave the virus a license to kill by allowing it to circulate freely on our roads instead of quarantining it, as science and common sense dictate.

(Letter undersigned by 300 other physicians of Lombardy)

8 thoughts on “African Immigrants: The Trojan Horse of Ebola”