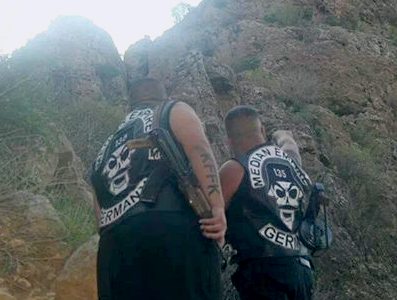 Recent news articles from Syria report that members of biker gangs from several European countries have joined the battle against the Islamic State in the besieged Kurdish city of Kobani. JLH has translated two pieces on the topic from the German tabloid Bild.

Bikers Use Shock Photos to Recruit for the Battle Against ISIS

Cologne: Bizarre but true: Ethnic Kurdish Cologne bikers from the club Median Empire are banding together and fighting against the murderous ISIS terrorists in Syria.

On Friday Kawan A., the boss of the club, posted a shocking photo. It shows what is apparently a female Kurdish peshmerga fighter who had been beheaded by ISIS terrorists. The comment written by another member of the club reads: “ One lovely rose after another is being uprooted from the garden of Kurdistan. Humanity, and above all we Kurds, will never forgive this, you animals!”

Kawan himself was traveling recently in the crisis area. According to his lawyer, Gabor Subai, he was in one of the refugee camps on the Turkey-Syria border, where he organized and passed out aid packages for Kurds who had been driven from their homes.

At home, they earn their money from extortion and prostitution. Now bikers from Germany are supporting the Kurds in their battle against IS in Syria, and thereby sending a signal to the area.

Median Empire is best known for skirmishes in the region, and now and then a threat directed at the Hell’s Angels. So far no real biker war. Some members of the gang are finding their field of battle elsewhere. Wearing their typical cowls, they have apparently gone to war against IS in Syria. They are allegedly supporting the Kurds fighting there.

The leader of the gang, Kawan A., posted several pictures on his Facebook page which show individual bikers in action. One photo shows two broad-shouldered men in the mountains in denim vests, weapons on their shoulders. “Our boys were here in Kobani and reported to me they had been fired on,” is the caption. The Kurds are also getting help from members of the Dutch biker gang No Surrender.

Why are the bikers from Germany joining the fight against IS? That has to do with how things have developed here. “In recent year, immigrants — including Muslims with extreme tendencies — have gained more influence,” says Erich Rettinghaus, a police union representative from North Rhine-Westphalia, to Süddeutsche.de.They are considered to be especially brutal.

The “Kanaken” [sardonic use of a pejorative term for foreigner, like “wog” or “wop”], as they call themselves, rose through the ranks in gangs such as Hell’s Angels or Bandidos. Others founded their own groups. Kawan A. built up Median Empire in 2011, and its members are predominantly Kurds. Kawan A. was previously a PKK activist. He went to a refugee camp in Iraq as early as April. He does not say whether he took part in the fighting.

Rettinghaus says there may be various reasons why the bikers went to Syria. For one thing, they may be persuaded by the cause. For another, it may be a message back home. “The pictures send a strong message,” says the police representative. These young fellows want to show how tough they are. “When they return, they will expect everyone to stand at attention.”

The bikers are not necessarily going to be held criminally responsible for possible engagement in Syria or Iraq. The German Ministry of the Interior, when asked, says that traveling to Iraq or Syria is not criminal. Criminal liability depends on what specifically can be proven against a person.

Then too, there is no German law according to which anyone can be prosecuted for joining a foreign fighting organization — that depends on whether the organization is considered to be a terrorist one. Fighting for IS or the Kurdish Workers Party, PKK, is criminal, but fighting for the Kurdish peshmerga is not.

There is no danger that whole biker gangs will be taking off for Syria. Rettinghaus refers to the cowl-wearers’ interest as “individual instances.” Biker gangs, he says, are all about business. “There is no money to be made in Syria or Iraq.” Many biker gangs here do that with the drug trade, prostitution or extortion.

3 thoughts on “The Waffen-Bikers of Syria”