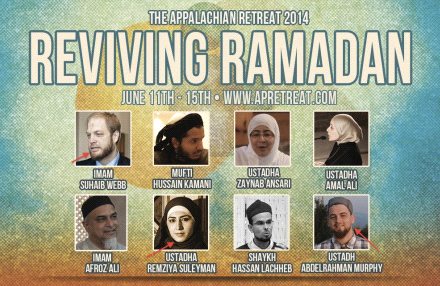 Remziya Suleyman, Director of the Muslim American Center for Outreach (ACO) along with her colleagues Suhaib Webb and Abdelrahman Murphy, schooled the young Muslims during the 2013 “In the Footsteps of the Prophet” retreat and again this year.

“You carry the legacy of the greatest man that ever graced this earth. This ummah (global Muslim community) depends on what you, the next generation, does. Remember that.”

Observing Ramadan is one of Islam’s five pillars. The youth retreats are organized and offered by the Knoxville Muslim Community. Read more about them here and here.

Just like Hassan al-Banna, the founder of the Muslim Brotherhood, Suleyman, Webb and Murphy are working to keep Muslim youth tethered to Islam, its ideology, and a sharia-adherent lifestyle. Because Islam is a “complete way of life,” it includes the pro-CAIR-Hamas type of political activism that these three advocate to their student audiences.

Hassan al-Banna founded the Muslim Brotherhood as a religious, social and political movement intended to revive the Islamic Caliphate and rule it according to sharia law. As stated in the Brotherhood’s by-laws:

“Insist to liberate the Islamic nation from the yoke of foreign rule… the need to work on establishing the Islamic State… the sincere support for a global cooperation in accordance with the provisions of the Islamic Sharia.”

Al-Banna said, “It is the nature of Islam to dominate, not to be dominated, to impose its laws on all nations and to extend its power to the entire planet.” The co-founder of CAIR, Omar Ahmed said, “Islam isn’t in America to be equal to any other faith, but to become dominant. The Koran, the Muslim book of scripture, should be the highest authority in America, and Islam the only accepted religion on Earth.”

CAIR is tied to Hamas and Hamas is the jihadi arm of the Muslim Brotherhood, as was proven in the Holy Land Foundation prosecution.

Do they tell the kids about their work with CAIR? Do they tell them who and what CAIR really is and what it is organized to do? Or do they offer the same propaganda that the public hears about CAIR being an organization that stands up for the civil rights of Muslims in the U.S.?

Dawud Walid speaks about the FBI with disdain and somewhat casually about the al-Qaeda affiliate group al-Shabaab. Recently, the U.S. Embassy in Ethiopia issued a warning of an anticipated attack by al-Shabaab directed to areas “where large numbers of U.S. and Western citizens congregate.”

In Knoxville, Suleyman closely collaborates with Imam Abdulrahman Murphy, who worked as an intern for CAIR-Chicago. He later spent time training in Saudi Arabia, a country that strictly follows sharia law. Murphy is on the faculty at the Annoor Academy Islamic school in Knoxville that teaches its students negative stereotypes about Christians and Jews. Murphy also works with the UT Knoxville Muslim Students Association (MSA). The MSA was the Muslim Brotherhood’s first established U.S. organization.

Murphy was a speaker at ISNA’s 2013 conference in Dallas. ISNA (Islamic Society of North America), is also a Muslim Brotherhood organization.

In addition to the MSA, Murphy and Suhaib Webb indoctrinate Muslim youth through the Knoxville Roots program. Murphy and Webb also teach at the Ella Collins Institute at the Islamic Society of Boston Cultural Center (ISBCC).

Webb, a convert to Islam, was sent by the Muslim American Society (another Muslim Brotherhood organization), to Al-Azhar University in Cairo to complete his Islamic training. He was then hired as the Imam for the Society of Boston Cultural Center (ISBCC) in Roxbury, a mosque managed by MAS-Boston. This mosque is the sister campus of the Islamic Society of Boston (ISB) mosque attended by the Boston marathon bombers.

It turns out Webb’s associations included al-Qaeda operative Anwar al-Awlaki, and the mosque attended by the Oklahoma Islamist who beheaded his co-worker. Webb is also vocal about his Jew-hatred, anti-Israel pro-BDS (Boycott, Divestment and Sanctions) support.

Guilt by association? Suleyman, Murphy and Webb freely seek each other out and collaborate in their advocacy. Their voluntary association suggests something more like a fully informed joint venture.

Suleyman, Murphy and Webb are recognized in their communities as Islamist leaders. In the case of all three, there is no question that their actions and their words carry the Muslim Brotherhood agenda forward.