This is the first part of a three-part guest-essay by a new contributor, Thucydides. 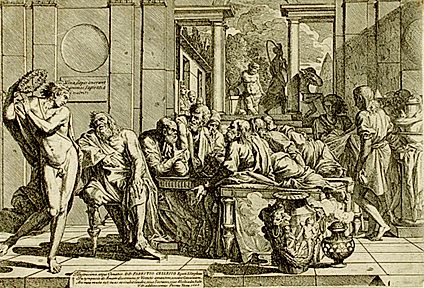 South Yorkshire’s police and Rotherham’s Children Services failed to address massive child sexual grooming and abuse by Pakistani men over a 16 year period in the UK town of Rotherham. The town’s failure is only the most recent and most conspicuous example of faithlessness in the West, but it is not the only example. There are many Rotherhams yet to be exposed. At some level, by inviting a tidal wave of Muslim immigration into Europe, the governing parties of the UK and the EU apparat are proving themselves faithless.

Faithlessness is nothing new. It was common in the ancient world. In Greek mythology, betrayal is the animating principle behind many of the myths and legends. In Classical Greece, Ephialtes’ betrayal of the Spartans at Thermopylae is not exceptional. But no one embodies it more charmingly and transparently than Alcibiades, whose nature led him to be faithless first to Athens, then to Sparta, finally to the Persians.

Nor is it unique to the West. In India, Mir Jafar in 1757 made a deal with Robert Clive of the British East India Company to turn over his Bengali army at the battle of Plassey.

Disappointment, grievance, resentment, and revenge often played a role in these historical examples. In almost all of them, however, complex though the motivations might be, what is clear is that the prime motivation was personal ambition and self-aggrandizement. Nor would many of the faithless have needed to disguise their motives, especially if personal gain were the animating principle. Had anyone asked Alcibiades why he was faithless, he would have been amused rather than offended, certain that his inquisitor was naïve, both about the ways of the world and in the assumption that someone as gifted and remarkable as Alcibiades should be circumscribed by the banal moral conventions that governed the behavior of others.

What is new is not the self-interested faithlessness, but the layers and layers of psychological self-deception designed to hide it.

What is new is the ideological buttressing, the almost gnostic-like belief in their privileged esoteric insight, the need to disguise the narcissism and self-interest, the idealistic justifications.

As a result, the usual means for arousing remorse and penitent conversion will rarely work with those infected with contemporary self-interested faithlessness. In the ancient world, one needed confidence, courage, steely nerves, and an abundance of will and ambition to be faithless — at least to be so famously faithless that we today are aware of it. Today, one can be a nonentity, smaller in moral stature than a dwarf is in physical stature, and be faithless. Witness Rotherham. All one needs today is to know that one is encased in the impenetrable armor of the groupthink defenses described above, and to be faithful to its politically correct faithlessness.

It is no accident, then, that the reported fears of being called “racist” by members of the South Yorkshire police and Rotherham Children’s Services reported in the faithless media invariably fail to address the question, “by whom?” Somehow the identity of those who were guilty not merely of such naming and shaming, and ultimately of more consequential punishments, is left to hang in the air. Does anyone seriously believe that public servants who could allow such sexual abuse to go unchecked for 16 years, despite ample evidence, cared
one fig whether the public they were charged to serve thought them “racist”? Not at all. All those public servants cared about was maintaining cohesion and discipline within the groupthink armory, for the core value of the armory is not public service, but allegiance to the armory and to its ruling ideology — that is, to whether one is on board the “program” and loyal to the group, not with whether one is faithful to one’s public charge and implied oath. Moreover, humiliating ways are found to insure one toes the line — witness the Rotherham researcher who in 2002 was forced to undergo ‘diversity” training and nearly sacked for pointing out that the groomers were “Asian.”

Studies have shown that these small, humiliating punishments are more effective than draconian punishments, because to succumb to great terror is not humiliating, and leads to what Czelaw Milosz in The Captive Mind called, “Ketman,” the art of saying “yes” publicly when inwardly one remains committed to “no.” But capitulating to small, humiliating punishments is so devastating to one’s self-esteem, that rather than confront one’s weakness and cowardice, one often “converts.” One comes to love Big Brother. Nothing explains so well the still surprising support some people exhibit for massive immigration, even in Malmö, Sweden, where immigrant rape of Swedish women is so common that Malmö has been called “the rape capital of Europe.”

Public servants know at a deep level that protection lies in remaining a “team member”. They also know that to operate outside the ideological parameters of the armory is to court danger. They know that the armory will provide them with the ideological cover they need and will exonerate them from the actual consequences of their savage failures. This is why, throughout the entire public sector in the UK from the heads of government to the lowest bureaucratic servant, indeed throughout the EU apparat, “bad faith” is thick and impenetrable among the apparatchiks, and punishment for failure and for betraying one’s implied oath is so rare. Sadly, in the UK, the conscientiousness of the British public servant makes such faithless behavior more widespread and relentless than it might be in a more cynical country with lax enforcement, such as Italy.

As I describe the dynamic above, one must surely wonder how public servants can hide the recognition of their cowardice and faithlessness from themselves. How can they live with themselves? Why they do not, in a fit of contrition, plead for forgiveness from the children and parents whose lives they have ruined? But, of course, the answer lies in the system’s relentless spiritual ruination of its citizens, something widespread in the old communist Soviet Union, as Aleksandr Solzhenitsyn again and again made so apparent.

Of course, at some level they cannot hide the truth. This is why they work so hard not only to suppress awareness, but to redefine their primary fidelity, so that faithlessness appears no longer to be faithlessness but fidelity to a higher, nobler ideal. By this means, their ultimate fidelity is no longer to those they are supposed to serve — to the children being sexually abused, to their distraught parents, to the larger society that suffers demoralization and the moral despair that inevitably follow witnessing such prolonged faithlessness from public servants charged with protecting them.

This old, traditional fidelity is replaced by fidelity to the group to which they belong, by loyalty to its “program”, by faithfulness to a higher ideal — one far more important than the mere sexual degradation of an untold number of underage girls scarcely more than children. What replaces it is faithfulness to the group’s anti-racist intentions, to avoiding the eruption of the “racism” that would follow from disclosure. Thus, in the name of the otherworldly ideal of preventing something far worse than a mere young girl’s being drugged and gang-raped — namely “anti-racism” — they had to, absolutely had to, turn a blind eye to what was going on. As, Fyodor Dostoevsky made clear, God save us from these lovers of humanity in the abstract.

By gazing on abstractions and rendering the concrete individual invisible, shame and self-loathing are replaced by self-congratulation. And by proving one is a loyal member of the “team” and fully supportive of the “program,” one not only wins the plaudits of one’s superiors, one can expect excellent performance reviews. All the while in some flat a drugged 12-year-old girl is being sexually abused by a dozen men.

This “deconstruction” of one’s primary oath of office at all levels of government, e.g., the South Yorkshire police, the Rotherham Children’s Services, the UK educational establishment, the British Labour Party, the EU apparat, etc., and its replacement by the construction of a narrower group allegiance, say to the bureaucracy, or to one’s political party — rationalized, of course, by that group’s seeming allegiance to higher, more ethereal ideals like “anti-racism,” “multiculturalism,” preventing an “ultra-rightwing takeover,” a united Europe, etc. — is so thoroughly entrenched in Europe, and increasingly in the U.S., that it will over time so completely corrupt and degrade society and its servants. Ultimately, by means of that degradation, it will over time come to fill members of the society with such shame and revulsion they will unconsciously long for its destruction.

What is going on is massive psychic warfare designed to deconstruct old virtues and loyalties and to replace them with new ones — in essence, to turn faithlessness into a higher faith. Unfortunately, only one side seems to know what they are doing, and it’s not the side committed to protecting the children of Rotherham.

Next: The Incoherence of the Multicultural Paradigm

39 thoughts on “The Delights of Faithlessness, Part 1”