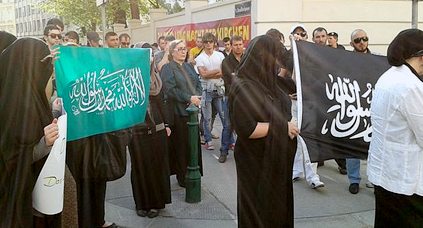 The following op-ed about the ubiquity of Salafism and support for the Islamic State, in Europe as well as in the Middle East, was originally published in Wina magazine. Many thanks to JLH for the translation:

The Caliphate Next Door

Everyone is presently watching the “Islamic State” in the Near East. But there are hundreds of like-minded Islamic towns all over Europe. Terror is among us; it has just not revealed itself.

For months now in Germany and Austria, we have been hearing about a subject that we thought had been all talked out: Islam. Not a day passes between Hamburg and Vienna, Istanbul and London, Stockholm and Cairo, without some Muslim flipping out because his pride, his honor or his feelings have been in injured. And since the turn of the millennium, terrorism in the name of Islam has become as routine in the news as the weather report. The usual car-bomb in Baghdad, Islamabad or Abuja, the traditional assassination attempt in Syria or Gaza, no longer capture anyone’s attention. Such events have become too “normal.” You could say, it’s just a cultural peculiarity among Orientals.

Everywhere there is Islam, there is Islamism. They are Siamese twins. One cannot survive without the other because they have grown together.

The Takbir, or Allah’s Index Finger as the symbol of an entire youth movement… No problem if you feel good as a “teenie terror.” A milieu without context is releasing these teenagers into an uncertain future.

IS — the Islamic State — had to show up so that the subject of Islam would become prominent in the media again. The caliphate proclaimed by Abu Bakr al-Baghdadi, its leader, gives a new twist to the reportage. How brutal and insouciant Islam’s evil face is! IS adherents stone adulterous women, crucify “infidel” Christians, dispossess minority Yazidis from Iraq and outlaw any influence which they believe is not compatible with the pure teaching of the Koran.

And for the first time we notice that this is no mere regional hot spot in the Near East. IS is recruiting its fighters from all over the world. More than 2,000 of them are from Europe, including Germans, British, Austrians, Dutch. Even an Australian Muslim with his underage children joined the jihad. It is true that the the caliphate is “only” raging through Syria and Iraq. But the ideology that makes these terrible actions possible has already found its way here.

There is a Salafist Presence in Almost Every European City

There are people who interpret the Koran literally and reject Western values such as the separation of church and state, democracy, freedom of speech, gender equality, sexual self-determination and international law. In Germany’s Wuppertal, there is a sharia patrol after the British model. Young men patrol nightly to enforce Muslim moral order. If there is a too casually dressed Muslim female, a young Turk with a bottle of beer in his hand, a Egyptian-German standing in front of a gambling hall, the watchmen are on the spot. London has had these morality police for at least two years. Young Muslims — converts included — discipline anyone who does not follow the rules of Islamic law. This form of intimidation is the rule, and the European rule of law undertakes little against it.

Meanwhile, Salafism Has Become a Kind of Pop Culture

The psychologist Ahmad Mansour even speaks of a “youth movement.” The violence-prone and backward interpretation of Islam no longer appeals only to teenagers from desolate immigrant families, but also to “hip kids” who are pining for a little adventure in their humdrum everyday lives. They are named Mehmet, Ali, Sharif and Rashid as well as Florian, Thomas and Andreas. These are disoriented youth, who are looking for simple solutions in a complex world — where Islam offers an acceptable answer to every vital question. However, not all of them end up with Salafism, the conservative Islamic movement which takes Mohammed’s life as its model. Not all of them grow a full beard, learn Koranic suras by heart and wear Turkish trousers and crocheted caps. No, most of them carry on completely normally with their lives. But, all too often, they are happy to sympathize with terrorist groups like the Islamic State, Al-Qaida or Boko Haram. Young people today watch IS propaganda videos the way the pubescent in the 1980s watched the Rambo films. And unlike Rambo, these are spreading a dangerous ideology: Only those who believe in Allah are worthy of life. All others must die. The path to paradise is attractive for unstable young people. The Takbir — or Allah’s index finger, which the IS fighters have taken as their symbol — has also become a familiar symbol among Muslim youth in Austria and Germany.

If you momentarily ignore the familiar street names and the Western architecture, you could imagine you were had wandered into a theocratic state. For instance, in Duisburg-Marxloh, Berlin-Neukölln or Dinslaken-Lohberg. Districts chock full of ticking time bombs. Many young people from there have already departed for the jihad in Syria. Some will die there; some will return. When the emigrants return to Germany and Austria, their minds will be full of hate for infidels. That is what they will have learned in the caliphate.

The Islamic State in the Near East and the violence-prone Muslims in Europe behave like connecting conduits. German and Austrian Salafists go to jihad in the Levant, to come close to Allah on the field of battle. Representatives of IS send out complementary calls for the murder of civilians in Europe and America. The fact that it hasn’t blown up here yet, we owe to the excellent work of intelligence services, which have stayed cool and constantly monitored the situation.

Wherever there is Islam, there is Islamism. They are Siamese twins. One without the other is incapable of survival, because they have grown together. When twins must be operated on, one of them often dies for the health of the other. We can only hope that the Islamic world is capable of overcoming Islamism for the sake of Islam. It would also be healing for Europe.

OLIVER JEGES, born 1982 in Vienna, is an Austrian journalist and author. He studied political science, philosophy and history in Vienna and has lived in Berlin since 2009. He writes for, among others, the Berliner Morgenpost, Cicero, Liberal, taz, Der Standard and Jüdisches Echo.

4 thoughts on “The Caliphate Next Door”