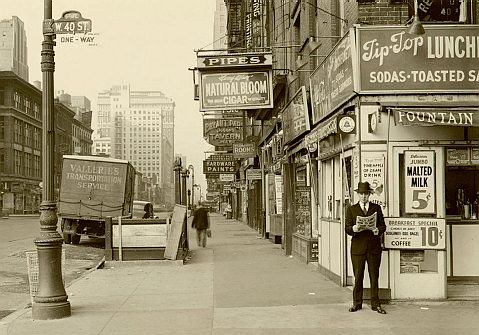 The photo at the top of this post shows the corner of Sixth Avenue and 40th Street in New York in May of 1940. The man on the right is reading a newspaper with the headline: “NAZI ARMY NOW 75 MILES FROM PARIS”.

Boy, those were different times, eh? And not just because the poets studied rules of verse (while all the ladies rolled their eyes). A jumbo malted milk could be had for a nickel, and breakfast with coffee for a dime. A good (Cuban!) cigar cost a quarter. The streets of Manhattan seethed with commerce while Europe seethed with war.

“But Baron,” you object, “what does all this have to do with the third day of your autumn fundraiser?”

Well. Not all that much, really. When I was searching for relevant illustrations for this week’s “Third Rails” theme, I stumbled across the New York City Municipal Archives, which proved to be a treasure trove of period photographs of the Big Apple. That’s where this excellent image came from.

However, in a way the scene on Sixth Avenue does bear on this week’s topic. The newspaper the fellow is reading didn’t reassure him that “the war in France has nothing to do with Nazism.” It didn’t inform him that the majority of Germans were peaceful, nor that the Blitzkrieg was the work of a tiny minority of extremists. Secretary of State Cordell Hull did not call for “dialogue” between the Germans and the French as a way of resolving their differences, or suggest that President Albert François Lebrun offer Adolf Hitler “land for peace”.

Yes, those were different times.

That was then, and this is now. Nowadays the major news outlets do not consider factual reporting to be a significant part of their mission statement. Above all else they peddle the “narrative”, however that happens to be defined by the cognoscenti at any given moment. If a few facts happen to trickle through during the process, that’s an added bonus. But it’s not the point of the enterprise.

That’s why we need alternate channels for the flow of information, which is where Gates of Vienna comes in.

However, if Dymphna and I were the only ones involved, pounding away at our keyboards here at Schloss Bodissey and passing on tidbits of information to our readers, there wouldn’t be much reason for you all to give up your hard-won dollars, pounds, euros, zlotys, and kroner to support what we do.

As I have emphasized many times in the past, this is a collective enterprise. What we do here would not be meaningful or effective without the dozens of people who work with us. The combined efforts of our collaborators make all the difference. Vlad Tepes does most of the video (and finds a lot of the translators). Fjordman, Takuan Seiyo, Paul Weston, MC, and all our other regular contributors add their own research and perspective to a variety of topics.

Then there are the numerous other activists whose work is just as important, but not as noticeable. The translators in particular are invaluable. There was a time when I used to be able to name them all in these round-up posts, but there are far too many of them now. Some of the biggest workhorses are JLH (German), Rembrandt Clancy (also German), Kepiblanc (Scandinavian languages), Henrik Ræder Clausen (also Scandinavian languages), ritamalik (Arabic), Oz-Rita (German and French), H. Numan (Dutch), SimonXML (also Dutch), DarLink (Russian and Hebrew), and Gaia (Italian). But there are many, many others — and I have probably offended some of them by leaving them off this list.

In addition there are anonymous tipsters and researchers who prefer to work behind the scenes, without stepping into the spotlight or having their names blazoned on the marquee. Their contributions are crucial, but generally go uncredited.

In order for all this to work, a diversity of opinion must be represented in this space. True diversity, that is — not of melanin pigment, but of ideas. As it says at the top of our sidebar, “We allow a variety of opinions here at Gates of Vienna.” And not just allow — encourage.

So when you see a press release here for Rabia Kazan, it doesn’t mean that we think her approach is the only one, or the best one, or even a good idea. It just means that, broadly speaking, she is on the same side that we are, and deserves to be heard.

If we acted otherwise — if we restricted all the material to opinions that matched ours — we would be peddling our own “narrative”. It would be different from the mainstream narrative, but just as rigid and restrictive in its own way. And by our refusal to consider alternative points of view, we might miss something valuable and important.

The generous folks who chipped in on the second day of our fundraiser hailed from:

Our deepest thanks to all of you — you all know who you are! And most of you have received your thank-you notes by now.

One thought on “Spreading the News”