Geert Wilders, the leader of the Party for Freedom (Partij voor de Vrijheid, PVV) in the Netherlands, is facing yet another “hate speech” prosecution for his public remarks about Islam and Moroccans.

CBN recently interviewed Mr. Wilders about the upcoming tenth anniversary of his regimen of 24/7 police protection. Some excerpts are below:

Marked for Death: One Man’s 10-Year War with Islam

Hated by millions and marked for death, Dutch parliament member Geert Wilders is one of the most controversial politicians in the world.

Wilders believes the religion of Islam is violent and dangerous, and because he has said so, publicly and persistently, he has had to forfeit a normal life. November 4 marks exactly 10 years Wilders has lived under police protection.

It began with the murder of Dutch filmmaker Theo van Gogh, who had made a film attacking Islam. Van Gogh was murdered by a Moroccan Muslim on the streets of Amsterdam after the film was made.

Dutch police believed Wilders might be in the next victim and showed up at his door.

Geert Wilders: They were wearing machine guns and bullet proof vests and I said, “Hey, what is happening?” And they said, “We don’t know what is happening but you have to leave now, in three minutes.” 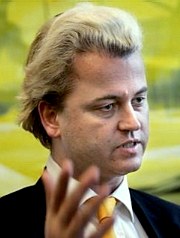 I just took some shirts and we went away and I didn’t know where we went, where we would go. The police didn’t even know. We changed cars and we ended up in an army barrack. And since then, 10 years ago, I have not been home.

It’s something you don’t wish your worst enemy to experience. It’s not only the threats. It’s the fact that you lose your freedom, your privacy. My wife and I lived for a few months in a prison cell, a prison cell in Zeist where the Lockerbie suspects used to be imprisoned. Nowadays we have safe houses. I live in a safe house provided by the state.

Dale Hurd: Do you every wonder if you made a mistake? Has this been worth it?

Wilders: I am sure I made no mistake. I make mistakes every day. I’m just human. I am full of mistakes. But to speak the truth about Islam, as I see it, and as the reality, is not a mistake. I wish many people did it.

I understand why few people do it because the price is very high. Besides the death threats you get from average people, from Islamic dissent, from organizations like al Qaeda or the Taliban, also a lot of people label as a “bigot” or a “racist” or an “extremist” – they try to hurt you in any possible way.

You are sued as I have been, and will be again, by a criminal court or by another court. They will sue you, they will threaten you, and they will label you.

So, I understand, it’s not very attractive to speak out against the dark forces of Islam, to be proud of our own values and identity, which I believe are based on Christianity and Judaism and humanism and not about Islam. And you pay a very high price, so I understand why people don’t do it.

But people should do it and what has happened with the Islamic State nowadays in the last few months has opened the eyes of so many people, so I hope it will change.

Hurd: You never wished you had done something else to have a normal life?

Wilders: No. I wish I had a normal life, yes. I would be lying to you if I didn’t say that my most important wish is to lead a normal life. But even more important than that is to fight Islam, to fight for our freedom, the freedom of our society, to be proud of who we are.

And I really strongly believe that Islam is dangerous, Islam is violent, Islam wants to dominate and not assimilate in our societies. And our countries, our free societies will change. And Christians, Jews, apostates – we will be the first ones to pay a price if Islam gets its way in our free societies.

Hurd: Is it unnecessary provocation for you to say, “Mohammed is a criminal, the Quran is poison, Islam is a lie?

Read the rest at CBN.

10 thoughts on “Marked for Death: One Man’s 10-Year War with Islam”