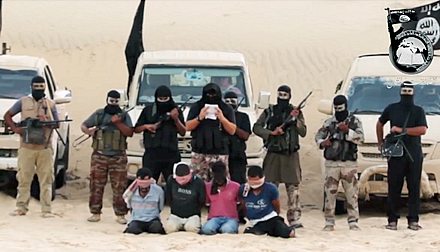 The Islamic State is popping up all over the place these days. In addition to their usual haunts in Iraq and Syria (they took Kobani today, despite massive air attacks by the United States and its allies), their adherents (or admirers) have been reported in Finland, London, Chicago, and Kosovo. And that’s just from today’s batch of news articles.

In Libya, the Salafist militia Ansar al-Sharia has pledged allegiance to the Caliph. There are also reports that ISIS has a presence in the West Bank.

A couple of days ago an ISIS affiliate from the Sinai released a video bragging about its violent actions against “Zionist agents” and warning the tribes of the region to conform to the dictates of the Caliph. The video is too graphic to remain on YouTube, but as of this writing it is still available on (CAUTION! Extreme violence at this link!) Dailymotion.

If you have the stomach to watch it, you’ll see some of the usual stuff — inspiring jihad songs in mujaharmony, blowing up buildings, the shooting and/or beheading of bad people who have done wrong in the eyes of Allah, etc. Most of the middle of the video is taken up by captives speaking earnestly into the camera. Some of them must surely be handcuffed, because you can see flies walk across their faces, and they shake their heads, rather than brush the insects away.

Portions of this video may eventually be subtitled. In the meantime, the following summary was written by ritamalik, who understands written Arabic, and some of the more standard spoken dialects of Arabic:

The video opens with Quran 5:51: “O you who have believed, do not take the Jews and the Christians as allies. They are [in fact] allies of one another. And whoever is an ally to them among you — then indeed, he is [one] of them. Indeed, Allah guides not the wrongdoing people.”

Then there is the beheading scene when the guy shouts that this is the punishment for all the apostate traitors. Takbir!

Then comes the voice of (I think) Khalifa Al-Baghdadi or someone like that, who gives a message to the people of Egypt in general and those of the Sinai in particular. That ISIS has been seeing a succession of treachery from them and how every day they discover a string of plots and conspiracies by them against Islam and the Muslims. Then he goes on to warn them about a group called “The Supporters of Beit Al Maghdas (Jerusalem)”, many of whom had turned out to be spies for the Jews. Then he denounces the Egyptian Army for killing the Mujahideen (ISIS fighters), and says that the Egyptians are fighting for the Jews and blockade the people of Gaza. And then says that Allah most high says that who ever makes friends with them (the Kuffar that is) is one of them! Therefore, he says, it is a religious duty to all of us (Muslims) to stand up to them. Then he quotes some more of the Quran about how God hates the Kuffar, who deny his light and so on.

Then the video shows an attack on the house of an Egyptian, a supposed traitor. The caption gives the name and age of the man and the accusation, which is belonging to the apostate Egyptian army and participation in many of their operations which caused the destruction and burning of Muslims’ houses and so on. Then it reads that the punishment should be the same as his crime. His blood is blood of a dog and he is wanted dead or alive.

Then the voice again says that they should attack their houses and explode their abodes and cut their heads off and fill their world with fear. Then he recites a part of Quran about Noah which says that God told Noah that his family who have done mischief are not of him anymore, and he should not consider them family (obvious parallels with Egyptian army members not being considered part of the Ummah anymore). Then the video shows the house of the poor chap being exploded, and the caption thanks god for the destruction of the house of the “apostate”.

Then comes a confession video. The guy is a soldier of the Egyptian army. I couldn’t understand a word that this poor guy had to say since he was speaking in some strange dialect. But the caption reads that he was a spy for the Jews. Then of course it shows the end to which he came later. He was shot in the head. The captain reads: “What is the harm in repenting before you are forced?”

Then he turns to the tribes in Sinai, and says that they have a special place in their hearts (of ISIS) and then warns them about some of their treachery, and says even if your children are with the enemy, beware of them. Some of them are the spies for the Jews and conspire against the Muslims. And says that on their tongues are now their confessions and in the book of Allah is their proscribed punishment. He says that they will be spared death only if they repent before they are coerced. (Meaning basically that if we catch them we will kill them!)

Then the video goes on to show a bunch of poor chaps who one by one come in front of the camera, tell their names and ages and tribes and confess that they worked for Mossad and the Jews and confess to various crimes, and in the end they warn their peers not to follow their example, and to repent before it is too late. Then it shows them being executed in cold blood one by one.

Then in the very end comes a warning to the Jews accusing them of denying Allah’s book that they know is true, but they deny it because of their stubbornness. It reminds them of the trial of tree and stone which will come in the end times to which they are condemned (alluding to the famous Hadith about trees and stones crying out in the end times that “Oh, Muslims, there is a Jew behind me. Come and kill him.”) and he says that we (the Muslims) are waiting for it!

What I wrote above is very paraphrased, but it may clear up what the video is about. Basically a very stern warning to the people of Egypt and especially the Sinai tribes who are pro-Egyptian government, and at least at the moment are making common cause with Israel. All of it backed up with Hadith and Quranic verses and theologically explained and graphically put into practice.

20 thoughts on “ISIS in the Sinai”