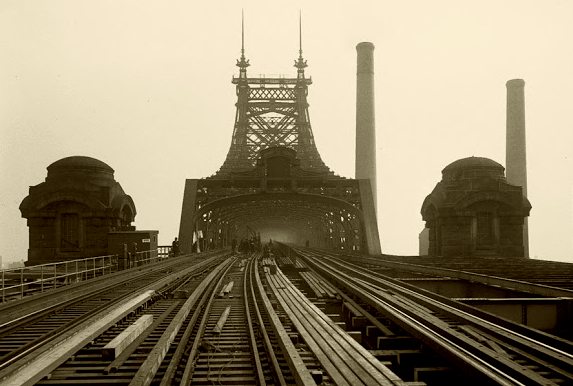 The image at the top of this post (the Queensboro Bridge in 1929) is another one that I found in the New York City Municipal Archives when I was searching for period photos that fit the “Third Rails” theme of this week’s fundraiser. It doesn’t really have any particular relevance to what I’ll be writing about tonight, but I love the grand sweep of the perspective, the intricate architecture, and the evidence of industrious activity in the background. No land is visible, so we are tantalized by the thought of what might lie before us or behind us at either end of the bridge.

Before we get to today’s principal topic — and before I dun you all vigorously once again to donate to our blog — I need to give you a cardiovascular update on Dymphna. She and I went to the cardiologist’s office yesterday, where she had her dressing removed and her pacemaker checked. The device is functioning properly, according to the technician. The variability of her pulse rate, which is somewhat worrisome, is due to the instructions sent by the atrium, the upper chamber of the heart. Now that the pacemaker is installed, that rate is communicated to the ventricle, which beats with the same frequency and prevents “complete heart block”, which was what sent us to the emergency room two weeks ago. When the atrium slows down, the ventricle slows down, but this variability is not caused by the pacemaker. I hope to have some discussions about this problem with the cardiologist himself, when we see him at our next appointment.

The surgical implantation of the device triggered a major PTSD episode for her, and she is still trying to regain her equipoise so that she can resume normal activities, including writing. She says her distress left her with a case of writer’s block, at least until last night, which is why we hadn’t been alternating our posts this week, as is our usual practice.

Now down to business: yesterday was a special occasion. Not only was it the midpoint of our quarterly bleg, but it was also the anniversary of the founding of this blog. And it’s not just any old anniversary, but our TENTH anniversary. Ten years ago yesterday, the first post went up at Gates of Vienna.

It’s hard to believe that we’ve been at this Counterjihad business for a decade, but we have. It was a part-time operation for the first two years, at least for me, but since 2006 it’s been mostly full-time. A lot of strange and alarming things have happened in the interim. But here we are, still slogging away at it.

Last spring I conceived the idea of collecting important articles and essays from the first ten years of Gates of Vienna and publishing them in a book. It would have to be self-published, of course, so most of the work involved would fall on my shoulders. I opened up the ancient archives and began collecting material, with the goal of having it ready to publish not too long after our tenth anniversary.

Well… it seems I was a bit overoptimistic.

A lot of events intervened between April and October. First there was the Orlando trip, and after that ISIS got going in earnest. Every week seemed to bring some urgent new project or crisis that kept Vlad and me up all hours of the night, producing the translations and videos and so on. There was never any spare time, and there still isn’t.

But I haven’t given up on the idea of the book. Some of the essays have been collected, and our major guest-essayists have given permission to have their work included.

What I’d like to see is a collection divided up into themed sections. There might be a “Multiculturalism” section, and it could include essays by Fjordman, Takuan Seiyo, and Paul Weston, among others. Scandinavia deserves its own topic, as does the UK.

Republishing any of the translated articles may be difficult, however, unless I happen to know the author of the original. Writers generally reserve rights to translations of their material.

I came up with a tentative design for the cover of the book. It’s based on a contemporary Turkish (I think) illustration of the siege of Vienna, from the vantage point of the Ottoman camp. The artist didn’t attempt to make an accurate schematic of the layout of the city walls, but since the Löbel Bastion was so crucial to the Viennese defenses, I like to think that’s what we’re seeing in the background. Those insouciant red-bearded feather-capped lance-carrying stalwarts strolling the ramparts are the Viennese garrison, hoping against hope that King Jan III Sobieski and the Polish hussars will come thundering down the Kahlenberg in time to save the city: 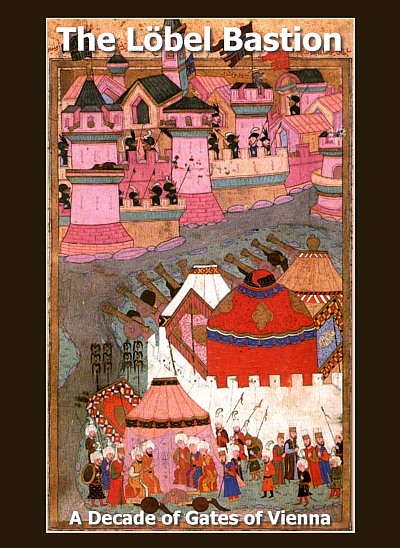 If this illustration looks familiar, it’s because I’ve used it before as the cover of an imaginary magazine. For the book, however, I took the trouble to straighten the image, restore the borders as well as I could, and clean it up thoroughly. I want it to look its best when company comes.

So stick around and see if the book happens. If I can manage to squeeze in a few minutes of work on it here and there, it might just come out before we ring in the twentieth anniversary of Gates of Vienna.

(For more about the Löbel Bastion and the breaking of the second siege of Vienna in 1683, see “The Other September 11th”.)

Thank you all for your ongoing generosity. We’re overwhelmed by the response.

9 thoughts on “Bridges and Bastions”