Many thanks to JLH for translating this excellent piece by Henryk Broder from Die Welt:

It’s nice that Muslims have protested against the Islamic State. But the distinction between Islam and Islamism is often hairsplitting. Sometimes, they are two sides of the same coin. 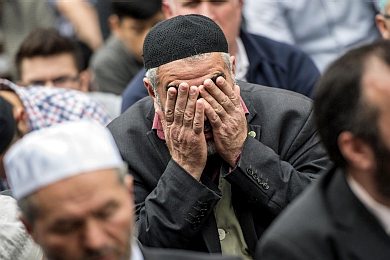 Sept. 19, 2014: More than a thousand Muslims demonstrated in Berlin-Kreuzberg against racism, xenophobia and extremism with a public prayer for peace.

Dear Muslim Fellow Citizens and Descendants of the Prophet Mohammed,

I don’t know if that is the right form of address. It seems a bit awkward. I am inclined to say, Dear Musulmen and Musulwomen, but that, I fear would be politically incorrect And I don’t want to insult anyone. Especially since we have something in common. I too am a citizen with an immigrant background. I was eleven and spoke no German art all, when my parents left Poland and traveled to Cologne by way of Vienna. Cologne, of all places. At any rate, Kattowitz, where we came from, was even uglier.

When I look back today, I can only say that I had a crummy childhood. Not because of the “Welcoming Culture” that emanated from Colognese and Carnival, but because of my parents. They had survived the Nazi era, but their souls had stopped dead in their tracks. Our home was a purgatory of remembrances. Nonetheless, I never had the urge to blow myself up or join a terrorist group. Even though all l wanted was just one thing — to get out of this never-ending misery.

Life had something to offer — even in Cologne. Maastricht was just around the corner, Amsterdam was only three hours away. I am just saying that to make it clear that I wasn’t born on a yacht with a golden Visa card in my hand. So much for me. Now for you.

Deeds Cannot Be Separated From the Doers

I thought it was good that you “set an example” last Friday and demonstrated against racism, fanaticism and barbarism, which, as all speakers unanimously confirmed, has nothing to do with “true Islam.” You distanced yourselves from the crimes that were committed “in the name of Islam.” Anyway, I was overcome by a sensation of déja vu. Where had I heard this formulation before?

Oh, right! At the memorial ceremony for the liberation of the Auschwitz concentration camp, and for the day of the book-burning, and on every November 9th recalling “Reichskristallnacht,” and at all the state visits of German presidents in Poland, France and Greece where they ask forgiveness for crimes committed “in Germany’s name.”

And every time, I wondered, how was it possible to lay waste half of Europe, kill millions of people and still separate the doers from the deeds? Had the Germans authorized some sub-contractor — some Ltd. — to fetch Austria home to the Reich, to attack Poland, to level Rotterdam and Coventry, while they themselves were off rambling — with Strength through Joy — on Rügen and in the Bavarian Forest?

And today, I wonder, how can crimes be committed “in the name of Islam” and have nothing to do with Islam and not reflect on Islam?

How to Distinguish the “True” From “Not the True” Muslims?

“Believe me, terrorists are not Muslims,” said a young man on the edge of the rally last Friday. Where did he come by this information? Do they not pray five times a day? Do they not bow in the direction of Mecca? Do they perhaps eat pork and wash down the evil aftertaste with a bottle of Jack Daniels? Or could it be that the fighters of IS consider themselves to be the “true Muslims” and all others who are not in a position to lop the head off of an “infidel” to be marshmallows who deserve the same fate. Has someone developed a litmus test — or a urinalysis — to distinguish “true” from “false” Muslims?

If IS is not Islamic, then the Inquisition was not Christian. And Torquemada was only torturing “in the name of Christianity,” while the “true Christians” were preparing for the next ecumenical congress. And the Crusaders? Those were the first adventure vacationers. Everything included, so to speak.

What irritates me even more, my dear kindred, is another formulation repeated like a mantra recently: “Islam is perfect. Only some Muslims are not.” A sentence that sounds wise and conciliatory. No one is perfect; anyone can make a mistake. Of course, the sub-text is totalitarian. Just as there is no such thing as a perfect human being, there is also no perfect system, no perfect religion.

Every democrat knows that democracy is not a final state of affairs, but a work in progress. It must constantly be improved and amended. It is like wanting to know what is beyond the horizon. You constantly approach, but never get there.

Atrocity as a Mere Human Failing?

Only adherents of totalitarian systems are so consumed by their faith that they think it is perfect. Communism was perfect, and so was National Socialism. If there were problems putting it into effect, it was because of people who were not up to the task. And now Mohammed’s followers are walking in the same argumentative footsteps. He was a perfect human being, Islam is perfect, but some Muslims are not.

A magic formula like this means every atrocity can be traced back to “human failing” and justified. That is the reason for inventing the difference between Islam and Islamism. Islam is a “religion of peace.” That has been emphatically confirmed recently by President Obama, Prime Minister Cameron and German Minister of the Interior Thomas de Maizière.

Islamism, on the other hand, is an “inhumane ideology,” whose path is paved with corpses. And the one has nothing to do with the other. Except that the crimes committed “in the name of Islam” are blamed on Islamism.

Honestly, that is too complicated for me. I don’t get it. Maybe somebody can help me clear it up. Are the attacks of 9/11 the responsibility of Islam or Islamism? Hanging homosexuals from construction cranes, stoning adulteresses and chopping off hands and feet as punishment for theft — do these correspond to the commandments of Islam or the practices of Islamism? Do the attacks in London, Madrid, Bali, Poona, Mumbai, Djerba, Ankara, Amman and Nairobi — to name a few — point to Islam or Islamism?

So What Remains of Islam, And What is Now Islamism?

When Hamas condemns a dozen alleged traitors and has them shot to death in the courtyard of a Gaza mosque — is that done in accordance with the regulations of Islam, or because the Islamists wanted it? When millions upon millions of Muslims demonstrate against a few Mohammed cartoons that they have only heard about, and if ca. 100 people die as a result of these movements, should we attribute that to Islam or the Islamists?

And when an imam who has fled Denmark calls in a Berlin mosque for the “Zionist Jews to be hunted down and killed to the last person,” does that articulate the benevolence of Islam or the harsh tone of Islamism?

There are fanatics in every religion who take their faith so seriously that God, if he does exist, would avert his countenance in revulsion. Among the Protestants it was the recently expired Ian Paisley who did all he could to prevent a resolution of the Northern Ireland conflict. Among the Catholics, it is the British Bishop Richard Williamson — a proven anti-Semite and a Holocaust denier. Among us are the madmen of Neturei Karta, who see themselves as the only “true” Jews and consider the Holocaust a just punishment by God. They pray several times a day for the arrival of the Messiah, and hope for the destruction of Israel, better sooner than later.

In no other religion — I am sorry to say — are the throngs of fanatics so fully packed as in your case, dear neighbors in the great house of monotheism. And that has nothing to do with the fact that there are ca. 14 million Jews worldwide, 800 million Protestants, 1.2 billion Catholics and 1.5 billion Muslims.

How Many Christians and Jews Fight With Fire and Sword?

Every practicing Christian, every observant Jew is of course convinced that one religion is superior to the other. That is also true in secular belief communities — vegetarians, nuclear power opponents, and those who preach the end of the world through climate change.

But how many Christians and Jews today are trying to establish their religion with fire and sword? When was the last time that a Jew or Christian blew himself and others up because some infidel had insulted Jesus or Moses? With the exception of Ireland, when was the last time that Catholics and Protestants went after each other as Sunnis and Shi’ites are still doing today?

Possibly Islam and Islamism, for which there is even a comparative form — radical Islamism — are not fully congruent. But the segue is fluid. Do Hamas, which runs Gaza, and Hezbollah, which is involved in the government in Lebanon, belong to the Islam wing of the Ummah; while Boko Haram, al-Qaida, al-Nusra, al-Shabaab, the Sauerland group and the two Nigerian converts who literally hacked British soldier Lee Rigby to death on May 22, 2013 lean a bit more to Islamism? Only one thing is clear. They are all topped by the Islamic State, and it will not be long before some even more radical group will top the IS.

As I said before, I think it is good that you set an example, with the German minister of the interior, the president of the Central Committee of Jews in Germany and the chair of the council of the Protestant Church in Germany, all of whom spoke to you as one speaks to dimwitted children — veerry sloowwly, pronouncing each word.

Anyway, you only hit the street to demonstrate against fanaticism after two Americans and one Brit were beheaded by an IS killer. That was naturally crappy PR, both for Islam and Islamism. And these weren’t the first beheadings in “the name of Islam.” In Karachi, in January of 2002, Daniel Pearl — a Jewish journalist from the US, who worked for The Wall Street Journal, was executed in similar fashion. Responsibility was claimed by a “National Movement for the Restoration of Pakistani Sovereignty.”

Since then, an increasing number of infidels and traitors have been beheaded, as was the custom in Mohammed’s day, and is still in Saudi Arabia. Last Friday, the headless body of a Bedouin was found in the proximity of the city Sheikh Zuweid in the north of the Sinai peninsula. The man was said to have spied for Israel. Since he was neither American nor British and the “execution” was not videotaped, it did not come to general attention.

I fear you will soon have to get moving again and set another “example.” For the Heute-Journal, for the Tagesthemen, for the Minister of the Interior. Unless, something better occurs to you; especially something to reach the young people who are going to Iraq and Syria. Including, of course, underage girls who want to marry a “martyr.” How about a rock concert in the Duisburg-Marxloh mosque? Or a jihad for free love?

Salaam and Shalom to all.

24 thoughts on “An Open Letter to German Muslims”