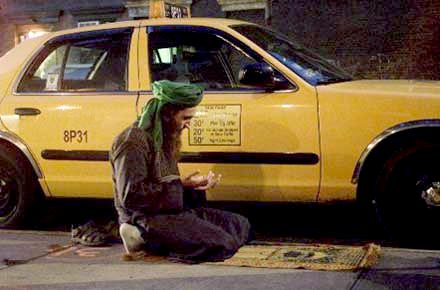 The big news story* yesterday in Canada was the multiple beheadings of randomly-chosen pedestrians on the streets of Ottawa and Montreal. Prior to those attacks, the Islamic State had warned the Canadian government that Canadian civilians would be randomly targeted on the streets, just as they had planned in Australia.

In the wake of the tragic deaths, which officials emphasize had nothing to do with Islam, the Canadian government has announced strict new anti-extremism measures. One of them was a government directive ordering Canadians to change some of their routine activities:

IDSS director to Canadian citizens: Avoid being pedestrians in public

A top national security official Tuesday warned Canadian citizens to avoid being pedestrians in public to avoid becoming targets for extremists. The move was announced in the wake of deadly attacks on pedestrians in Quebec and Ontario.

In a directive titled “urgent measures,” Guillemot Hephzibah — who heads the Intra-Dominion Security Service, the Canadian equivalent of the Department of Homeland Security — tells citizens “to refrain from acting as pedestrians on the streets of Canadian cities and towns.”

The note also asks citizens to avoid footpaths in parks for the time being and to get the message out quickly, according to the Halifax Herald News.

The IDSS directive was sent out about an hour after the latest beheadings in Ottawa and Montreal.

In Halifax, IDSS spokesman Rademar Griswold told the Herald News that civilian security measures have been changed from the norm.

“The Canadian public is continually adapting to meet the demands of an evolving security environment,” he said.

In a press conference this afternoon, Director Hephzibah told reporters that the new provisions were urgently needed, and would apply to all citizens and residents of Canada.

“The extremists who commit these bestial criminal acts single out pedestrians as their targets,” he said. “Therefore, we intend to deny them these targets.”

When asked how citizens will be able to move from place to place, Director Hephzibah said, “People may ride a bicycle, drive a car, take a bus, or call a taxi. They have plenty of options. If they are unable to do any of these, they may call their local IDSS office and request an anti-extremism national security escort. A squad of trained IDSS pedestrians will be immediately dispatched to their home or office to accompany them on the street and ensure that they arrive at their destination safely.”

However, resourceful citizens have already gotten around the new rules by riding on the backs of large dogs to do their shopping. When asked about this practice, Director Hephzibah replied, “Technically speaking, caninians are not pedestrians. However, we are in the process of changing the regulations to close this loophole, and expect to issue a revised directive tomorrow or Thursday.”

To the accompaniment of hisses from disapproving fellow reporters, one correspondent asked: “Will people who call a taxi to avoid becoming pedestrians be allowed to ask for a non-Muslim cab driver?”

“Absolutely not!” said Guillemot Hephzibah firmly. “That would be racist and discriminatory. If we were to permit that, the terrorists would have won.”

8 thoughts on “A Pedestrian-Free Canada”