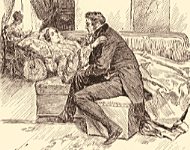 Dymphna is not feeling well. She’s been under the weather for the past few days, which is why you haven’t heard much from her. I took her to the doctor this afternoon, and she’s still resting up from that.

Due to her indisposition, she’s been unable to answer a lot of her email, and asked me to apologize on her behalf. I’m not sure when she’ll be able to catch up, but she’s feeling better than she did this time last night.

When she’s not well, the last two activities to go are commenting at Gates of Vienna and cooking meals for the two of us. So far she is still doing both of those things, at least sporadically. So you may hear a few words from her in these comments, sooner or later.

And I occasionally get to eat some tasty food, too…

9 thoughts on “Under the Weather”