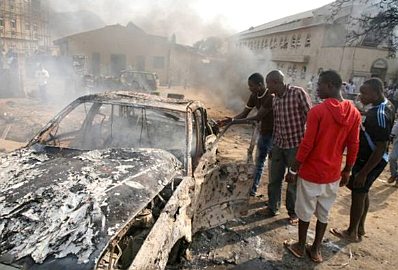 Shortly after the September 11, 2001, attacks on the US, President George W. Bush established a protocol still observed by politicians worldwide more than 13 years later. According to the Bush protocol, any mention of Islamic terrorism must quickly be followed by a disclaimer pointing out that Islamic terrorism is nothing to do with Islam.

“Islam is peace,” Bush said six days after the attacks, which killed nearly 3000 people. “These terrorists don’t represent peace.” Bush returned to that theme during his second term: “I believe that Islam is a great religion that preaches peace.”

Thus began a tradition repeatedly followed all over the planet.

“There is not a problem with Islam. For those of us who have studied it, there is no doubt about its true and peaceful nature,” said former British PM Tony Blair. Current Brit PM David Cameron said almost the same after British aid worker David Haines was beheaded by Islamic extremists: “Islam is a religion of peace. They are not Muslim, they are monsters.”

President Barack Obama is another follower of the Bush protocol: “ISIL is not Islamic. No religion condones the killing of innocents.”

Many in Australia, from Prime Minister Tony Abbott down, have lately joined in on the “religion of peace” mantra. Here’s attorney-general George Brandis: “It is one of the world’s great religions. The suggestion that mainstream Islam is anything but a religion of peace is nonsense.”

Liberal senator Concetta Fierravanti-Wells: “The terrorists are misusing the name of Islam and giving the community a bad name. I would implore the Australian public to understand this is not about Islam. It is about terrorists and a death cult.”

NSW premier Mike Baird: “This is not about religion. This is about criminals intending to act criminally in association with terrorism organisations.”

Labor leader Bill Shorten: “This war is not about religion. This is about evil people in some other parts of the world twisting religion to their own violent and criminal ends.”

Queensland premier Campbell Newman, following last week’s terror raids involving around 800 police officers across two states: “This is not about a particular group in the community. This is about a very small group of criminals who wish to undertake criminal acts against the community.”

Goulburn prison may also be host to someone with political ambitions. After Saturday’s beardo uprising at the prison, a source spoke to the Daily Telegraph. “Something had happened they weren’t happy about,” the source said. “The issue wasn’t a Muslim-related issue, but it was the Muslim guys who got into it, yelling out to Allah.”

They were “yelling out to Allah” but it “wasn’t a Muslim-related issue”. To be fair, the source probably meant that the issue that prompted the riot was not Muslim-related, but the phrasing nevertheless recalls last year’s bewildering media response to the murder of British soldier Lee Rigby.

Killer Mujahid Adeboloja, his hands covered in blood, subsequently stood in the street near Rigby’s almost-decapitated body and explained himself. “We swear by almighty Allah we will never stop fighting you. You people will never be safe,” Islamic covert Adeboloja said. “There are many, many ayah throughout the Koran that we must fight them as they fight us, an eye for an eye, a tooth for tooth.”

Sinclair: “Is there any indication of the background of the suspects involved?’

McIlrick: “No indication as yet, Hannah.”

The ABC’s London correspondent was equally perplexed. “What happened was clear,” he said. “The motivation, less so.” No wonder Muslim extremists are frustrated. They literally stand in the middle of the street telling everybody that they killed for Allah and nobody seems to hear them.

It’s just bad luck, I guess, that the religion of peace attracts so many people of violence. Could’ve happened to any religion, really, although it’s rare to hear of anyone flying jets into buildings to honour Krishna or screaming oaths to Ganesha while cutting someone’s head off.

Only a few dare to go against the whole religion of peace theme. One of the them, interestingly, is British Islamic extremist Anjem Choudary. “You can’t say that Islam is a religion of peace,” he told interviewer Erick Stakelbeck in 2010. “Because Islam does not mean peace. Islam means submission. So the Muslim is one who submits. There is a place for violence in Islam. There is a place for jihad in Islam.”

Thanks for the clarification, Anjem. By the way, this column is nothing to do with Islam.

20 thoughts on “This Post Has Nothing To Do With Islam”