To Gates of Vienna readers:

The letter below about the Qatar Awareness Campaign is being mirrored today on websites and Facebook pages across the spectrum of Counterjihad workers in this country.

If others want to mirror it, or place the image on their sidebar, please feel free to do so. It is vital to bring to public awareness the depth of evil of this purported “friend” of America. Back in normal times, such an alliance would never have been countenanced.

Please spread the message. I’ll have further announcements through the week as my health permits.

To the American Public: 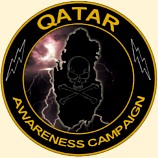 In light of the wars and violent turbulence that currently engulf the Middle East and parts of Africa, a coalition of concerned citizens, journalists, and activists are launching a campaign to expose a most infamous and pernicious sponsor of Islamic terror: the Gulf state of Qatar.

Qatar, (pronounced “cutter,” or “gutter”), is, per capita, the richest country in the world ($93,352 in 2013). This is partly due to the fact that they control the third largest natural gas reserves in the world, the North Dome field in the Persian Gulf. It is also because Qatar has a mere 278,000 citizens, with a total population of 2.05 million; the remaining people in Qatar are a mix of well-paid ex-pats from countries such as the United States and Great Britain, and a substantial slave labor population.

A backer of international terror from Nigeria to Gaza to Syria and Iraq, the Qatari ruling family, the al-Thanis, exploit Islamic jihadi groups and their ties to illicit smuggling.

What is being smuggled? Mostly narcotics and people — slaves.

Unfortunately, the United States is integrated into the Qatari “economy” as much as any other developed nation. Doha, Qatar’s capital, is home to two of the largest American military bases in the entire world, as well as familiar companies like ExxonMobil, Boeing, and Lockheed Martin. Doha also hosts a number of campuses for prestigious American universities, such as Georgetown, Carnegie Mellon, and Cornell. Other companies and organizations, ranging from the film production company Miramax to financial behemoths like Bank of America, have accepted significant amounts of investment by the al-Thanis.

Hamas, a Qatari client, launched a war against Israel this summer. There is an ongoing genocide across Iraq and Syria, with mass graves and grisly beheadings of Christians and Shiite Muslims. Boko Haram continues to rampage across Nigeria, threatening the political stability of Africa’s largest economy and population. Qatari fingerprints are on each of crises.

Over the course of the next month, companies, organizations, and individuals with significant investments and activities with and in Qatar will be identified and contacted with the reality of their host country. These letters, once published, will be sent to press outlets around the world.

We call on the parties identified in this campaign to review the evidence, which is all credibly sourced and vetted. In light of the terror, slavery, genocide, and narcotics trafficking, we urge the parties to demand that Qatar immediately cease any and all involvement in these activities.

Go here to see those who have signed onto the petition. It is certainly a varied crew!

2 thoughts on “The Qatar Awareness Campaign”