Frank Gaffney of the Center for Security Policy sent us the following email this morning:

I just left a meeting with a Senior Congressman on Capitol Hill.

The information I received from that meeting astounded me. The first thing I’ve done is sit down and write you this email … the information is that important.

The Congressman and I were speaking about matters of national security. The conversation naturally turned to the Islamic State (also referred to as ISIS or ISIL) and the threat it poses. As we were talking, I explained the tragic use of the Arabic “N” on Christian houses … and the Congressman had no idea what I was speaking about. Once I was done explaining this, he told me he was positive few Americans are aware of this as well.

Today alone, Islamic State jihadists will kill 100 or more Christians in Iraq and Syria. They are attempting to commit genocide against Christians. Now, you know me. I rarely discuss religion. But this isn’t about religion as you’ll soon read.

The Islamic State has an efficient method to their extermination practices. They send “scout” troops into villages who identify and mark Christian homes with the Arabic letter “N” — which is shorthand for “Nasrani,” or Nazarene: a Christian. The commando brigade follows shortly, and offers anyone who remains in these homes the choice of convert, submit or die. If the jihadists opt for the latter, the usual methods include crucifixion or beheading — even of children! 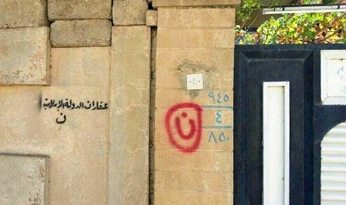 When I asked the Congressman why he thought he hadn’t heard about this practice, he said something to me that was startling in its simplicity. “They’re beheading journalists. As a result no journalist will go into this area to report, for fear of meeting the same fate.” As much as I typically blame a left-leaning media for the lack of important information … I realized he was right. The Islamic State has ensured they can conduct their Christian genocide in secret.

The reason: Islamic State jihadists are headed here. They do not want Americans to know what is in store for us.

The point the Congressman left me with was this:

If the media is too scared to report on, or lacks information to inform the public about these atrocities, it’s up to CSP to get the message out. He was adamant that the organizations who care most about America must inform Americans about this horror. 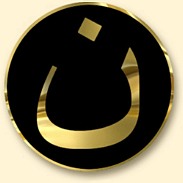 He wants to work with me to make sure that this symbol becomes THE SYMBOL for fighting terrorists. I’ve been wearing a pin (see the image at right) with this symbol on it since we received them only days ago, to show solidarity with Christians and to indicate that I will not let America fall into the hands of terrorists.

Please help me change that. Wear this pin with me and use it as a way to start a conversation. Give this pin to others. Help me make this symbol a household name, and ensure Americans know the enemy we fight.

This Congressman plans to wear one, and help me distribute the pin to other Members of Congress. Given my full schedule, this is no small task. But it’s essential.

For a small, tax deductible donation we will send you one or more pins. Please use this link to connect to the donation page and see the options available. It was expensive to get them made on short notice — but frankly, we just couldn’t wait. Please donate to get one for you and a handful for friends. Help us inform America of the terror that awaits if we don’t take action.

With best regards and heartfelt thanks for your love of our country and your help in securing it.

21 thoughts on “Stand With the Nazarenes”