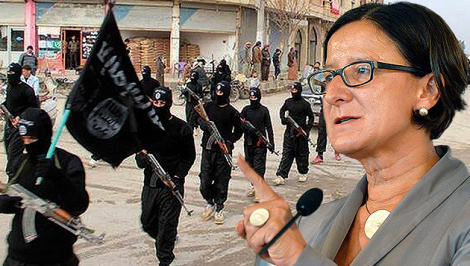 JLH has translated an excellent op-ed by Christian Ortner from the Austrian daily Die Presse:

So What Does Islam Actually Have to do With Islam?

Brutally excluded, marginalized: there is nothing left for young Muslims in Austria except to become jihadists. Really?

Baffled, our country has been wondering for weeks… What is causing young Austrian Muslims from Favoriten [Vienna, 10th district] to travel to Syria to make war on infidels? Carla Amina Baghajati (herself a convert), speaking for the Islamic Religious Community, has a well-worn explanation. Islam the religion is not the cause of this development, but “the exclusion of the young people, who have no prospects for their lives and are being marginalized.” (“Im Zentrum,” [on ORF, Austrian national broadcasting] Sept. 14).

But who really is excluding these young people, making sure that they have no prospects and marginalizing them? Apparently, only the interculturally unempathetic, non-Muslim majority population can be responsible for the terrible misery being inflicted on young Muslims here, leaving them no other choice but to finally seek their prospects on the battlefields of Syria, and thus no longer feel excluded. A little beheading here, a little crucifying there, and a person feels valued and accepted.

In a word… The basis of modern European jihadism is not the religion nor the medieval canon of values in segments of the immigrant milieu, but the dominant, local Western lead culture. We are at fault. Who else?

The idea of perpetrators who are actually victims is a theory that is widely spread among Western leftist intellectuals (unless, of course, the perpetrators are rightist extremists). The well-known Islam scholar Reinhard Schulze has recently explained to us that one of the four Muslims who carried out a massacre in the London subway in 2005 had previously been rebuffed by a white British woman in a disco, and that was the reason for his “resentment” of “the West,” and had led to the terrorist attack. The affinity for violence of young Muslims, according to a relevant study, can be traced “to individual experiences of violence and emotional neglect in childhood.” And, as another German Islam expert, Jochen Müller, recently explained, these ultra-violent videos that are such a turn-on for some young Muslims, are… “the ultimate form of protest, rebellion and aggression against the world they are dissatisfied with.”

We get the point. If Islamophobic sluts in the disco tell young Muslims to get lost, or if Muslim parents are not sufficiently anti-authoritarian in raising their children, then there is nothing left for these traumatized men but to embrace the noble pursuit of jihad. If for no other reason, then because they don’t have to stand around stupidly chatting up the local women they want to have sex with. They can just go ahead and rape them, and no one will look askance.

This therapeutic formulation from countless European connoisseurs of jihad gives rise to fitting suggestions for solutions. Mrs. Baghajati urges “social preventive measures,” “continuing education for teachers” and all the other placebos prescribed so energetically when the intent is to cloud unpleasant facts.

Another fact, expressed by the Dutch author, Leon de Winter is: “After the leftist fascism of the Soviets and after the rightist fascism of the Nazis, Islamism is the fascism of the 21st century.” This fascism will not be controlled by methods like teacher training, roundtable conferences and inter-religious dialogue.

13 thoughts on “So What Does Islam Actually Have to do With Islam?”