The Baron has spent hours on the phone talking to the techies and fixers, though to no avail. Finally, he went to do the marketing for me since our vegetable situation was critical…

…and y’all know that Schloss Bodissey is at the Edge of Beyond – or rather, smack dab in the Middle, where there be monsters – so it will be a while before he returns.

I have no idea what brought us down, but there was talk of how long it takes to propagate a new something-or-other. It’s whatever all those little numbers are called. And yes, they shouldn’t let me near a computer given the level of my ignorance. 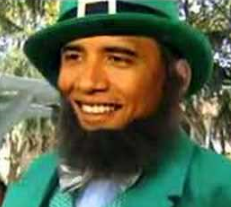 It was leprechauns in the intertubes, that’s what it was. I almost grabbed one – even had the edge of his coat – but all I have to show for my efforts is a bit of tattered green cloth. Do you think they might be lying about their purported pots of gold? Have you noticed President Obama looks a bit like a leprechaun? He’d never make the height limits, though. I can’t picture him crouched under a toadstool, can you?

In the meantime, a placeholder post to let y’all know we’re not dead. Thanks for the concerned emails, too.

4 thoughts on “It Figures…”