Below is the intervention read this afternoon by Maj. Stephen Coughlin, representing Mission Europa Netzwerk Karl Martell at the OSCE Human Dimension Implementation Meeting, Session 13: “Tolerance and non-discrimination II, including prevention and responses to hate crimes, aggressive nationalism and chauvinism”. 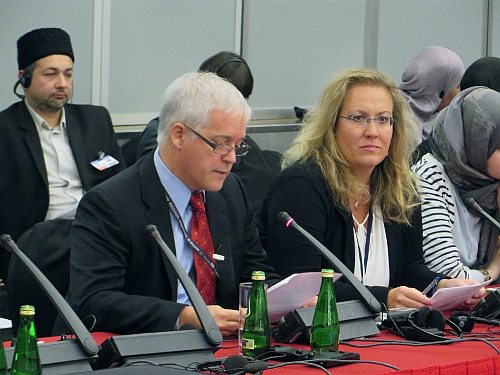 The question “What is the role of inter religious and inter-community dialogue in addressing tolerance and non-discrimination and what can governments do to encourage and facilitate it?” raises concerns.

Stated in the negative, at what point does government coercion to engage in inter-religious dialogue run counter to the religious interests of those undertaking it who in theory are speaking on behalf of their faith community? This is especially true when discussions disproportionately serve the interest of one religion to the detriment of the others.

A parallel concern is that interfaith dialogue today tends to follows relativist rules that subordinate faith interests to diversity concerns through narratives designed to suppress reason. In such an environment, interfaith “partners” all to commonly become caught up in the fraternal need to bond over the need to protect equities.

Interfaith dialogue should follow its own flow and rhythm; should be undertaken by faith leaders who remain committed to reason that is capable of looking past relativist narratives that creates an equivalency between the sheep to be defended and the wolves to be watched. In this, government should play little or no role.