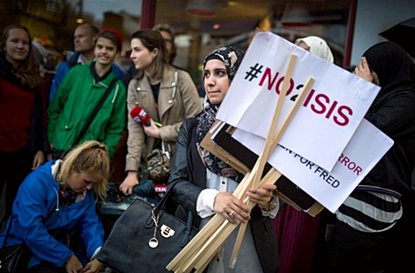 Our Norwegian correspondent The Observer sends a translation of an article published yesterday at Human Rights Service concerning an anti-ISIS demonstration that took place last month in Oslo. The translator includes this note:

There is a link in the original article to a SUN News TV clip and article featuring Tarek Fatah (the Canadian journalist mentioned in the article).

The funny thing is that the MSM in Norway actually believe that this demonstration (which occurred about two weeks ago in Oslo) is proof that Muslims in Norway renounce jihad and what they, the MSM, view as Islamic extremism. They MSM have surely been duped by their own stupidity.

Hege Storhaug and HRS have of course also been hounded in the press (Norwegian-style) for exposing the MSM’s own ignorance on this matter.

By the way — the overwhelming majority of the people who attended the demo against ISIS, which was heavily promoted by the MSM and actually streamed on live TV, were ethnic Norwegians.

The 19 year old Muslima who is mentioned in the article has become somewhat of a hero amongst those on the Left in Norway, who view her a moderate Muslim who renounces jihad, etc. Talk about cognitive dissonance…

Has Norway gone completely off its hinges?

Nothing in our country is more divisive than Islam. When do we come to the realization that enough is actually more than enough? Are we going to continue to ignore matters related to Islam that we deliberately choose not to see with our eyes wide open? Oriana Fallaci had some thoughts on that particular subject.

The demonstration against so-called extremism on August 25 was a crossroads. When I say “so-called extremism”, it is because the impression one is left with is that the (Muslim) protesters primarily demonstrated against the Sunni extremists of IS and not against the extremism that is manifesting itself in the world and justified in the name of Islam. The majority of the protesters were Kurds and Shiites, whom IS is butchering indiscriminately. In other words, it appears that we were witnessing an ethnic and sectarian demonstration. 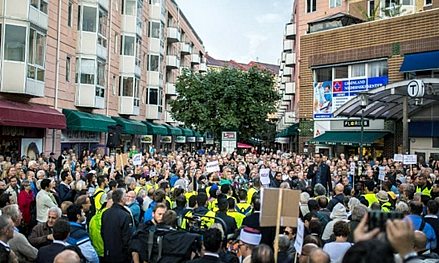 In particular, we noted that Tarek Fatah, born in Pakistan, Canadian citizen, journalist and author, was present during the demonstration and chatted with several of the hijab-clad Arab and Somali women who were present at the rally. All of them told him that they were against IS. None, however, was against jihad. In fact they actually supported armed jihad.

Nevertheless, a unanimous Norwegian media have hailed this demonstration as an historic event: The message from the news editors was that Muslims from all backgrounds came together to unite against extremism.

Then along came those annoying party-poopers with a rather unpleasant disclosure: listen up, isn’t it just a tad extreme to support amputations and decapitations, and to wholeheartedly embrace the ideology of Ayatollah Khomeini? Do you really have to portray a young Islamist as a hero, one who actively proselytizes for the Khomeini regime?

This is the crossroads: the media and even the secular organization LIM, chose to embrace the media’s new “darling Islamist”, 19-year-old Faten Mahdi al-Hussaini — and aggressively attack the party-poopers in HRS. The ideological theatrics on display truly gave me the chills. Al-Hussaini was exploited to the fullest and given center stage at the conceited Islam-friendly manifestation.

In other words: a young woman in hijab, who wants to live in an Islamic state, a woman whose every waking hour revolves around Islam, a woman who was at the time of the demonstration and still is a spokesperson for those who long to live in a Khomeini-run regime, something that neither al-Hussaini herself or any of the other members of her group, Stand4Hussain, tried to deny after we made the media aware of this fact. Nevertheless, and despite having been presented with this knowledge, the media and other involved parties still refuse to take these tragic and extremely grim revelations to heart.

Have we really reached the stage in the Norwegian public sphere that everything is edible, yes, even heroic, as long as people do not take up arms in the name of Allah?

Islam has been handed a lot of power in Norway, simply because journalists are ignorant and in all likelihood also cowards. Who would bother to put themselves in a position where they run the risk of being ostracized? Additionally, we see the lack of equal treatment coming in from the sidelines. One example: Vårt Land recently featured an article with al-Hussaini.

The opening paragraphs of the article make comparisons between IS and the “other extreme”.

Extremism is not an exclusive Islamic phenomenon; Hege Storhaug is also extreme.

When I read that particular sentence, a George Orwell quote entered my mind: “In a time of universal deceit, telling the truth is a revolutionary act.”

When it comes to genuflecting to Islam there don’t seem to be any limits in the heads of some journalists, nor do there appear to be any limits in regards to the methods they use to label critics of said religion. Could it be that these journalists are starting to sense the extremism that they have personally helped to facilitate by refusing to shed light on Islam’s problematic relationship with freedom? And could that perhaps be the reason why they are now singling out “scapegoats”, i.e. individuals who have worked tirelessly over the years to uncover and shed light on unacceptable facts?

I shouldn’t really have to say this, but I would like to remind potential new readers about the following facts: I have spent 22 years working for the rights of Muslim women and girls and to see them enjoy the freedom that the rest of us take for granted. I don’t need to remind people about what’s going on under the auspices of IS.

However, our elite in the media and academia still dare not address the elephant in the room, and the bigger the elephant grows, the more extreme their methods become. The simple truth is as follows: the Qur’an and Sunna gives IS “holy” carte blanche; still the “torchlight procession journalists” will cite any spokesperson’s clichés about Islam is peace, love and freedom.

And that’s where we are stuck in the public discourse.

The fact that Islam is in desperate need of a new prophet, not to mention a Martin Luther, is one of the most obvious realizations on earth at the moment for those of us who value truthfulness. Just as obvious as the fact that those of us who live in the Christian civilization may consider ourselves blessed that an apolitical Jesus came along with his message of forgiveness and mercy and then buried the laws of Moses, and that the church did the same: They viewed the sometimes violent Old Testament as an historical document.

An increasing number of parties see the benefit in obfuscating Islam’s overriding problem with humanism and modernity. In fact they are so hard at it that the sweat is literally streaming down their faces. What other religion or ideology that has brought so much suffering and darkness would escape critical investigation?

I can think of none.

Why is it so important for the media, Aftenposten, VG, NRK, TV2 — and so on — to dress the elephant in a burka instead of confronting a growing problem that could ultimately kill the spirit that our civilization is built on?

I think that is a question that the media should answer themselves.

Today is good day to commemorate the late Oriana Fallaci. She told it like it is:

‘The moment you give up your principles, and your values, you are dead, your culture is dead, your civilization is dead. Period.’

11 thoughts on “Has Norway Gone Completely Off Its Hinges?”