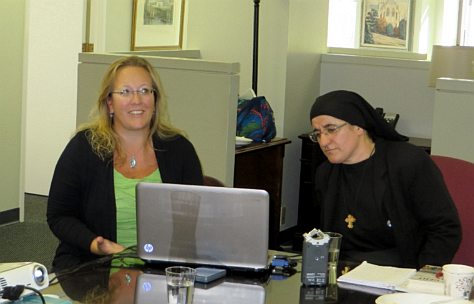 Last Friday Elisabeth Sabaditsch-Wolff and Sister Hatune Dogan gave a presentation at a breakfast meeting hosted by Faith McDonnell at the Institute on Religion and Democracy in Washington D.C. I was fortunate enough to be present at the event, and was tasked with doing the video recording (which wasn’t so bad a job, since I was able to leave the camera motionless on the tripod for 90% of the time — otherwise the footage might have been less than optimal).

The clip below is a small excerpt from the two-hour session, and features Sister Hatune. As most readers already know, Hatune is a nun in the Syrian Orthodox Church. She was born and raised a Christian in southeast Turkey, but her family fled to Germany to escape persecution. She now runs a foundation that ministers to victims of religious persecution. Sister Hatune’s principal mission is the thousands of little girls who are assaulted, raped, tortured, and mutilated by Islamist terrorists and jihad fighters. She also ministers to refugees fleeing the civil war in Syria.

In this excerpt, Sister Hatune tells the story of two little boys in Germany who had once been friends. Then the little Turkish boy started taking Koran classes, and learned that he was not allowed to make friends with Christians and Jews. Sister Hatune describes what happened after that.

One thought on ““Get Away! You’re a Dirty Gavur!””