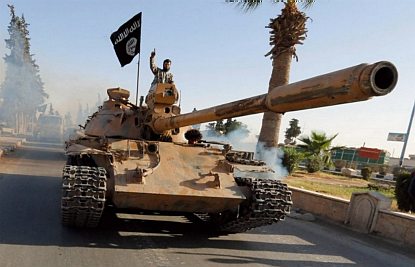 The oil fields and refineries it held by the Islamic State provide it with an estimated one to three million dollars in daily income. Before that slush fund was available to it, it relied on other sources of revenue, including secret transfers from various foreign intelligence services.

However, based on the following ANSA report, at least some of the money for ISIS was fraudulently diverted from European VAT accounts to financial brokerages for Islamic terrorism:

Some 38 people with ties to Anglo-Pakistani and French-Israel groups are suspects in the alleged fraud scheme, which authorities said includes the illicit transfer of value-added tax to accounts in Cyprus, Hong Kong and Dubai.

As well, funds were allegedly converted into luxury goods such as diamonds and real estate for use in financing armed groups. Eleven suspects are being sought by authorities.

In addition to money, Europe is supplying a significant number of mujahideen for the cause in Syria and Iraq.

Flow of EU Combatants to ISIS ‘Never Been Greater’

ISIS currently numbers 31,000 fighters, has the capacity to control water and oil supplies, and finances itself to the tune of $2 million a day thanks to oil racketeering, according to de Kerckhove.

An estimated 3,000 men and women have left Europe to join ISIS on the front lines in Syria and Iraq, he added.

More and more women are joining up, some because they won’t be parted from their male relatives and some to take on logistical and military roles, de Kerckhove told the committee. “ISIS is a true threat to the international community,” he said.

So the women have “logistical and military roles”, eh? Might those roles include acting as “temporary wives”, i.e. the Islamic version of “comfort women”?

The fatwas justifying such roles have already been issued by ulema in Saudi Arabia and elsewhere.

One thought on “European Funding and Manpower for the Islamic State”