Below is the intervention read this afternoon by Elisabeth Sabaditsch-Wolff, representing Bürgerbewegung Pax Europa at the OSCE Human Dimension Implementation Meeting, Session 13: “Tolerance and non-discrimination II, including prevention and responses to hate crimes, aggressive nationalism and chauvinism”. 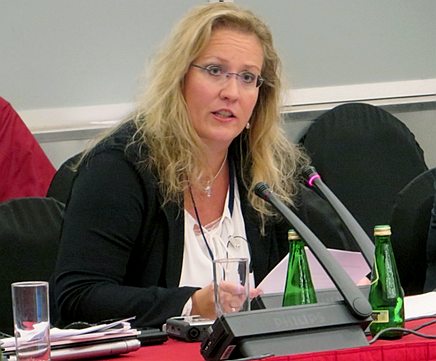 To the Austrian Delegation

BPE is gravely concerned about the threat emanating from the Islamic State (IS), which, according to a professor for Islamic pedagogy at the University of Vienna, “from a theological perspective, [is] 100% legitimate”. IS has led a number of Austrian men and women to travel to Syria and Iraq in order to fight alongside IS, leading the Austrian government to introduce even stricter laws with regard to freedom of speech.

There are currently efforts to relaunch the Law on Islam. This is laudable, especially since the draft includes a demand for the disclosure of Islamic teachings and beliefs in the German language (Koran and Hadith).
We support the efforts of the Austrian Minister of Foreign Affairs, who has already called for the publication of an official German translation of the Koran.

Recommendation to the Austrian Delegation